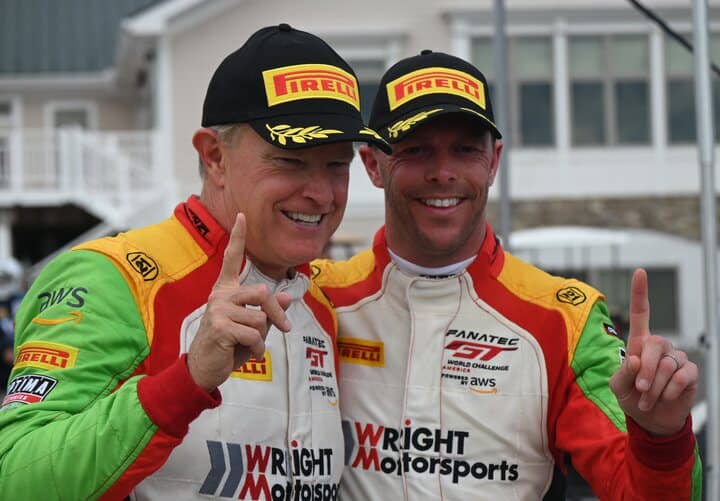 WATKINS GLEN, N.Y. – A series of left front tire issues in the final 25 minutes of the race Saturday put Wright Motorsports’ Jan Heylen in the overall lead in his Pro-Am class Porsche.  He held off a late charge from Crowdstrike Racing with Riley Motorsports’ Colin Braun to claim victory in Fanatec GT World Challenge America Powered by AWS Race No. 1 at Watkins Glen International along with teammate Charlie Luck.  It is the first overall victory for both drivers.

“It was a fun race like it should be with lots of pressure from behind,” Heylen said after the race.  “Charlie [Luck] did a really good first stint.  Feels good to be back on the top step of the podium.”

K-PAX Racing’s Michele Beretta led from the pole in his Lamborghini Huracan GT3 Evo.  The start ended up being a substantial scramble after Winward Racing’s Russell Ward did not get a good start.

US RaceTronics’ Steven Aghakhani was able to sweep past into second at the start, but lost second to Turner Motorsport’s Michael Dinan at the Inner Loop.  While the battling continued on-track, Zelus Motorsports’ Jeff Burton spun his backup Lamborghini in turn 7 and appeared to high-center the car on the curbs.

The incident brought out the race’s first caution.  Luckily, Burton was able to extricate himself and continue, but this ended up being the least of his problems.

Shortly after the restart, K-PAX Racing’s No. 3 Lamborghini with Misha Goikhberg driving slowed on-track with a misfire.  This actually drew another caution as Goikhberg limped the car back.  He eventually got to the aid of his crew, but ended up nine laps down.

The trouble for Burton only got worse as he appeared to clip the grass under braking for turn 8.  This spun Burton’s Lamborghini head-on into the Armco Barrier and brought out the third yellow of the race.  Burton was ok, but the team is looking at a big rebuild in order to have a car available for Burton to drive on Sunday.  The car wrecked here was Burton’s car for GT America after Burton wrecked the primary car in qualifying Saturday morning.

In Pro-Am, Crowdstrike Racing with Riley Motorsports’ George Kurtz, fresh off of his victory in GT America Race No. 1, started from the pole.  However, the opening lap scramble saw BimmerWorld Racing’s Chandler Hull come to the lead.

Hull appeared to have strong pace, but extremely bad luck.  Shortly after the first full course caution, the trunk latch broke on the BMW M4 GT3.  As a result, the back of the trunk flipped up.  This is bad for aerodynamics, so Hull began to drop back.

On the restart from the third caution, Hull pitted to try to get the trunk rectified.  The first try under green did not work.  Later on, the team simply took the trunk off of the BMW.

These issues elevated the Acura of Racers Edge Motorsports’ Ashton Harrison to the class lead with Wright Motorsports’ Charlie Luck not too far behind.  Harrison was able to lead easily to the mid-race stops.  Once Mario Farnbacher got in the car, he managed to expand the advantage to over seven seconds.

Victory was far from guaranteed for the Acura squad and it did not come on this day.  With 23 minutes remaining, Farnbacher cut his left rear tire.  That allowed Heylen to move into the class lead with Braun giving chase.  Further back, Bill Auberlen was able to drive his trunkless M4 up to third in class, but an unscheduled stop with 10 minutes to go for a tire issue dropped them back down the order.

On the restart, Beretta came under significant pressure for the lead from Dinan.  Dinan went to the inside of Beretta entering the Inner Loop, but Beretta refused to give the BMW much in the way of room.  As a result, Dinan effectively got nerfed off the road.

Later on, the No. 1 team was assessed a 60-second stop and hold for these tactics, ending the team’s winning streak at 11 straight races.  By the time they finished serving the penalty correctly, Andrea Caldarelli was a lap down.

Watching this mess was Ward, who was running third.  He was able to get past Dinan (who was in the grass), then swept around the outside of Beretta to take the overall lead.  Ward would hold onto the advantage until the mid-race pit stops.

The pit stop was something of a disaster for Winward Racing as the crew had some trouble with the left front tire.  That was all that Spinelli needed to take the overall lead.  With Spinelli’s pace in practice Friday and qualifying Saturday morning, things looked good.

Ellis was never able to get up to Spinelli’s rear bumper.  With 15 minutes to go, Ellis cut his left front tire and was forced to make an unscheduled pit stop.  From there, Spinelli should have been able to relax.

Not so much.  Spinelli also fell victim to a cut left front tire and had to pit with six minutes to go.  A 21-second lead went to waste.

That gave the overall lead to Heylen, who had Braun right up his rear end for the lead.  Braun was able to slowly make up ground on Heylen and got within striking distance on the final lap.  Exiting turn 11, Braun was right on Heylen’s rear wing, but could not prevent the Wright duo from taking the win.

Heylen and Luck’s margin of victory was a mere .179 seconds over Braun and Kurtz.  RealTime Racing’s Michael Cooper and Erin Vogel came from the rear of the field to finish third in Pro-Am, followed by DXDT Racing’s David Askew and Dirk Mueller.  Askew and Mueller’s teammates Bryan Sellers and Scott Smithson were fifth.

With all of the chaos, Dinan and Foley ended up winning the Pro class in third overall.  They were 25.682 seconds ahead of Spinelli and Aghakhani after their late stop.  Ellis and Ward ended up third.

Fanatec GT World Challenge America Powered by AWS Race No. 2 from Watkins Glen is scheduled to go green at 1:15 p.m. ET Sunday afternoon.  The race will be streamed live on the GT World YouTube channel.  It will also be aired via tape delay on CBS Sports Network at 6 p.m. Sunday evening.