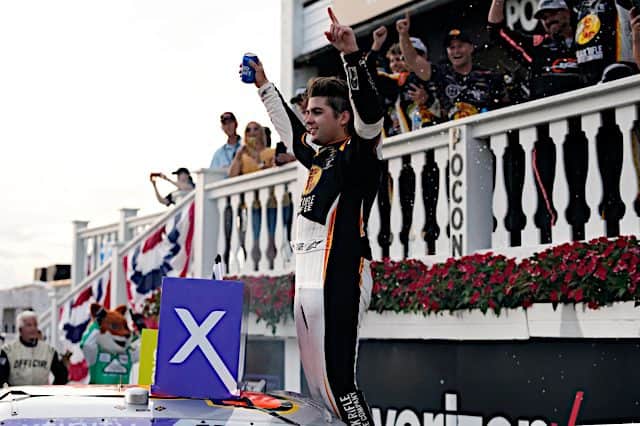 On lap 69, Gragson got by his JR Motorsports teammate Josh Berry to take the lead. Gragson then raced a clean battle with Gibbs to win his third race of the season and eighth of his career.

“That was probably the best I’ve ever driven there,” Gragson told NBC Sports after the race. “Damn, I’m wore out, it really wasn’t that hard of a race. Working my ass off there to keep the (No.) 54 back, he’s pretty fast. Luke Lambert and the rest of this 50th Anniversary Bass Pro Shop/Black Rifle Coffee/True Timber team did an unbelievable job with coming down pit road there and putting four tires on.

Ty Gibbs also talked about his run in the closing laps.

“It definitely hurt us being on a tire advantage but I was so surprised being able to hang with the [No.] 9 when he was on rights,” Gibbs said. “Great car, just didn’t put it together, I feel like that was on my part I just made some mistakes. We’ll come back at it next weekend.

“I just put myself in a bad position there but I always love racing out here. Congratulations to the [No.] 9 team.”

“We both went in there side-by-side and I just lost my side force and got loose under him, but that’s racing,” Gibbs said about the battle. “I put myself in that position. I feel like I definitely have to look back and see what other options I had.”

The race saw some pretty big moments, both early on and in stage three.

Around lap 2, Rajah Caruth tried to slide up behind Alex Labbe coming off of turn 3 and didn’t clear him. Both cars turned left hard into the inside wall, ending their days early.

Big crash on the front straightaway. Both drivers of the No. 36 and No. 44 cars were able to walk away. pic.twitter.com/7RbrNCb5lc

Then in stage three, the Big One occurred when Santino Ferrucci got loose off of turn 3 and slid right in front of Ricky Stenhouse Jr. The No. 48 crunched its front nose and spun down across the track as Jeb Burton tried to thread the needle. Unfortunately, Burton ran out of room, getting tagged by Stenhouse and flipping over on his lid.

Another look at the bizarre crash that saw Jeb Burton going for a wild ride in the No. 27 car. #NASCAR

Burton was OK but did not finish for the second race in a row.

A couple of other drivers also had major damage from the accident, including Ronnie Bassett Jr. and Jeremy Clements.

Soon after the race went back to green, Sammy Smith got loose while racing with Landon Cassill and made slight contact before spinning around and rear-ending the wall.

Meanwhile, JR Motorsports swept the stages, with Allgaier taking the opening stage and Gragson claiming stage two. Allgaier ended up speeding on his last pit stop on lap 54, leaving him at the back of the field on the next restart. He recovered from this to finish seventh.

In the end, Gragson got back out in front and kept the lead from Gibbs.

The Xfinity Series turns left and right next Saturday, July 30 at the Indianapolis Motor Speedway road course. The race will air at 3:30 p.m. ET on NBC.

Noah had the car to beat. Gibbs had a car that might have done it, but not the tires.

Man, those crashes were brutal. Glad everyone is okay.

Burton was going to go down pit road but changed his mind and got crunched. Wrong decision.

I think Gibbs was surprised when he side-swiped Gragson heading to the tunnel turn and Gragson didn’t back off. That hadn’t happened before.

That was certainly a hard fought, & clean battle, & I do like clean hard racing.

But I do have admit, being as I’m not particularly fond of either one of them. I wouldn’t have been disappointed to have seen them take each other out. And hand the win to Berry, & I thought a couple times that was a sure thing, but they pulled it off so well done.