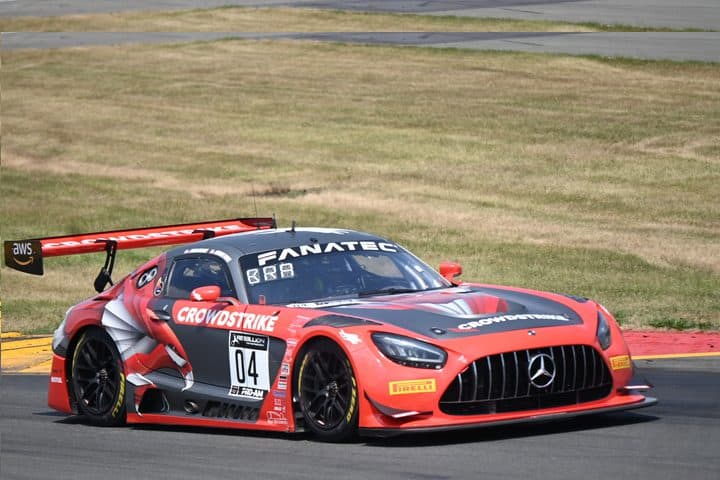 WATKINS GLEN, N.Y. – Crowdstrike Racing with Riley Motorsports’ George Kurtz ran down an ailing Russell Ward from 15 seconds back and took the overall lead with 90 seconds remaining. From there, he pulled away to claim an overall victory Sunday (July 24) at Watkins Glen for himself and Colin Braun.

US RaceTronics’ Loris Spinelli led a depleted field of 15 cars to green in a somewhat ragged fashion. A stack up nearly caused K-PAX Racing’s Andrea Caldarelli to run in the back of DXDT Racing’s Bryan Sellers. Despite this, the field got away cleanly for 90 minutes of racing.

Spinelli was able to open up a decent advantage on K-PAX Racing’s Jordan Pepper in the opening laps. Meanwhile, Turner Motorsport’s Robby Foley suffered a tire issue less than 10 minutes in, necessitating an unscheduled stop. He was able to resume at the rear of the field, 50 seconds back.

In Pro-Am, Triarsi Competizione’s Ryan Dalziel started from the class pole in fourth overall and was able to settle in there. He shadowed Philip Ellis in the Winward Racing Mercedes and held onto his position ahead of Braun.

Eventually, Ellis was able to run down Pepper for second. A fierce battle erupted as the two traded jabs at each other, bringing Dalziel and Braun into the fray as well.

Ellis was eventually able to get around Pepper for second. Dalziel was able to capitalize as well to move up to third and put Pepper between himself and Braun.

This was about as good as it got for K-PAX Racing. Pepper faded as the race continued on with an apparent rear diffuser issue. He was down to seventh by the time mid-race pit stops came around. Teammate Misha Goikhberg ended up having to make multiple unscheduled stop for repairs later on that left the team 13 laps down at the finish.

Eventually, Ellis was able to run down Spinelli for the overall lead, dragging Dalziel and Braun with him. The quartet battled hard up until the mid-race stops began.

Spinelli was the first to stop for tires, fuel and to hand over to Steven Aghakhani. Meanwhile, Ellis stayed out for an extra lap before his stop to switch over to Ward.

The key here was that Aghakhani stalled the car leaving his pit stall. That really hurt the US RaceTronics team. That, combined with a quick in lap for Ellis meant that when the stops were complete, Ward went from having a car in second to leading by eight seconds. Aghakhani actually came out of the pits in third, six seconds back.

Once Ward got the tires on his Mercedes up to temperature, he began to run away from the rest of the field. Aghakhani couldn’t keep pace as he dropped over 20 seconds behind. Meanwhile, K-PAX Racing’s Michele Beretta was running him down by more than a second a lap.

With under 10 minutes to go, Aghakhani’s Mercedes suffered a suspension failure exiting turn 1 that rendered the car un-drivable. He was able to stop just before turn 2 and back into the cutoff in the wall in order to prevent a caution.

Beretta was in third overall but had to pit in the final five minutes to take on a new left-rear tire. He was able to rejoin but ended up seventh overall.

Ward had a lead over Kurtz of 15 seconds and 25 over Aghakhani when things went wrong with the No. 33 Mercedes. It left him a sitting duck, allowing Kurtz to run him down and take the lead on the penultimate lap to take the Pro-Am and overall wins.

In the Pro class, Ward and Ellis held on for the class win in second overall, but Ward was visibly upset afterwards. He refused to do post-race interviews and left after the podium ceremony as quick as he could, leaving Ellis to do all the interviews.

In an interview with Frontstretch after the podium ceremony, Ellis indicated that the Winward Racing team was unsure of exactly what happened to the car. He did state that with 10 laps to go, Ward radioed to the crew and stated that he thought something had broken. Ellis thought that it could have been a suspension part beginning to fail or a tire issue.

In Pro-Am, Kurtz and Braun took the class victory by 7.675 seconds over Farnbacher and Harrison with Auberlen and Hull right on their tails.  Dalziel and Wetherill were fourth, while Wright Motorsports’ Jan Heylen and Charlie Luck (Saturday’s overall winners) were fifth.

Ward and Ellis ended up 38.878 seconds ahead of Caldarelli and Beretta after their late stop. Foley and Michael Dinan ended up third after their early stop.

Fanatec GT World Challenge America Powered by AWS teams will take the next three weeks off. Round No. 9 of the series will be Aug. 20 at Road America. That race is scheduled to go green at 3:15 p.m. ET and will be streamed live on the GT World YouTube channel.