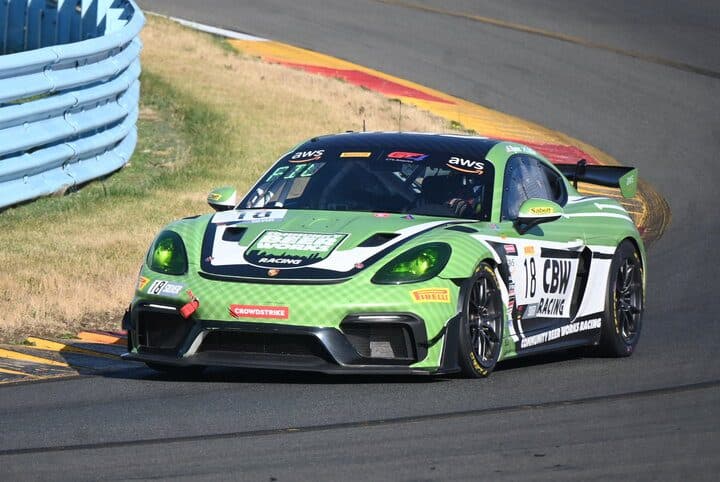 WATKINS GLEN, N.Y. – Rennsport One’s Eric Filguerias was able to get past BSport Racing’s Bryan Putt with 10 minutes to go Sunday (July 24).  From there, he pulled away from the pack to claim his and teammate Stevan McAleer’s seventh Pirelli GT4 America SprintX victory of the year.  The triumph pushes the duo ever closer to the Silver class championship.

“Our Porsche was excellent today,” Filguerias told Frontstretch.  “The Supras were really fast, the BMWs were really fast.  The Astons were very fast off of the corner, so I just needed to be able to capitalize on the areas where we made the most speed.”

A caution was thrown early due to an incident in turn 6 that involved three cars.  Zelus Motorsports’ Matt Guiver had contact with Rennsport One’s Juan Martinez.  That sent Martinez into the Indian Summer Racing Porsche driven by Travis Washay.  Washay then spun and hit the tire barriers.

Washay, who is making his return to SRO America competition for the first time in several years, limped his Porsche back to the pits.  He was unable to continue.  Martinez pulled off in turn 8 with terminal damage to his Porsche.  As for Guiver, SRO America officials parked him for the contact, a rare move after the series instituted a crackdown following a wreck-strewn weekend at VIR.

Telitz continued to lead until a bizarre failure occurred.  The left rear wheel came off of Telitz’s Toyota GR Supra GT4 and bounced down the track and came to rest in the middle of the track.  With Telitz also stalled in the Esses, the second full course caution was thrown with 36 minutes to go, just before the pit window was going to open.

Koch inherited the overall lead after Telitz’s issues with a delayed start to the pit window.  Flying Lizard Motorsports’ Andy Lee was right there, while John Capestro-Dubets was third with McAleer on his tail.  Teams also had to deal with sprinkles falling.

Conquest Racing’s Michai Stephens stopped relatively early to swap over to Gavin Sanders, but they were the exception to the rule.  Most of the leaders pitted with just under 20 minutes to go for their driver change.

Putt was able to keep the overall lead over Flying Lizard Motorsports’ Elias Sabo after the stops, but it was Filguerias that was on the move.  He was able to get past AutoTechnic Racing’s Tom Capizzi for third overall, then immediately chased down Sabo for second.

Over the final 10 minutes of the race, Filgueiras pulled away from the pack to give himself and McAleer their third weekend sweep of the year.

The overall margin of victory was 6.881 seconds over Capizzi and Capestro-Dubets.  ARG/Rotek Racing’s Lau and Billy Johnson were third, then Sabo and Lee.  SMOOGE Racing’s Kevin Conway and John Geesbreght were fifth.

In Silver, Filguerias and McAleer’s margin of victory was 8.633 seconds over Conway and Geesbreght.  Sanders and Stephens were third, followed by Dexter Racing’s Ryan Dexter and Dominic Starkweather.

In Pro-Am, once Filguerias drove by everyone, the race came down to a battle between Putt and Capizzi for the win.  With under five minutes to go, Capizzi was able to get alongside exiting turn 1.  The two drivers ran side-by-side through the Esses before Capizzi was able to clear him.

Sabo followed Capizzi past into second while Edgar Lau entered the mix.  The Silver entries of Conway and Sanders also caught up with the battling.

Capizzi was able to hold on to take the Pro-Am win for himself and Capestro-Dubets.  They were ahead of Johnson and Lau, who just edged out Sabo and Lee at the line.  Putt and Koch were fourth, while Premier Racing’s Adam Adelson and Elliott Skeer were fifth.

In the Am class, BimmerWorld Racing’s James Clay and Charlie Postins finished 12th to claim the Am weekend sweep.  They were .535 seconds ahead of KRUGSPEED’s Anthony Geraci and Jaden Lander at the finish.  AutoTechnic Racing’s Alex Filsinger and Rob Walker were third, then NOLAsport’s Alain Stad and Matt Travis.  Random Vandals Racing’s Al Carter and Paul Sparta recovered from Saturday’s crash to finish fifth.

Pirelli GT4 America SprintX teams will be off for the next three weeks before returning to action at Road America.  Race No. 1 there is scheduled for 5:05 p.m. on Aug. 20.