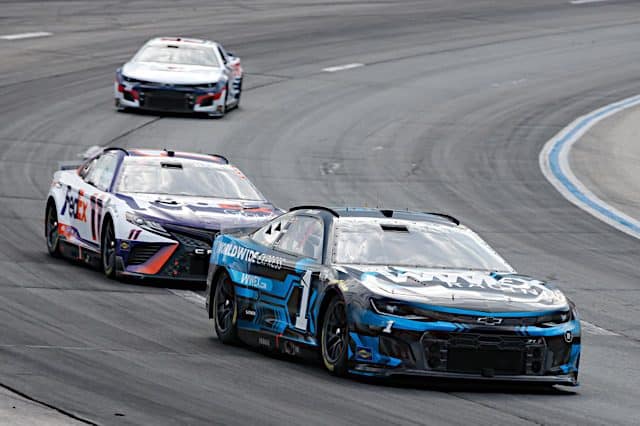 Denny Hamlin and Ross Chastain have seen quite a bit of each other over the last two months, haven’t they?

World Wide Technology Raceway at Gateway, Atlanta Motor Speedway and now Pocono Raceway have all featured run-ins between the Nos. 1 and 11, the latter on Sunday (July 24).

On a late-race restart in the M&M’s Fan Appreciation 400, the duo restarted first and second, Chastain scored the leader after a previous green-flag pit stop leapfrogged him ahead of then-leader Kyle Busch while Busch’s teammate Hamlin sat second. As the pair went side-by-side into turn 1, Hamlin drove his No. 11 in deep, made contact with Chastain and the No. 1 sideswiped the wall, spinning into traffic and damaging Kevin Harvick‘s car.

Denny Hamlin runs Ross Chastain up the racetrack and into the wall! #NASCAR

It marked the third run-in between the two drivers since the June 5 race at Gateway, where a tap from Chastain sent Hamlin into the wall and Hamlin subsequently did everything he could to hinder Chastain’s progress the rest of the afternoon.

Things quieted down for a bit until Atlanta, where close racing ended with contact between the two and sent Hamlin wrecking yet again.

Hamlin said he’d “reached his peak” after the second incident, reiterating as much after Pocono on Sunday afternoon. After the contact, Hamlin outdueled teammate Busch for the victory (though Hamlin later disqualified, awarding Chase Elliott the win), and was showered with a mix of cheers and some evident boos as he exited his car after a burnout.

Hamlin was asked if the contact was straight payback to Chastain.

“I mean, what’d you want me to do?” Hamlin said. “What’d you expect me to do? We got position on him and he just ran out of racetrack.”

"What did you want me to do?"@dennyhamlin addressed how he raced Ross Chastain late at @PoconoRaceway en route to his win. #NASCAR pic.twitter.com/6d98WVbpfT

Asked if it was over, Hamlin’s frustration – not just with Chastain – was evident.

“We’re gonna just keep racing hard until we get the respect back from these guys. It’s not just that – we’ve been wrecked four times, twice while leading, in the last 10 months. I’m at the end of it.”

Chastain, for his part, admitted he was probably owed some payback.

“I think that’s something that’s been owed to me for a few months now,” Chastain said. “I’m proud of the effort by Trackhouse […] to keep bringing bullets like that and keep bringing fast cars.

“[…] I’ve been owed that and probably some more for a few months now. Yeah.”

Asked if the score was settled, Chastain paused for a moment and then lightly chuckled.

.@RossChastain has a perspective on the contact with @dennyhamlin 👇 pic.twitter.com/EaJgfkvrt0

Both drivers are securely in the playoffs, Hamlin now with three wins to Chastain’s two.

Hamlin has a lifetime excuse for racing Chastain hard Chastains success is a result of his over aggressive driving style and driving mystifyingly fast race cars. ‘He will continue to make enemies on the track
The Houdini award for magical turn arounds goes to
Trackhouse Racing. They have purchased a mid level team and turned it into the team to beat all of this with overly aggressive and previously underachieving drivers who are now both winners!

As much as the racing press is trying to play this “rivalry” up (no offense Adam), Chastain-Hamlin will never rise to the level of Petty-Pearson or Earnhardt-Gordon. With NASCAR mandating that 30 drivers be able to win on a given week, no driver will ever be allowed to stand out from the pack enough to form an anti-fan base anymore.