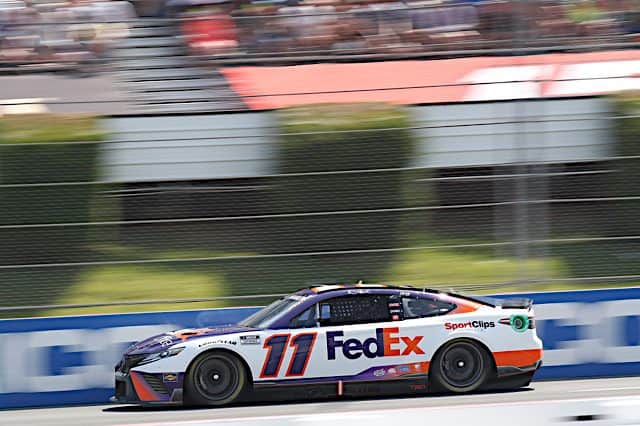 This Sunday (July 24), in the M&Ms Fan Appreciation 400 at Pocono Raceway, Chase Elliott became the 2022 Cup Series season’s first four-time winner, extending his streak of consecutive top-two finishes to five. With the win, his 17th career victory, Elliott extended his lead in both regular-season and playoff points.

Except Elliott never led a lap. The No. 9 Chevy was third when he took the checkered flag.

For the first time in the modern history of the NASCAR Cup Series, the driver who crossed the start/finish line first, Joe Gibbs Racing’s Denny Hamlin, along with his teammate Kyle Busch, were disqualified in post-race inspection, handing the win to Elliott.

NEWS: The Nos. 11 and 18 cars have been disqualified following post-race inspection at @PoconoRaceway. @chaseelliott has been declared the winner of today’s race. pic.twitter.com/KRFaZ4x5hP

With the win, Elliott extends his regular-season points lead over second-place Chastain to 105 points, with Blaney a further six back.

Making his Cup Series debut as a replacement for an injured Kurt Busch, 19-year-old Ty Gibbs cracked the top 15 late in the running but faded to a still-impressive 16th.

Getting disqualified out of a race win capped off an up-and-down day for Hamlin. He started in pole position, but immediately hit the wall on the first lap, later spun out in stage two and wasn’t sure if he’d have enough Sunoco fuel to get to the end.

Despite the early setbacks, strong strategy calls from crew chief Chris Gabehart brought Hamlin back towards the front with 30 or so laps remaining. Except the one man standing between Hamlin at the checkered flag was Trackhouse Racing Team’s Ross Chastain.

With these two, it was only a matter of time.

On a lap 143 restart, Hamlin drove deep into turn 1, making contact and sending the No. 1 out of the groove and into the wall. As Kyle Petty said, Hamlin gave Chastain “just enough racetrack to wreck [him]self,” and the No. 1 Chevy did exactly that, bouncing off the wall and into the path of an innocent Kevin Harvick.

CHASTAIN INTO THE WALL! pic.twitter.com/WWZmlpQYGi

Chastain would fail to finish and Hamlin would lead the rest of the way home.

"What did you want me to do?"@dennyhamlin addressed how he raced Ross Chastain late at @PoconoRaceway en route to his win. #NASCAR pic.twitter.com/6d98WVbpfT

“What’d you expect me to do?” said Hamlin to NBC, before his eventual disqualification “we got position on him, and he just ran out of racetrack.”

Hamlin’s day began when he took the green flag and immediately scraped the wall on the exit of turn 1, handing the lead to second-place starter Kyle Busch. On a restart 12 laps later, Busch got way up the track in the very same turn, opening the door for Larson to make a three-wide pass for the lead, a lead he refused to relinquish the rest of the stage.

Turn 3 was the trouble spot all weekend and it started just seven laps in. Austin Cindric spun his Team Penske Ford into the inside wall. While the No. 2 looked unharmed, two flat tires and a 2.5-mile tow truck ride tore up the aerodynamic underbody of the Keystone Light Mustang.

So when Aric Almirola looped his Mustang off the same corner, the Stewart-Haas Racing driver pulled a quick U-turn and drove to his pit box backwards.

That'll leave a dent in the No. 10 team's #NASCARPlayoff hopes. 😲 pic.twitter.com/n62hVz8zDo

The move left the NBC booth scratching their heads, but NASCAR just dealt the No. 10 a simple commitment line violation.

Larson won the stage under caution, his third of the season, but strategy calls from Bell, Wallace and others to hit pit road under green put a few new faces to the front to start stage two.

That second stage started with a series of quick cautions, including Hamlin’s single-car spin on the exit of turn 2.

Then, a spin for Corey LaJoie set Busch up to restart on the bottom and make a three-wide move to take the lead back on lap 49. Nine laps later, Wallace in third was the first of the leaders to pit, setting up a two-prong strategy battle with him, Busch and Larson coming up through the field while Jones, Ryan Blaney and Hamlin gambled on running long.

Then another spin for Ty Dillon shook up the strategy again. Almost everyone came down pit road to the benefit of Jones and Hamlin, but it was Busch who seized the lead on the restart to take the green-and-white checkered flag first, although Chastain in second would eventually be awarded the stage.

The final stage started out classic Pocono. Busch dragged out the field on a long green-flag run as Chastain followed right in his tracks.

Busch peeled off the track with 37 to go. The NBC crew was certain Busch would reclaim the lead by short-pitting the No. 1, but a slower stop and a lap in traffic meant that Chastain leapfrogged Busch to take net lead.

The money stop! 💰@RossChastain and the No. 1 crew earn the lead on the pit cycle! pic.twitter.com/qPabHirkMe

Just a handful of laps later, Busch’s teammate Hamlin got through into second and that’s when the fireworks began. Hamlin proved the master.

As its reputation might have suggested, Pocono saw more than its share of hard crashes. Adding to a tally of wrecks across practice, qualifying and the lower series.

First, some kind of right-rear failure sent Josh Bilicki backwards into the turn 1 wall. A scarily similar impact to the one Kurt Busch suffered in qualifying, Bilicki walked away and has since been checked and released from the infield care center.

A hard crash for Ryan Blaney with 23 to go added insult to injury after the No. 12 lost a lap repairing a flat tire in the final stage. Thankfully, Blaney too was unharmed, the Pennsylvania crowd cheering as the driver climbed from the car.

From bad, to worse. @Blaney's day done on a hard hit. pic.twitter.com/fm5wuM26SJ

Worse for Blaney, the crash brought Martin Truex Jr. to within 22 points in the regular-season standings. While both Blaney and Truex are currently scored in the playoffs, should any new driver outside the playoffs win between now and Daytona, whichever of the two is lower in points will miss the postseason.

Next week, the Cup Series runs the Verizon 200 at the Brickyard on Indianapolis Motor Speedway’s infield road course to cap off a doubleheader weekend with the NTT IndyCar Series. The fourth-to-last race of the regular season airs Sunday, July 31 at 2:30 p.m. ET on USA.

WOW- so the rest of the Gibbs cars were legal huh lololol
Karma Denny, still tied with Jeff Gordon at Pocono and that makes me laugh.

Yea, another chevrolet win, another non-chevrolet team penalized, banquet coming up, need to pay for those inflated pricey rib-eyes. As long as nascar continues to operate under the chevrolet/hendrick umbrella, Fords/Toyotas don’t stand a chance – they should get out of nascar.

Your copy and paste skills are impressive

Nobody does it better. LMAO

Does anybody wonder where the golden horse shoe is now?

I guess prayer only gets you through inspection in the southeast.