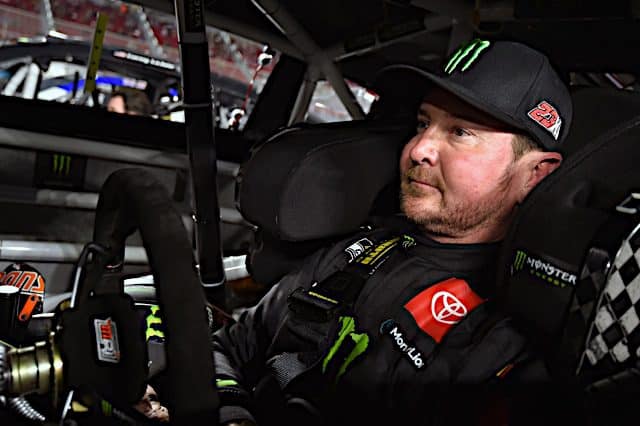 Kurt Busch and NASCAR announced on Twitter that, following a hard crash in qualifying for today’s (July 24) M&M’s Fan Appreciation 400, the 2004 series champion has not been cleared to take the green flag following an evaluation this morning.

Busch released a statement saying, “NASCAR has done a great job of putting the drivers’ health before competition and I respect the decision they have made,” citing “concussion-like symptoms” from the impact.

Stepping into the No. 45 McDonalds Toyota for 23XI Racing will be Xfinity Series points leader and 2021 ARCA Menards Series champion Ty Gibbs. The 19-year-old grandson of Cup Series team owner Joe Gibbs has won eight races in his first 35 starts in NASCAR’s second-tier series and finished runner-up in Saturday’s (July 23) Xfinity race at the Tricky Triangle. This will be his first start in NASCAR’s premier series.

Gibbs will be the youngest driver in the field when he takes the green flag just past 3 p.m. ET, as he was born in Oct. 2002.

I’m sure we’ll hear about him all afternoon.

And here we go….. I think Bill is right about Busch. Look around Kyle, who’s going to pay that huge salary !

He’s not as annoying as he was. I think he has received instruction regarding his attitude.

He still needs to have a “talk” with Jimmy Spencer.