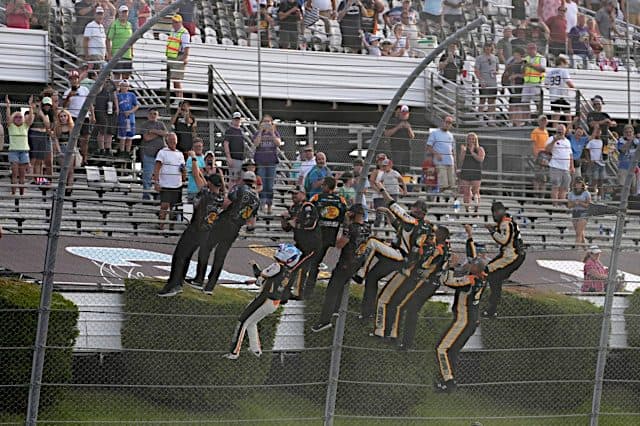 Noah Gragson took home his third win of the season yesterday as he crossed the finish line less than half a second ahead of Ty Gibbs at Pocono Raceway in the Explore the Pocono Mountains 225.

Josh Berry, AJ Allmendinger and Sheldon Creed rounded out the rest of the top five, while Justin Allgaier and Gragson took the points in the first two stages.

In the closing laps Gibbs, on old tires, tried to make a late-race run on Gragson, who was on much fresher tires on all four corners. Gibbs got door-to-door with the eventual winner, but eventually was forced to relent the position and give Gragson the win. A less-seasoned Gibbs might have turned Gragson, but in his first full year in Xfinity it’s apparent that the budding superstar has learned a lot.

Plenty of storylines grew during the 90-lap fiasco, but there were also just as many that flew under the radar.

First of all, Chevrolet. It’s no secret that they run the Xfinity Series, with the flagship JRM team sporting nothing but Camaros. However, it took them and plenty of others to place eight cars inside the top 10, including the race winner. So far on the year, Chevy has totaled 13 wins – more than twice that of Ford and Toyota combined. If that isn’t dominance, then I don’t know what is.

The final spot on today’s Winners list goes to Jeb Burton, for walking away from this horrendous crash unscathed.

Five cars were involved in the incident as Santonio Ferruci slammed into Ricky Stenhouse Jr., whose sliding Chevy then found Burton, flipping him on his roof and causing a slide that felt like it went on for an eternity.

You never want to see a situation in which a drivers needs the safety crew promptly, but thankfully, they did a phenomenal job in making sure Burton was safe and cleaning up the wreckage. Here’s to you Pocono safety crew – thank you.

Rajah Caruth is one of the best up and comers in the sport. He’s showcased his talents as a wheelman in ARCA this season and while he may not yet have a win, is currently the points leader for the regular season. Yesterday, however, Caruth’s outing in the Xfinity ride didn’t go as planned.

A huge hit early at Pocono.

Alex Labbe and Rajah Caruth were cleared from the infield care center after this crash. #NASCAR

Caruth was trying to clear behind Alex Labbe and flat out didn’t have the room he needed. It takes more than a few races to get used to these cars, and Caruth’s lesson this season has been just that. He might have came in dead last today, but the future is bright for Caruth, keep an eye on him going forward.

Possibly the most under the radar storyline from this week is that of Brandon Brown. Brown has been a part of Brandonbilt Motorsports since his beginning in the Xfinity Series. However, business realities now look to interrupt the tenure of the young driver competing for his blue-collar team. Brown tweeted this in the days leading up to the race.

Funding is something that just about all small teams struggle with, even more so in the Xfinity Series. As I’ve mentioned before, Brown is much more talented than most think. He’s an underdog, one with an absolutely huge upside, and I truly do think he has the ability to find a seat on a more established team with several openings expected this offseason.

JGR pulled out all the stops this week with this Pilot Flying J scheme that I think only works on the Supra body. The changing of the shades of yellow to red mesh perfectly in the A-pillars and almost make the front windshield look like its glowing. Was this the intent? Maybe not, but oh, well. I’m a fan either way.

Another week goes by and still, no new faces join the winners that are locked into the playoffs. Ty Gibbs still leads with four, while Gragson and Allgaier both have three. Allmendinger, Austin Hill and Berry all have two and Brandon Jones has his lone win from Martinsville.

Ty Gibbs or Noah Gragson. It seems to be all that anyone around the Xfinity Series is talking about, and for good reason. Both are red hot on the season, as Gibbs’s four wins have come in his rookie year, while Gragson has already tied his season-high for wins with plenty of opportunities remaining.

As the playoffs inch closer, though, it seems as though nobody is talking about Justin Allgaier. Now, before you shoot, hear me out here. The old saying goes “even a blind squirrel finds a nut every once in a while,” and with the success that he’s had this season, I’d say he’s more than just a blind squirrel.

He’s a wily veteran that has enough racing experience in his car to win at each and every track and the equipment to get him there. I don’t think anyone is writing Allgaier off by any means, but they certainly aren’t shouting his name from the rafters, either, and maybe they should be.

Next up, the Xfinity Series heads to Indianapolis Motor Speedway, the Brickyard, for the Pennzoil 150. Now full-time Cup driver Austin Cindric won the last time the Xfinity Series visited the Indy road course, where the famed curb wreaked havoc all weekend. That green flag drops at 3:30 p.m. ET and can be found on NBC and Sirius XM NASCAR.