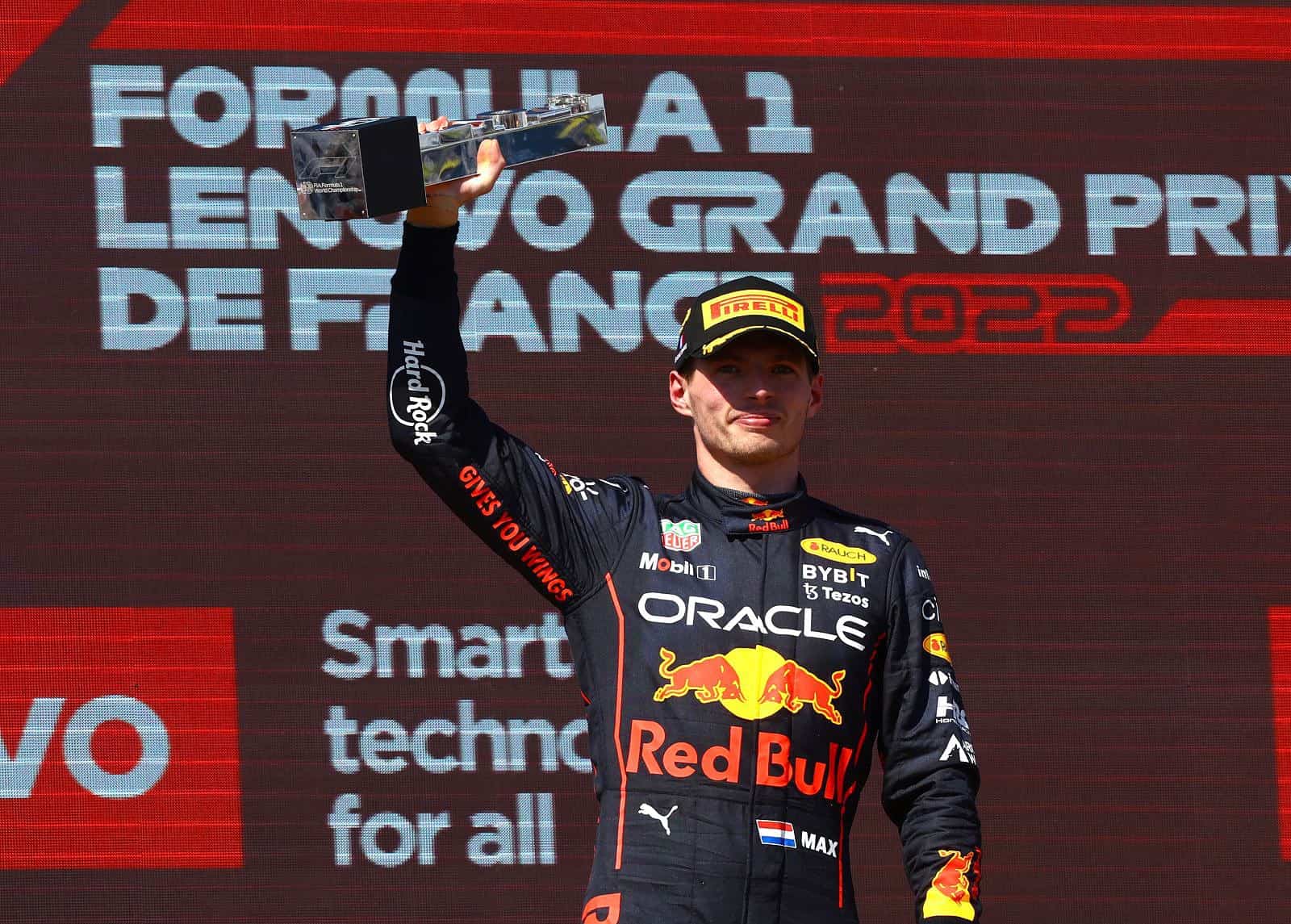 With 10 rounds remaining in the 2022 F1 season, defending series champion Max Verstappen has all the momentum entering this final stretch after winning the 90th Lenovo Grand Prix de France.

Verstappen pitted on lap 16, then inherited the lead under safety car after polesitter Charles Leclerc dramatically crashed out a couple of laps later.

“I think we had really good pace from the start,” Verstappen told F1 Media’s David Coulthard in the podium interview after the race. “I started putting pressure on Charles. Following around here in this heat, though, the tires were overheating a lot, I could never really go for a move, only once in turn 11.

“We tried to stay calm, stay close. Of course, we pitted a bit earlier. And then, from then onwards, you never really know how the race is going to go. The car was quick today, unlucky for Charles, I hope he’s OK. And from then onwards, I just drove my race, looked after my tires.”

Verstappen cruised on to the win, beating former championship rival Lewis Hamilton by 10 seconds. Hamilton enjoyed a solid second-place finish in his milestone 300th F1 start, a mark that only six have been able to pass.

In the closing laps of the race, a virtual safety car came out for the stalled car of Zhou Granyu. George Russell nipped Sergio Perez for third right as the VSC period was ending, and the Englishman held off the Mexican for the third step on the podium in the final three laps.

During the safety car for Leclerc’s crash, the entire field except for the cars driven by Verstappen and Zhou (due to their recent pit stops) pit. Of these drivers, only 12th-place finisher Pierre Gasly and Carlos Sainz took medium tires, as everybody else took hard tires. During the final 35 laps, Sainz worked his way up to third from ninth, but while he was completing a pass on Perez, the Ferrari team called Sainz to pit road.

After another lap out on track, Sainz did end up pitting with 11 laps to go for fresh mediums, and drove his way back up to fifth. There will be a lot of debate in the coming weeks on if Ferrari threw away a potential podium, especially given that Gasly was able to make it to the end of mediums.

In the final lap, Lance Stroll and Sebastian Vettel had a very close duel for 10th, trying to to be the lone Aston Martin driver finishing in the points on a weekend where AM celebrated the 100th anniversary of their first grand prix. At the end, Stroll stayed ahead of his veteran teammate and finished 10th, in spite of slight contact between the two in the final corner. Vettel ended up 11th.

As far as the championships are concerned, WDC standings now have Verstappen with a 63-point lead on Leclerc, with Perez now 70 points behind his Red Bull teammate in third. In WCC, Red Bull now has a mammoth 82-point lead over Ferrari, while Mercedes is 126 points back in third.

The next stop on the F1 world tour is the Hungarian Grand Prix on July 31, 2022. It will be broadcasted in the United States live at 9:00 am ET on ESPN.