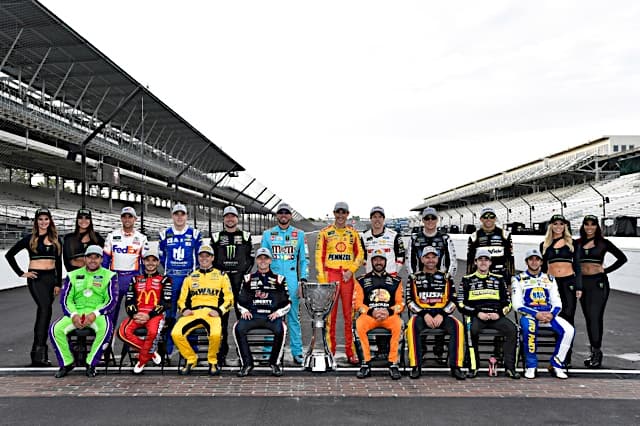 1. Should a win via disqualification count toward the postseason?

Luckily for series officials, the win being awarded to Chase Elliott, with both Denny Hamlin and Kyle Busch disqualified after failing post-race inspection, had minimal impact on the playoffs.

But what if it had happened the week before?

At New Hampshire, Bubba Wallace finished third. What if, theoretically, the top two finishers were disqualified there, instead?

If so, you’d have Wallace being awarded a win and postseason berth, so long as there wasn’t an eventual regular-season total of 17 different race winners.

First of all – can you imagine the vitriol directed at Wallace for having two wins – one shortened by weather and another due to someone else failing inspection? To quote ace Mayberry mechanic Gomer Pyle: “Shazam!”

Secondly – you’d have someone in the postseason not of their own win, but by way of someone else failing inspection.

NASCAR has rightly taken away wins for failing inspection. The race winner can be credited with a win and celebrate all they want, but a win as a result of another failed inspection should not count toward the postseason.

2. Are Hamlin and Chastain really even?

On one hand, you can argue that things are square between Hamlin and Ross Chastain after Hamlin ran Chastain hard enough to where he ran out of racetrack and a shot to win at Pocono.

Is the feud over? Time will tell, but I would not bet on it.

Remember, Hamlin and Chastain went at it at both World Wide Technology Raceway at Gateway and Atlanta Motor Speedway, though Atlanta was not in the same vein as Chastain noted his car was ill-handling prior to running into Hamlin.

But how much did Sunday really cost Chastain? He’s in the postseason, so not winning Pocono is not a huge hit. It didn’t do anything to impact his season. If something like this happens in the playoffs, however, it would.

And with Hamlin noting on Sunday that he’d still race Chastain how he’s been raced?

As Yogi Berra said, “it ain’t over till it’s over.”

By all accounts, this feud is not over.

3. Does making the postseason define success?

By all accounts, you could call the seasons that Ryan Blaney and Martin Truex, Jr. have had successful. Here were are in August, and on points alone they’re third and fifth in the standings, respectively. Ask any driver when they unload in February at Daytona, and they’d call that a successful season.

There’s just one problem. If neither of them win between now and Daytona and two other first-time 2022 winners do, then a strong points season would be for naught with someone else getting to the playoffs.

It’s a worthy contemplation. Would you rather have a solid year points-wise and not make the playoffs, or would you rather be a Chase Briscoe, Austin Cindric or Kurt Busch, whose season highlights have been one race win but, for the most part, also being unable to replicate that? Or take Michael McDowell. Sure, this is his most consistent and best overall year, but unless he gets a win he won’t be in the playoffs as he was in 2021 via a Daytona 500 victory. That year, he had five top 10 finishes compared to eight this year.

What if a driver has one race win but is out to lunch and not competitive in the first round of the playoffs? Would that be more successful of a season than being among the most consistent drivers but not making the postseason?

Regardless, both Blaney and Truex could nullify that concern in the next few weeks with a win.

4. Should the Road America Door Be Closed?

If there is one thing we have learned with NASCAR scheduling, it’s to never close a door. Darlington Raceway and Atlanta, both tracks that lost one of their two NASCAR weekends, have since gained one back. Even Nashville Superspeedway, dormant and written off, has found its way out of the wilderness after having now hosted its second full NASCAR weekend with all three series.

You may have noticed that with the Chicago Street Course announcement that the NASCAR Xfinity and Camping World Truck Series were not mentioned. Given that, there is no reason for NASCAR not to still have a footprint, albeit with a lower series, at Road America.

Would it be a slap in the face for these fans to see lower series with the Cup drivers down the road in Chi-Town? Probably. But it’s also worth the risk to still have a foothold in the Wisconsin market and cultivate that possibility so that when the time comes — if it comes — to return to Road America, it won’t be a cold restart for NASCAR.

5. Could the approval process be any vaguer?

Somewhere, fans of David Ragan are probably thinking, ‘do what, now?’

Late Saturday, 23X1 Racing was in a bind with Kurt Busch not yet cleared to race due to concussion protocol. Enter Ty Gibbs, with no experience in a Cup race whatsoever (sorry, simulators don’t count) who was quickly approved to race despite having no Cup experience.

Ragan, if you may recall, was blocked by NASCAR in his pre-rookie season from competing at larger tracks after various run-ins the race before at Martinsville Speedway, blocking him from racing at his home track of Atlanta.

Even today in the NASCAR Xfinity Series, it’s a chore at times for inexperienced drivers to avoid being rolling chicanes.

What’s the approval process? It depends, really. Either way, it’s not very transparent, and that’s a big problem.

Denny didn’t actually do anything to Chastain. He put him in a situation where Ross had a choice, lift or not lift, and he chose door number two. Hamlin probably thinks the feud is over. But given the right circumstances, Chastain will show him it’s not.

2) It is both drivers interests to put the feud behind them but that doesn’t mean they won’t race each other hard. If it carries on into the playoffs then they both lose.

5) NASCAR does what NASCAR wants.

This “feud” won’t get any close to Richard v Bobby.

NASCAR needs to take a hard look at the points system and make it better align by valuing wins and consistency more.

However, NASCAR needs to tank the “win & you’re in” criteria. A mid-packer pulling off a flukey win at the Spring ‘Dega race, but running bad the rest of the pre-cutoff events doesn’t deserve to be in the playoffs.

They also need to review the stage racing points awards. Really, only the top 5 per stage should get those stage points, with a 5 being the maximum. The stages aren’t consistent, with some of them being in the 25~30% total race laps range. The current stage points awards are too generous.