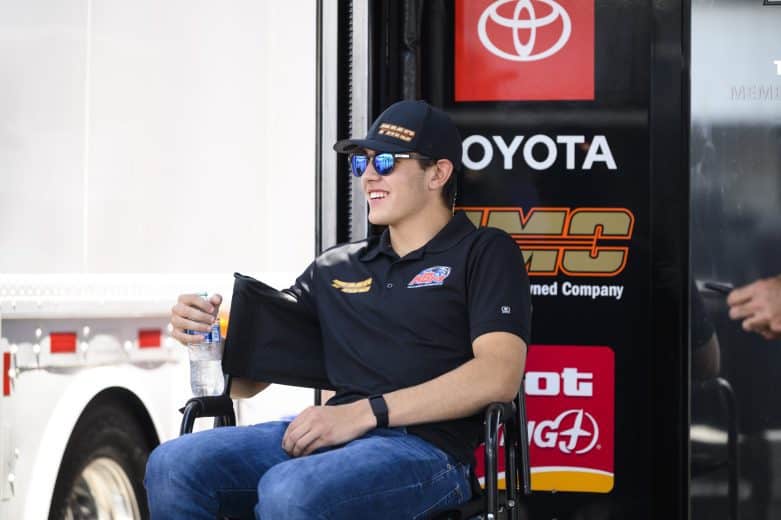 For the second time this season, the ARCA Menards Series ended a race early. This time, at Pocono Raceway, Taylor Gray was the beneficiary as he won the General Tire Delivers 200 for his third main ARCA victory this season.

Halfway through the season, the top three drivers are all separated by less than 10 points. Rajah Caruth leads Nick Sanchez by three points and Daniel Dye by nine points. Toni Breidinger is in fourth place, 64 points behind, and Greg Van Alst rounds out the top five, trailing by 72 points.

Sammy Smith won the pole, but he never contended for the win. Smith ran inside the top 10 for most of the race before a flat left-rear tire forced him to pit, finishing one lap down in 12th place. It is only his second-ever finish outside the top 10 in his ARCA career. Post-race, Smith exchanged words with Venturini Motorsports crew chief Shannon Rursch.

Smith trails Caruth by 171 points. With 10 races left, Smith would need to gain at least 18 points per race on his ARCA championship competitors. It is a herculean ask for sure, but Smith keeps the top spot in these power rankings thanks to his series-high 384 laps led.

Despite only competing part-time, Gray has the most main ARCA victories this season with three. He has won back-to-back races at two quite different tracks – a road course in Mid-Ohio Sports Car Course, followed by the Tricky Triangle.

Gray also has an advantage over his fellow ARCA drivers heading into the next ARCA event at Lucas Oil Indianapolis Raceway Park. He has competed there before. In the last ARCA race at that 0.686-mile short track, Gray finished fourth.

Winners at Pocono!! Thank you @dgr_racing and @FordPerformance for bringing fast race cars to the track every weekend! pic.twitter.com/kpyy7Nfw33

Although Gray has won back-to-back ARCA races, Sanchez has piloted a fast No. 2 Chevrolet. In fact, Sanchez could have won both races.

Caruth left Long Pond, Pa. disappointed with his outcomes in his two races there. In the ARCA race, he had a fast No. 6 Chevrolet, but his Rev Racing team brought him to pit road for fuel during the first competition caution. In the Xfinity race, Caruth wrecked on lap 4 and finished dead last (38th). Kudos to him for owning his mistake, though.

In ARCA, Caruth is still the points leader despite zero wins. How? Five top-five finishes, eight top 10s and zero DNFs have been Caruth’s recipe for success this season.

Yet again at Pocono, bad luck attempted to strike Dye’s No. 43 as his GMS Racing team had to check his Chevrolet for a potential motor issue. Dye quietly wound up fifth, four spots better than his starting position.

Caruth, Sanchez and Dye seem destined to battle for the ARCA title all the way until the checkered flag flies, ending the season at Toledo Speedway. Pocono showed that as all three drivers drove to top-five finishes.

IRP hosts the first race of the second half of the ARCA season. The track has hosted 13 ARCA races. How will the 14th affect these power rankings? We will find out on Friday (July 29) in the Reese’s 200, which will begin at 6 p.m. ET with TV coverage provided by FOX Sports 1.