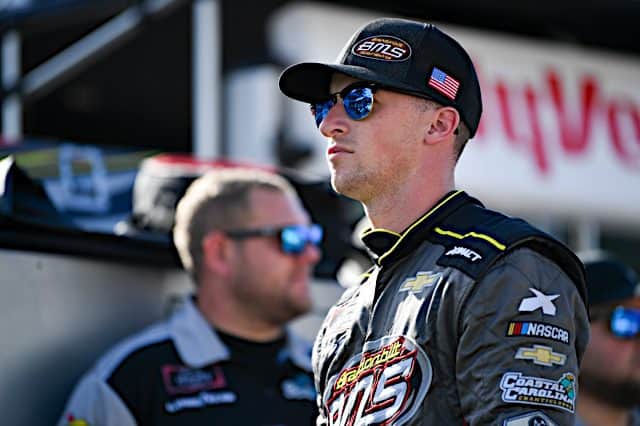 Brandon Brown is unlikely to return to his full-time role in the No. 68 Brandonbilt Motorsports Chevrolet after this weekend’s race at the Indianapolis Motor Speedway road course, Brown tells Frontstretch.

Brown, who was already scheduled to drive the No. 47 Mike Harmon Racing entry this weekend after having to step away from his usual No. 68, says financial issues stemming from lack of sponsorship caused the decision.

“As of right now, with all the nos that I’ve got in my sponsorship corner, I got to say that it looks like there will be other drivers driving the No. 68,” says Brown, who is only 66 points below the playoff cut line entering Indianapolis.

While the 28-year-old may not be planning to compete full time, he is looking to compete in select events for the remainder of 2022 — specifically at superspeedways.

“I’ll be back in the No. 68 for a handful of races,” he says. “Definitely Daytona [International Speedway]. I’ll be in the No. 68 in the post-season at Talladega [Superspeedway].

“Other than that? Nah, not really. The team is working on trying to sell some rides to other drivers to keep the funding, which, as heartbreaking as it is for me, I do understand what they have to do to keep BMS in operation … What it’s going to take to grow the No. 68 is having other drivers coming and finding success in it, too.”

While Brown may only be with Brandonbilt for a just handful of races going forward, that doesn’t mean he isn’t looking at other rides.

“I’m kind of differentiating myself from Brandonbilt Motorsports,” Brown continues. “I’m going to have to start working pretty hard to secure sponsorship for myself to maybe try my hand at some other cars. Maybe try and work into some different series.

“I feel like I’ve pushed the equipment to its potential. I feel that I’ve found a lot of speed in it and was able to prove myself in this car. Maybe now it’s time to allow others to jump in the No. 68 and start working on Brandon Brown as the driver and see where I land.”

It was announced last week that Austin Dillon will drive the No. 68 Chevrolet for the upcoming Xfinity race at Indianapolis.

Brown says that much of his sponsorship issues are from the repercussions of the politically based chant that stems from his name, which was manifested last October at Talladega.

“I’m still viewed as a political figure,” he says. “I can be viewed as divisive because of the chant. It’s really hard to convince companies that, ‘Hey, that’s not me. That’s just what the crowd was chanting.’ It does make it hard.”

In fact, it’s already affected him driving for other teams.

“Even looking at Indianapolis this weekend, I reached out to a lot of teams,” Brown says. “A team reached out and told me that basically it’s because of the partnerships they have [that he can’t drive for them]. Their current partners wouldn’t want to associate with what happened.

“So it does make it hard to find a seat. Because if you do find a seat, you’re going to be working with a team that has current working relationships and their partners are going to have to approve or disapprove with having Brandon Brown in the car.”

Brown has earned one top five and three top 10s so far in the 2022 Xfinity season. He currently sits 14th in the NXS standings.

Check out the full interview below.

I say call Trump. He’s got the money to rectify this situation.

On a list of things that will never happen, Trump spending his money on anyone but him is like #1.

Trump rarely pays contractors he owes or bails out his most passionate devotees. I’m not convinced he’d intervene to help this peon.

At the start of this, Brandon made a choice to not only associate his name and brand with LGBCOIN, which proliferated this, but to promote the branding in social media outlets as well. You have to lie in the bed that you make. I hope he can find a way to recognize that the sponsor can say as much about the driver, as the driver does the sponsor. Good luck to you sir.

Had it not been for Kelli Stavast, it wouldn’t be an issue. She literally politicized his name in that instance, rather than keep to herself on the issue. Now sponsors will sponsor, or not sponsor, Brandon Brown based on the politization of his name.

He literally had a sponsorship for the season. 🤷‍♂️🤦‍♂️

I could say that I have a million dollars in the bank, and it could be true until the bill comes due and it doesn’t clear.

He had a POTENTIAL sponsor for the year, but was unapproved by NASCAR. Lgbcoin and BrandonMotorsports put the cart in front of the horse and we’re not approved as sponsors for whatever reason.

Its a damn shame that so many companies have become woke. It is time to list the names of all these companies and make them go bankrupt by boycotting thier products. These companies are lying in bed with democrats and are ruining this country. SHAME ON THEM.

So companies wanting to stay apolitical and not wanting to associate their brand with someone who fully embraced a political stance is what woke means now?

Apparently you are living under a rock. Explain to me how Disney is not woke or how about all the companies who are paying for travel to states that allow abortion? If that isn’t associating themselves with a political stance than I dont know the meaning. You drinking the Kool aid too?

I fail to see how companies wanting to stay out of politics and not associate their brand with someone who dove in feet-first into a political message and spend millions of dollars on something that would limit their marketability is being “woke”.

And how does recognizing good buisness sense mean I’m either living under a rock or drinking the Kool aid?

Based on your comment, I think the best I can say is: “You keep using that word. I do na think it means what you think it means.”