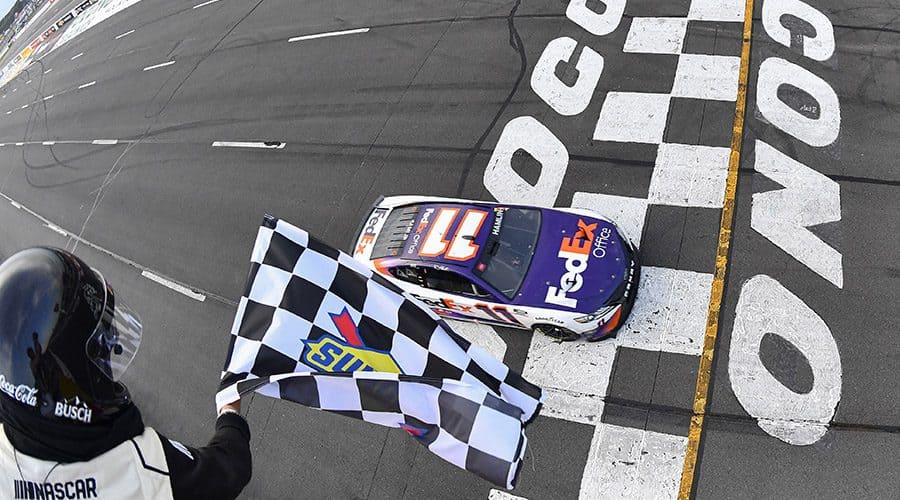 It was going to happen eventually.

Four years ago, NASCAR at long last instituted a rule that cars which failed post-race inspection, even race winners, would be disqualified.

That meant the driver and team who crossed the finish line first would have their victorious bounty revoked. That included almost every point – stage and playoff – they earned during the course of the event. They’d be relegated to a last-place finish, almost as if they never showed up at the track.

It’s happened in the sport’s Camping World Truck Series (sorry, Ross Chastain) and the Xfinity Series (Kyle Busch at Texas in 2020 and Denny Hamlin at Darlington Raceway in 2019).

But over the last four years, the hammer was never dropped (hey, I waited a year and a half, don’t judge me) on any Cup Series winners.

The closest we’ve come was Jimmie Johnson’s second-place finish in the 2020 Coca-Cola 600 being negated, an event that likely kept him out of the playoffs in his final NASCAR Cup season.

But it finally happened, this past weekend at Pocono Raceway.

Thanks to …. *check notes* … pieces of “vinyl” illegally placed on the front fascia of Denny Hamlin’s No. 11 Toyota and Kyle Busch’s No. 18.

I had never heard the term “fascia” before Sunday (July 24). It may be the least motorsports-sounding term I’ve heard in recent memory.

🗣️ "It was extra layers of vinyl that in effect, deviated the part from the approved CAD file."

🚨 #NASCAR SVP Scott Miller joined @DGodfatherMoody and specified what the issue was on the Joe Gibbs Racing cars of Denny Hamlin and Kyle Busch at @PoconoRaceway. pic.twitter.com/7rTyNARxVv

Miller said NASCAR was “very surprised” when it removed the car’s wraps and found “extra layers of vinyl that, in effect, deviated the part from the approved CAD file.”

No, this wasn’t your parents’ favorite 12-inch Elvis record. According to a statement from Joe Gibbs Racing, it was a piece of “clear tape,” measuring two inches wide and 5½ inches long with a thickness of 0.012 inches, that had been placed “over each of the lower corners of the front fascia ahead of the left-front and right-front wheel openings.”

Whether it was .012 inches or three inches, a non-properly vetted part of the “build process” in the Joe Gibbs Racing garage resulted in the first disqualification of a Cup winner since 1960.

It also gave Chase Elliott, who didn’t lead a single circuit of the 160-lap race at Pocono Raceway, his series-leading fourth win of the year.

Not that NASCAR’s Most Popular Driver is elated by the events that led to his win by default.

“I don’t really feel right celebrating someone else’s misfortune,” Elliott told reporters Monday morning. “It’s not necessarily something I’m proud of or something I’m going to boast about throughout the course of this situation.”

Elliott also said Hamlin could keep the trophy from Sunday if he wanted.

Were the aerodynamic advantages of those pieces of vinyl (err, tape) the difference-maker in Hamlin being able to come back from bouncing off the wall on lap 1 and spinning on lap 11 to get what would have been his third win of the season?

But rules are rules, right?

In the first year of the Next Gen car, NASCAR let everyone know it meant business when it came to enforcing rules. That was made clear with the penalty against RFK Racing’s No. 6 team that currently has Brad Keselowski 28th in the points standings with five races left in the regular season.

If the “vinyl” was a simple error, JGR’s penalty will likely have teams checking their checklists at the shop even more as the playoffs near.

Intent aside, it’s entirely possible that come an elimination race in the playoffs – Sept. 17 at Bristol Motor Speedway, Oct. 9 at the Charlotte ROVAL 0r Oct. 30 at Martinsville – that the playoff points lost by Hamlin (five) and Busch (one point from winning stage two) could be a glaring difference between advancing or elimination.

Then, members of JGR can break out the musical kind of vinyl.

Whatever it takes to keep the hendricknascarchevrolets at the top come bragging and banquet time !

RFK was fined and docked points for the same sort of violation, but not Holy Joe and his team?

And will Denny and Co. also suffer the same penalty as did Noah Gragson? Let’s see: Intentional? Y Wreck others in the aftermath? Y Seems a no brainer to me.

It was a simple error? They simply had identical pieces of tape under the wrap on both cars?

….and Elvis is sponsoring a comeback by Dale Sr next year

There is nothing done on any of these cars ‘by accident.’ The Director of Competition’s words are pure prose…brilliant in their admission of guilt, yet blaming a faceless process as being the culprit of what the whole garage knows is a highly sensitive area for aerodynamic performance. It also permitted Toyota’s response to be 100% above board. Hopefully Denny does something better with the trophy than Buck Baker did.

Personally I could never keep a trophy/prizes from an event I won unfairly. Memo to Chase – good on you, but this was not someone’s “misfortune”, this was someone caught cheating. On another note, nice job JGR! Clever way to add downforce to the kit car. I’m sure HMS and everyone else is removing all their hidden tape this week as well (that one for you Chief!). Wonder if we see the 23 and a few others suddenly lose all this magical speed found lately. I’m positive they are unhappy they were caught before Michigan and Indy..

Why is no one talking of the hard working racers and crew who got sccrewed out of glory by the cheaters who prevented them from being on camera, victory lane, after race interviews, etc?
Those were purpose placed pieces of plastic to gain an aero advantage. And they were more than likely on the #20,#23, #19, and the #45.
How do you think the #23 is “magically” running better than in his entire career?

The 23 needs all the “help” it can get, but it has to be undetected!

bubba said he’s getting better and so is his team. Is a plan already in the works to get him a win if they have the chance !

By switching from briefs to boxers?

It’s ‘old school’ to find an edge.
Newbies should get over it.

They say vinyl is making a comeback!

If this tape was under the wrap, why was not picked up in the pre-race inspection. Week after week we read about car going thru inspection and failing, maybe the inspector needs to be fired.

Bill B
Reply to  Bill W.

“The NASCAR pre-race inspection process sees every car run through the optical scanning station for measurement purposes. The extra tape was not discoverable by the inspection platform as it would require removing the paint scheme wrap.”

For one thing — it was clear vinyl tape.
They aren’t rookies, you know?

It must be a major embarrassment for M&Ms (Mars) to have their sponsored car disqualified for cheating.

Jill P
Reply to  Fed Up

And their sponsored race.

Probably something they should pray about.

My song suggestion would be Heartbreak Tonight

This really sounds more like a level 2 infraction to me.

Isn’t it Heartache Tonight as Denny and Baby Busch head to the Heartbreak Hotel, which was written for Elvis by Hoyt Axton’s mother. Hoyt is the Sheriff in Gremlins and a good songwriter in his own right.

I, for one, appreciate the “backyard engineering edge” of the Old Days.
I miss it, actually.

Imagine them trying to keep up with Smokey!

It would be interesting to know the details from an engineering viewpoint. I wonder if the tape was placed in such a way to bridge across a corner. For example, if you try to place a piece of tape in the corner of a room but don’t carefully push it into the corner it will stick to both walls and bridge, or smooth the corner. This would make an aero change with more thickness than the tape since there would be an air gap under the tape. However, it looks like the OSS would catch that. Regardless, I bet in testing at JGR, the clear tape stuck to the vinyl when it was pulled off, which would make it harder to catch, but during the teardown it stuck to the facia instead, making it visible… Just a theory.

You stated you’d never heard of the term “fascia” before. I’m really trying to not be rude but I probably will be… please read a book. Being into racing my entire life, I don’t even remember when I first heard it it’s been so long. My son, who’s 10 years old, knows what it means. My suggestion (and this is coming from someone with a degree in English) is in the future, do not let people aware of your lack of knowledge, because that’s what it looks like. Instead, look up the word, educate yourself, and move on. Sorry, that just really grinded my gears.