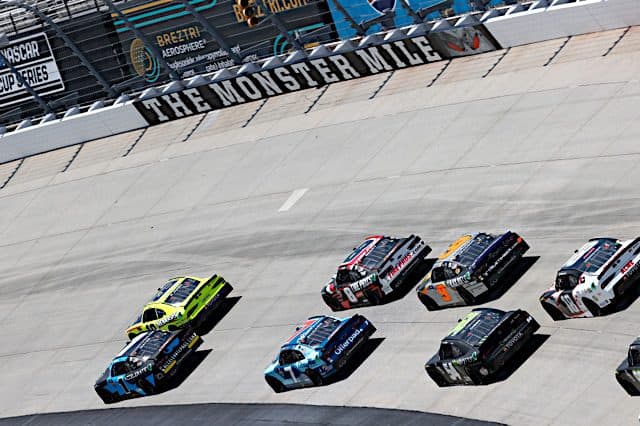 The finish to the NASCAR Xfinity Series race at Pocono Raceway last weekend was a thriller.

It featured Ty Gibbs and Noah Gragson running nose-to-tail for the final 20 laps with a side-by-side battle on the final lap for all the marbles. Gragson, who led 43 of the 90 laps and dominated the second half of the race, held off Gibbs for the eighth win of his Xfinity career and his third of 2022.

But it’s not just Gragson that’s having a career year; every driver for JR Motorsports is. Through the first 19 races, JRM cars have combined to win eight of them. The 2022 season is already the second-winningest season in JRM’s existence, and it’s not even August.

The winningest season? 2014, when their cars combined to win nine races as well as the driver’s championship with Chase Elliott.

It’s also worth noting that five of the team’s nine wins in 2014 came from NASCAR Cup Series drivers Kevin Harvick and Kasey Kahne. All eight wins this season have come from Xfinity regulars, which makes JRM’s 2022 power run all the more impressive.

In order for 2022 to become JRM’s winningest year on record, they just have to win two of the next 14 races. At the team’s current rate of success, its previous record will be shattered well before the season ends at Phoenix Raceway in November.

But it’s not just the win column where the team has dominated. It has also dominated in laps led, stage wins and top-five finishes.

Justin Allgaier currently leads the series with 534 circuits out front, while Gragson has the third most with 427. Josh Berry has the fourth most with 234, while Sam Mayer has 50 and Cup driver William Byron has added 29. With 1,274 laps led out of the 3,016 laps run so far, JRM has combined to lead 42.2% of the total laps this season.

For stage wins, JRM has an even greater monopoly over the rest of the field. They have won just over 55% of the stages this season, with 21 stage wins in 38 opportunities. That number is only continuing to grow; ever since the Xfinity race at Talladega Superspeedway in April, the team has combined to win 16 of the 22 stages — more than 70%.

For top-five finishes, Gragson leads the series with 10. Berry has the second-most top-five finishes with nine, while Allgaier and Mayer have eight apiece along with AJ Allmendinger, Gibbs and Austin Hill. When put together, JRM cars have combined to finish in the top five 36 times this season, including a race at Dover Motor Speedway where the team’s four full-time cars finished 1-2-4-5.

JRM isn’t just having a good season, they’re having an all-time great one. And if the recent string of wins and stage wins is any indication, its monopoly on the rest of the field has only grown as the season has progressed.

The most important part about JRM’s dominance this season is that it hasn’t been limited to one or two drivers; all four drivers have done their part. JRM cars currently occupy three of the top-five spots in the regular season point standings and four of the top eight. Allgaier has three wins, while Gragson and Berry have two apiece.

Mayer is still looking for his first win, but as a 19-year-old in his first full-time season, he has more than delivered with eight top fives this season. His first win will be just around the corner.

What’s also notable is that the team has looked fast at tracks where it used to be out to lunch. Allgaier has been with JRM since 2016, and he had combined to lead just eight laps at Charlotte Motor Speedway in his first eight starts with them.

He completely blew that total out of the water in May, as he led 63 laps at Charlotte while Berry led a race-high 89. JRM was completely untouchable at the end, as Berry won by more than 18 seconds over Gibbs after Allgaier had a flat tire while running right behind Berry with less than 20 laps to go.

See also
Brandon Brown Likely for Only 'Handful of Races' in No. 68 for Rest of 2022

In addition to Charlotte, Allgaier had combined to lead two laps in his previous starts at New Hampshire Motor Speedway with JRM. This season, he led 47 and went on to win the race. It was Chevrolet’s first victory at New Hampshire in Xfinity since 2007.

However, there are two types of tracks absent from the win checklist in 2022: a short track and a road course. The short track races at Richmond Raceway and Martinsville Speedway this season were dominated by JGR, as Gibbs won the former and Brandon Jones won the latter. However, Berry, Gragson and Allgaier have combined for six short track wins in their Xfinity careers, and they will absolutely be favorites at the three remaining short track events on the schedule.

For road courses, the first two were won by Allmendinger, who has continued to add to his record of eight road course victories in the series. The third race at Road America was dominated by Cup driver Kyle Larson until Gibbs got by him on the final lap.

If JRM has had a weakness this season, it has been on the road courses. Allgaier has three road course wins in his career, but his last came in 2018.

But that’s not to say that JRM has been unsuccessful on them in 2022, as all four drivers have had at least one top-five finish on a road course this season. It says an awful lot about JRM’s season when top-five finishes constitute its weakest performances.

The team will now have a chance to go for its first road course win of 2022 this weekend, as the series heads to the infield road course at Indianapolis Motor Speedway. With JRM on an absolute roll heading into Saturday, July 30, the chance is as good as ever for the team to grab the elusive win No. 9 on the season.