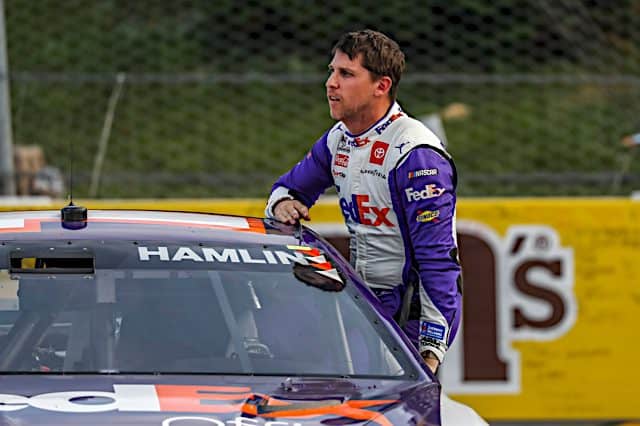 For years, race fans clamored for NASCAR to take the win away from a driver or team whose car was found illegal in post-race inspection after a victory.

For years, NASCAR resisted because they felt it was a crime that the driver and team who celebrate in victory lane have their win taken away for a minor infraction.

That happened this week. For the first time since 1960, NASCAR actually took the victory away from a Cup Series competitor after Denny Hamlin‘s No. 11 car was found in violation of the rules in post-race inspection at Pocono Raceway.

Naturally there would be a reaction from the masses. Many agreed with NASCAR’s decision while others were on the fence about it. We tossed this question up to our writers. Michael Nebbia and Stephen Strumpf battle it out in this week’s 2-Headed Monster.

NASCAR’s uniform procedure of disqualifying drivers that failed post-race inspection was first implemented in 2019.
Wins were stripped in the NASCAR Xfinity Series and Camping World Truck Series in the inaugural year of the rules. Cup drivers were also disqualified in 2019, but the winner was never caught red-handed. For more than three years, the driver that crossed the line first was the winner in the record books.
Until now.
And in lower series races where the original winner was stripped of the win, there was no issue with rewarding the trophy and race win to the highest legal car.
Until now.
See also
Dropping the Hammer: NASCAR's Disqualification by Vinyl
Chase Elliott may be the winner in the record books, but he has declined the trophy. Hamlin posted on Twitter, jokingly saying he would be selling the trophy on eBay. For now, it appears that NASCAR is not requesting to have it back.

If the winner doesn’t want the trophy, if NASCAR isn’t asking for the trophy and the disqualified winner gets to keep the trophy, then what is the point of disqualifying drivers in the first place?
It’s an awkward situation that only gets weirder when thousands of people left Pocono Raceway seeing Hamlin cross the finish line first and celebrate, only to learn that he hadn’t won the race at all. It’s also not ideal for fans of Elliott. He was the true winner of the race, but his fans did not see him celebrate, hoist the trophy or do burnouts on the frontstretch.
And if NASCAR’s points leader and most popular driver does not want the trophy after being declared the winner, it’s time to change the way that inspection failures are penalized.
The old punishment of a points penalty was largely a slap on the wrist. The only time the penalties hurt was when they came in the playoffs, where drivers have far less leeway in racking up bad days.
In order for a failed inspection punishment to be effective, the penalties need to be steeper.
For a driver that fails post-race inspection, the win or finish will stand, but they will receive inverted points instead. When Hamlin crossed the line at Pocono, he scored 54 points and five playoff points. In inverted points, he would pick up win No. 49, but he would receive -54 points and -5 playoff points as a penalty. The more successful a driver is, the harsher the punishment.
Had Hamlin passed post-race inspection at Pocono, he would be 16th in regular season points. In the system of inverted points, he would fall to 25th in points. He would also go from 17 playoff points to seven.
Of course, this wouldn’t be as devastating as it could be for Hamlin, who already has two wins and is locked into the playoffs. But if this was his first win of the season, he would go from a guaranteed playoff spot to all but mathematically eliminated unless he was able to win again.
Inverted points would also be devastating for drivers in the playoffs or drivers on the playoff bubble in the regular season.
Martin Truex Jr. currently has an 83-point cushion over Kevin Harvick for the final playoff spot. Now let’s say that Truex and Harvick hypothetically receive 50 points after the conclusion of a race. But if Truex was to hypothetically receive -50 points instead, he would go from an 83-point advantage to a 17-point deficit for the final transfer spot.
And the severity of these penalties get amplified to 11 in the playoffs, where the points are constantly reset. The loss of guaranteed advancement and an inescapable points deficit would end anyone’s bid to make it to the next round unless they won again.
If teams were racing under these rules, they would have second thoughts on using unfair advantages when the penalties are that much greater.  -Stephen Stumpf

The Punishment Fits the Crime

I do think the punishment fits the crime in terms of the Hamlin and Kyle Busch situation from this past weekend at Pocono. They were in violation for a clear rule and should have had the win taken away.
Who knows what kind of performance gain the Joe Gibbs Racing Toyotas got from their infraction, but they still broke a rule and there’s a reason it’s a rule. We don’t know the performance gain or the intent, but NASCAR can’t rule by that.
See also
FRM Appealing Pocono Penalty
It’s an unprecedented event, as we have never really seen anyone get a win taken away in Cup in the modern era. But it’s about time we have.
We need to ensure our champion and our race winners are 100% legal when they perform, and there’s not a better way to deter them than to whack them hard in the regular season.
Now teams know where the line is. They know that if something is wrong with their car and they win a race, the win will be taken away from them and they will be hit hard.
The Championship 4 will have in their minds what happened at Pocono and know not to push the issue too far on bending the rules. What happened this past weekend should be what is in the back of the minds of every team in the playoffs going forward. -Michael Nebbia

What?!!! No gas chamber or electric chair? LOL

It happens at short tracks all the time. Chase Elliott was disqualified after the 2013 Snowball Derby for having tungsten as his weight instead of lead, leading to Erik Jones’ second-consecutive victory. Christopher Bell was tossed in 2015 for a weight violation.

The win should be forfeited, but there should also be a stiffer points penalty. Teams with lesser infractions have been docked 100 points which ends up being a harsher penalty than this disqualification (loss of prize money notwithstanding, that is). Disqualify AND dock 100 points. That would hurt enough to make teams think twice about cheating — well, maybe.

Non-Winning teams also typically get a substantial monetary fine on top of the points loss, plus suspension of team members. So just losing the win and taking last spot points seems like a very light penalty considering NASCAR has to go to the race fans and change the outcome of the race after the fact. They supposedly pride themselves on the fans knowing who the winner is before they leave the track, so this adds another level to the cheating. Now NASCAR has to deal with upsetting the fans because of your cheating. IMO, if you win the race and have a violation that warrants being stripped of the win, the penalty should be much harsher than it would be for a mid pack finisher who violated the rules. I wonder what Carl Long thinks?

What is the difference between Hamlin/Bush penalty and Brad Keselowski penalty?

It’s like steroids in baseball. Would the player put up the numbers without the juice? We don’t know, but the mere fact that we have to ask the question should disqualify them.

Same thing here. Would Denny and Kyle have finished 1-2 without the advantage? We don’t know, but that we have to ask should take away the win. I don’t have a problem with it.

What would be happening if NA$CAR said Hamlin cheated but would be allowed to keep the win like Petty at Daytona?

Beer cans thrown at him?

Nothing really. They would be a laughing stock of everyone but it would blow over as soon as they do something else stupid. I’ll bet anything that nascar does something really stupid during the playoffs. They can’t help themselves.

It’s like they’re making a weekly reality TV series re-make of Dumb and Dumber starring themselves as the leads. They out-dumb themselves every time they make a decision.

Why wasn’t Hamlin and Bush gave the same penalty as Brad Keselowski?