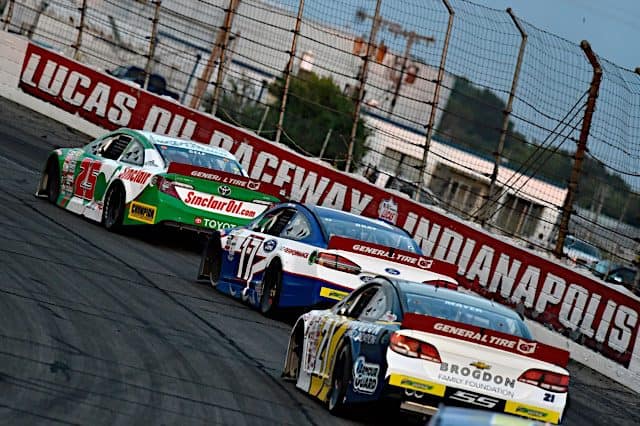 Lucas Oil Indianapolis Raceway Park (IRP) is the only track on the ARCA Menards Series schedule that the series did not visit last year.

It is back on the schedule this year though, and 24 competitors will race for 200 laps around the 0.686-mile short track in Clermont, Indiana.

Although this is his first ARCA start this year, Chandler Smith is atop the favorites. The NASCAR Camping World Truck Series regular hops into the No. 15 Venturini Motorsports Toyota for the Reese’s 200. Smith will use this race in preparation for the Truck Series playoff opener there , which will follow the conclusion of the ARCA race on Friday night (July 29).

“I suppose, because honestly turn 3 at Pocono and turn 1 at Phoenix — which I feel like I’m respectable at — are very similar to IRP as far as the banking and all, it’s pretty flat,” Smith said in a press release. “So I would never have thought of myself to be a good flat track racer, but for some reason if I look back on my history, I show to be pretty decent at those. I guess flat tracks are kind of in my wheelhouse a little bit. I don’t know why that is, but I have a good history with them.”

Tom Hessert will make his third and final ARCA appearance this season, back in the No. 55 Venturini Motorsports Toyota. In six starts at IRP, Hessert has three top fives and six top 10s, with a best finish of second in the 2012 race.

“IRP is a lot tougher,” Hessert told Frontstretch. “It’s harder to pass, it’s faster, harder on tires. Be competitive; we’re in a great racecar, have a good team and be in contention.”

Hessert seeks his first win this season and the seventh of his ARCA career. He has no intention of returning to ARCA full time, but this is the best series for him.

“ARCA was always just a great place for us,” Hessert said. “Great relationships with the people and the teams, lot of racetracks that I know and, in the stage of my career that I’m at, coming in for a few races this year, it’s great to come back and give it a shot.”

Sammy Smith is atop the Frontstretch ARCA power rankings, and he’s heading to a familiar track. Smith won the pole, led 53 laps and finished ninth in the late model JEGS/CRA All-Stars Tour race at IRP in 2019.

Taylor Gray has risen to second in the power rankings, and with good reason. He now leads ARCA with three victories, including back-to-back ones entering IRP, and he, too, has competed at IRP before.

Gray’s ARCA debut came at IRP in 2020. He started sixth, spun on Lap 129 and rallied back to a fourth-place finish.

“I’m super excited for IRP,” Gray told Frontstretch. “I really enjoy that place. We ran well there. I think we should have won or finished second, but Michael Self and I got tangled up with each other and we still finished fourth. I am excited.

“That’s when the ARCA series had a little bit more competition. It was harder to get through the field. We spun out, went to the back and drove back up to fourth. We were good last time we were there. Just got to go there and execute. We need to keep showing up to these racetracks and execute.

The Reese’s 200 is the 11th race of this ARCA season, beginning its second half. The top three drivers are all separated by less than 10 points with Rajah Caruth leading Nick Sanchez and Daniel Dye, in second and third place, respectively.

Rev Racing teammates Caruth and Sanchez both have struggled at the ARCA short tracks this season.

“I’m pretty excited to get back on a short track with our GMS [Racing] Chevy on Friday,” Dye said in a team release. “IRP looks like a fun place to race at with an ARCA car. I’ve never been there but looking forward to figuring it out.”

In his limited ARCA schedule, Connor Mosack has piloted the No. 23 Bret Holmes Racing Chevrolet to strong performances. Mosack has finished inside the top 10 in all five of his ARCA starts this year, and he has three top-five finishes, with a career-best finish of third this season at Iowa Speedway.

His team owner Bret Holmes has four top-10 finishes at IRP in four starts. In addition, Mosack’s crew chief Shane Huffman was the winning crew chief when Brandon Jones won the 2014 ARCA race at IRP. With knowledgeable people surrounding him, Mosack has a good shot at scoring his first ARCA victory.

Before the Reese’s 200, there will be a 45-minute practice session followed by single-car qualifying. The 200-lap race will have two competition cautions at laps 75 and 125.

I’ve been to Indy, but I’ve never been to IRP. But I know I’d much rather watch a race there than Indy, no matter what kind of cars they were running.
Sadly that’s where Rich Vogler was killed, but that’s not the fault of the track.

It will probably be one of the Smith’s. Sammy or Chandler.