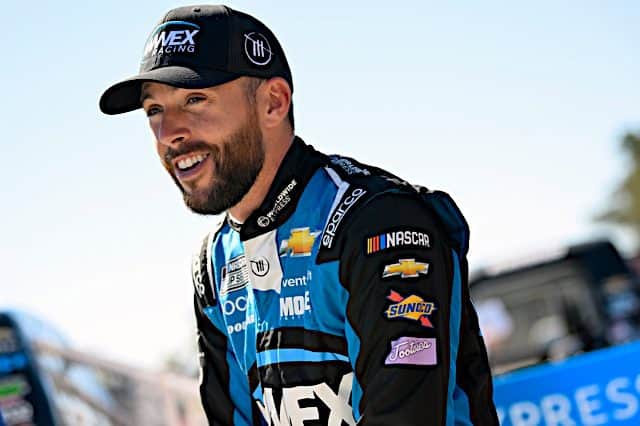 Did You Notice? … Ross Chastain and Denny Hamlin became the latest NASCAR rivalry in the spotlight this week, engaging in on-track payback at Pocono Raceway after a series of incidents earlier this year.

It’s clear Hamlin isn’t done with payback either, following post-race comments that make it clear this grudge is still in full effect.

“We’re just going to keep racing hard until we get the respect back from these guys,” Hamlin said. “It’s not just that, we’ve been wrecked four times. Twice while leading in the last 10 months, and I’m at the end of it.”

The drama from Hamlin-Chastain isn’t the only personality conflict percolating in the NASCAR Cup Series garage. Heading to another track where getting even is fairly easy and emotions run high — the Indianapolis Motor Speedway road course — let’s take a look at which tempers are still boiling under the radar.

Denny Hamlin – Chase Briscoe: It seems appropriate to start here, right, based on what happened last year at this track. Hamlin thought he had the road course race won at IMS until Briscoe spun out the No. 11 Toyota during a green-white-checkered finish. Briscoe, then a Cup Series rookie, did it after getting black flagged for cutting a portion of the racetrack.

At the time, Hamlin accepted Briscoe’s explanation but decried a “lack of situational awareness.” Since then, the relationship between the two drivers has only gotten worse; after contact at Texas Motor Speedway in October, Hamlin referred to Briscoe as a “f***ing idiot.”

Things even got personal between the two drivers, with Briscoe saying on Reddit that Hamlin had made fun of his wife Marissa’s miscarriage surgery before later apologizing.

Both men are expected to be fast again at IMS and are at a critical point in the playoff race. Briscoe needs a second victory to feel secure, sitting just two points ahead of Kurt Busch for the bubble position among one-race winners. If three new drivers win in the final five races, and Briscoe slips back, he’ll be knocked out of the playoffs despite his victory at Phoenix Raceway earlier this year.

Hamlin, of course, is heated following a post-race disqualification that wiped out his third win of an otherwise inconsistent Cup season. Expect fireworks if they come together again.

William Byron – Joey Logano: This one’s been boiling over since a Darlington Raceway finish where Logano flat-out pushed Byron out of the way to get the lead.

Byron, typically more of a mild-mannered driver, was livid over the ending of that race.

“He’s a piece of sh*t,” Byron was caught on camera saying. “[Logano] can’t f***ing win unless he drives through everyone.”

For his part, Logano felt the drivers were even, claiming Byron put him in the fence in order to squeeze by with the lead in the first place.

“It’s unfortunate to see a win be taken away from you on the last lap like that,” Hendrick Motorsports Vice Chairman Jeff Gordon said. “… Logano had a shot at him to do it clean and chose to do it a different way. … William’s got a payback coming to Joey at some point. That’s the way it works.”

Both drivers have combined for one top-five result since that fateful finish over the last nine races: a Logano victory at World Wide Technology Raceway in June. With both programs struggling, it won’t take much for tempers to boil over once again.

Austin Dillon – Brad Keselowski: The weird contact between the two at New Hampshire Motor Speedway last week, plus the anger surrounding it revolves around this wreck from Michigan International Speedway in August of last year.

At the time, Dillon was fighting for a NASCAR playoff spot and almost certainly needed to win to get in. He showed speed during the Michigan event, looking like a contender until the two made contact crossing the finish line in stage two.

“[My crew] built a rocket ship,” Dillon said of that car. “They really wanted this one, and I did, too. … The best racecar we brought to the track from RCR [Richard Childress Racing] this year, I feel like.”

Since that incident, Dillon has led a total of just 17 laps, his winless slump continuing while teammate Tyler Reddick has secured both a victory and a 2022 playoff spot. That’s more than enough to leave someone mad over past slights.

Keselowski hasn’t had a walk in the park either; a 100-point penalty early in the year for an illegal parts modification has turned 2022 into a virtual test session for RFK Racing. Without a top-five finish this year, frustrations are high within his camp, and it’s easy to see contact flaring up again.

Coincidentally, Dillon will be using Keselowski’s spotter TJ Majors when he races the No. 68 for Brandonbilt Motorsports in the NASCAR Xfinity Series this weekend at IMS.

“Maybe I’ll run into somebody in the Xfinity race, and he [Majors] can be on the other side of it,” Dillon said.

Austin Dillon says at some point he and Brad Keselowski can talk, but he is focused on Pocono. He did have a joke about having Keselowski spotter T.J. Majors next week when Dillon drives the No. 68 Xfinity car at Indy. pic.twitter.com/YQ9LeyM6Fc

The Field vs. Ross Chastain: I read with interest Chase Elliott’s comments on the Chastain wreck after Pocono.

“I honestly thought Denny was pretty nice about it,” Elliott said Monday. “He did run him up the track a little bit but he still left him some room there on exit after it was all said and done.”

There was no sympathy for Chastain. Zero. Keep in mind the two had a run-in as recently as June, when Chastain spun out the No. 9 at WWTR, part of a flurry of incidents with other drivers. The list of people who haven’t paid Chastain back is pretty long: Logano. Martin Truex, Jr. from Dover Motor Speedway (among other places). AJ Allmendinger from Circuit of the Americas. It’s not a good sign when the garage appears to be silently applauding the type of move Hamlin pulled on Sunday.

It also leaves Trackhouse Racing Team with a difficult assignment for the playoffs. Their best hope is to make a car fast enough with which Chastain can outrun all competition, virtually dominating a race in each round to earn a win that assures he’ll keep advancing. It feels like if Chastain’s in traffic, or if there’s any type of late restart, people are ready to get even when it matters most.

Christopher Bell – Kyle Larson: Here’s the wild card we haven’t heard much about over the past year. Longtime rivals on dirt, Bell was mad at Larson nearly a year ago at Watkins Glen International when contact between them left Bell spinning at the exit of turn 1. Larson went on to win the race, apologized for the contact but never actually cleared the air in private. That was all after Larson was irked by Bell spinning in front of him on the dirt at Bristol Motor Speedway a few months earlier, which ended both drivers’ chance at a win on a surface on which they excel.

Instead, Larson’s frustration that Bell never answered an apology text went public, causing Bell to exclaim Larson was “crying to the media” at IMS last year. The duo haven’t really been battling at the front together since; Larson went on to win the 2021 championship while Bell struggled over the course of that postseason and early 2022.

But now, both have a win on the year and are expected to contend deep into the playoffs. Could we see this duo flare up again at a track like Bristol Motor Speedway in the fall?

All of them.
We just don’t hear about them all. Especially the guys that normally run in the back.

McDowell has more top 10’s than bubba ! Of course he does, he’s a racer and bubba is a driver.

I hope the championship comes down to Chastain and Hamlin. Last lap last turn Chastain right on “Dinny’s” bumper ;)

Other then costing Denny the win it doesnt hurt him he already has two wins and is guaranteed a spot in the playoffs and Kyle is pretty much a lock to make it to ….So no harm no foul everyone moves on