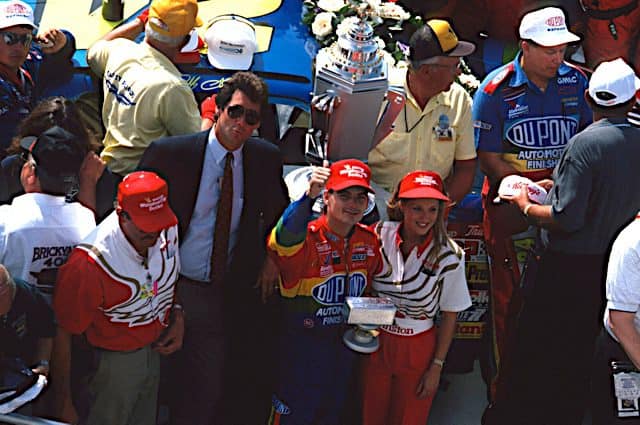 As NASCAR heads back home again to Indiana, 2022 marks the second year that the Cup Series won’t race on the Indianapolis Motor Speedway oval, but on the grand prix road course the facility boasts.

Last year’s Indy GP was not kind to the Cup cars, but the issues with the track have been repaired, and both NASCAR and the track are certainly hoping for a competitive race on Sunday, July 10.

NASCAR had established a slate of its most prestigious races in the 1980s when Bill Elliott won the Winston Million. That prize was for winning any three of the four top events: The Daytona 500 (the richest and most prestigious), the Coca-Cola 600 (the longest), the Winston 500 (the fastest) and the Southern 500 (the oldest).

Until 1994, those were the races every driver wanted to win above any other. Plenty of drivers also wanted a crack at Indy, but the speedway hosted just one race, the Indianapolis 500, and wasn’t interested in allowing other cars to even test on its surface, let alone race.

In 1992, the winds of change didn’t exactly blow with gale force, but there were breezes, in the form of a Goodyear tire test on the Indy oval. Nine drivers was a large number for a typical tire test, but it certainly was popular with fans and drivers alike, with thousands of fans turning out for the spectacle.

One voice of dissent was Kyle Petty, who said at the time that he didn’t think Indy cars should race at Daytona and stock cars shouldn’t race at Indy, but he was in the minority. Indy was hallowed ground to most of the drivers.

The test proved that the cars could run the 2.5-mile oval, but an actual Cup race was not a guarantee. The test made it seem more possible than ever before, and the timing was undeniably on NASCAR’s side as the sport was gaining popularity by the year in the ’90s.

When the 1994 race schedule was released, it included a brand-new 400-mile race at Indianapolis Motor Speedway.

The speedway had seats for a whopping quarter of a million fans, and every one of them was filled on Aug. 6, 1994, for the inaugural Brickyard 400. The speedway might have allowed the stock cars, but it was under the stipulation that the name and distance of the race were different from the May spectacle.

A whopping 86 Cup teams attempted to qualify for the 43-car field and a piece of its massive purse. Among the drivers to make the show was Indy legend AJ Foyt.

See also
2-Headed Monster: Are Post-Race Disqualifications a Punishment that Fits the Crime?

Ernie Irvan had the lead late in that first race, but a blown tire set up a fairytale ending for one young driver.

Indiana was Jeff Gordon’s adopted home, after his family relocated there in his early teens for better access to racing. Gordon had entered the Cup Series full-time in 1993 at just 21, an age which was extremely young for a Cup driver at that time. His first win came in one of those crown jewel races, the 1994 Coca-Cola 600, a race that at that time had produced very few first-time winners, all of them future champions.

Gordon celebrated his 23rd birthday just two days before the first Brickyard 400. He was coming off a 31st-place run at Talladega Superspeedway after an engine failure, so his third-place qualifying effort was a boost for the No. 24 team.

When Irvan’s tire came apart with four laps to go, Gordon took over the top spot, leading for the seventh time that day. With a clear track ahead and Brett Bodine in his rearview, Gordon held his position to the checkers, beating Bodine by just over half a second.

Gordon’s win was popular with the hometown crowd. It was just his second career victory, and Gordon hadn’t yet found the detractor for “winning too much,” which did and does translate into “beats my driver all the time.” He was a local kid who some fans had seen racing sprint cars at the local tracks.

Kissing the bricks wouldn’t become a tradition for another few years, but Gordon and his team celebrated a victory that would be a sign of things to come for the driver. He’d go on to win four Cup titles and a Winston Million bonus of his own. But that day, he was just that kid from Indiana.

The Brickyard 400 quickly became a jewel of its own, the race that every driver wanted to win after Daytona, perhaps wresting that honor from the Southern 500 for several years in the process due to the money and the track’s IndyCar history.

And it proved to be a worthy test of drivers. Winners of the 400-mile race read, for the most part, like a list of current and former Hall of Fame drivers. Gordon’s five Brickyard wins tops the all-time list. Jimmie Johnson is next with four, and then the list of drivers with two or three wins includes Kevin Harvick (3), Kyle Busch, Dale Jarrett and Tony Stewart (2). All of them are Cup champions, and while Harvick, Busch and Johnson aren’t Hall of Famers yet, it’s because they’re not yet eligible for enshrinement.

AJ Foyt isn’t the only driver to have attempted both races at the track; others include Stewart (who was an IndyCar champion before his Cup career), Johnson (who currently races full time in the NTT IndyCar Series), Robby Gordon, Kurt Busch, John Andretti, Patrick Carpentier, Sam Hornish Jr. and Juan Pablo Montoya.

Casey Mears has also attempted both races but failed to qualify for the 2001 Indianapolis 500.

The big oval hasn’t been kind to stock cars; the early fourth-generation cars put on some memorable races, but the track’s reputation in the Cup Series is more about the prestige of the track than the excitement of the races. The low point was the 2008 contest that featured six competition cautions (among 11 total) for tire problems. Cautions were thrown in an attempt to keep the tires from blowing out and sending drivers into the wall.

Johnson came out on top of a race that’s often lumped in with the restrictor-plate experiment at New Hampshire Motor Speedway as the worst races in recent memory.

But the Brickyard Mystique endures. The days of 86 entries and 250,000 fans may be in the past, but Indy remains as a mountain to conquer. If the Cup series returns to the oval at some point, drivers will again put an Indy win on their bucket list. And the best of them might get one.

Not racing on the most storied oval in history is a mistake.

I agree. I know that the racing wasn’t that great but it was OK once a year. It isn’t the only track on the schedule that didn’t produce great races.

I’ve watched all the Cup races at Indy, & haven’t seen a good race yet. One stood out as a wreck fest, but that doesn’t make it a good race for me.

The 400, is special because of the track, not the racing. I’m happy to see them running the road course, & expect this year to be the race it should have been last year. How fitting that it was won by AJ.

NASCAR has fixed Indy, now they & the Smith family needs to find a way to fix Texas.