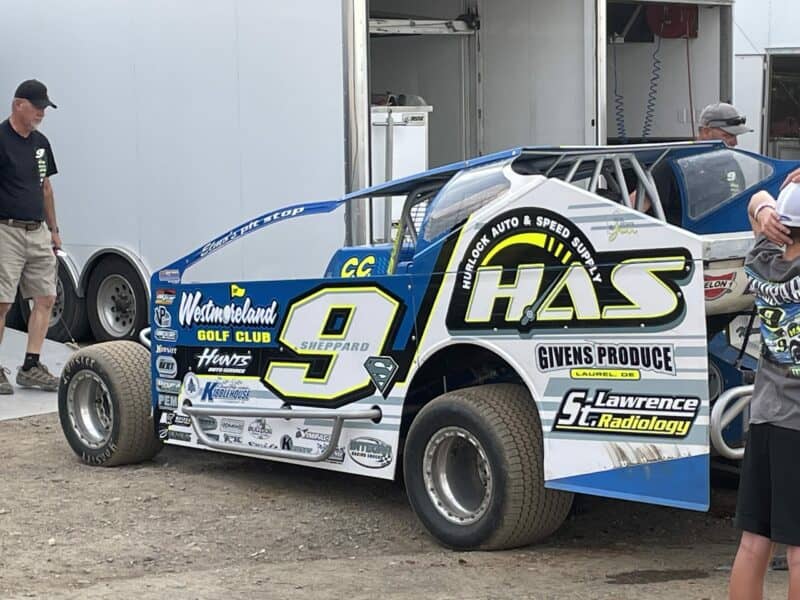 Matt Sheppard won the Battle of the Midway 73 in a rout at Orange County Fair Speedway, extending his hot streak in Super DIRTcar competition.

Matt Sheppard blew past Max McLaughlin on lap 14 and never looked back, obliterating the Super DIRTcar Series field to win the Battle of the Midway 73 Thursday night (July 28) at Orange County Fair Speedway. The win was Sheppard’s third on the DIRTcar circuit in 2022 and second in a row, dating back to a win at Big Diamond Speedway two weeks ago.

. @DIRTVision REPLAY: Matt Sheppard gets his Third Feature Win of 2022 in the 73 lap Battle of the Midway! pic.twitter.com/sUx6lxwE1Y

A 59-lap green-flag run to start Thursday’s feature ended with a caution for Brian Calabrese stopping on track, a yellow that seemed primed to introduce some drama to the event, with Anthony Perrego showing pace after a pitched battle with McLaughlin put him in the runner-up position. On the lap 60 restart as well as a second restart on lap 67, though, Sheppard ran away and was never challenged by Perrego.

I wasn’t at Orange County this Thursday night, but I was present to see Sheppard’s win at Big Diamond two weeks ago, and just like that race, Sheppard proved absolutely untouchable once he got out front and was dictating the pace of the race. For Sheppard to pull away from both Perrego and McLaughlin while dicing through lapped traffic spoke volumes to just how strong his No. 9 car was. The best car won.

It was disappointing that Perrego couldn’t actually challenge Sheppard for the race win, but the mid-race battle between he and McLaughlin for second and third was excellent stuff.

Current Lucas Oil Late Model Dirt Series points leader Tim McCreadie returned to his modified ranks while that tour is on an off weekend and put on a show, winning the second heat race and scoring a top-10 finish in the feature.

Best part of Big Block racing is probably the lack of travel and sleeping in your own bed every night. https://t.co/T2pmr1IWrf

“Money” Mat Williamson came into Orange County second in Super DIRTcar points, but seemed to lament the Battle of the Midway 73 feature before it even started, expressing frustration in a DirtVision interview that his team’s night was setback by drawing a tough group for time trials and his heat race. Finishing a distant 14th when the points leader (Sheppard) and current third-place driver (Perrego) scored a 1-2 result did damage to his title chase.

NASCAR Camping World Truck Series regular Stewart Friesen was unofficially Thursday night’s hard charger in the Battle of the Midway 73, improving from 13th to fourth in the final running order but never challenging for the race win.

I get jealous when I see fair races like the Battle of the Midway 73. It makes the local fairs’ junk car figure-8 races pale in comparison.

Thursday night’s race on a 0.625-mile oval proved plenty racy without destroying racecars, and the 73-lap distance did not result in a rash of late-race tire failures. Maybe the solution to West Virginia Motor Speedway’s woes would be to bring the Yankee modifieds down to Appalachia a time or two? Let’s not forget that one year ago these center-drive mods were the one type of car that actually made the Bristol Motor Speedway dirt track seem racy.

I’m not a fan of the redraw at any World Racing Group event, both from a perspective that it’s a gimmicky way to set a starting lineup and that it basically serves as an unnecessarily long intermission in a race program. So I didn’t bat an eye when it was announced that DIRTcar opted to skip the redraw Thursday night to keep the program moving. What I don’t understand is why it skipped the redraw … only to still go through with parking the entire starting lineup on the frontstretch and announcing them one by one.

You’ll never hear me speak ill of the skill and guts it takes to be a racecar driver at any level. But I can also acknowledge that DirtVision reporting that Alex Yankowski was eating cheese fries by his car roughly 20 minutes before a 73-lap feature makes it a bit more challenging to fend off commentary about racecar drivers as sportsmen, athletes, whatever.

There were numerous accounts complaining on social media Thursday night that DirtVision was cutting back to the race leader during heat races despite their leads being safe while battles for transfer positions raged. I can’t fault fans for being upset about that. I can and will, however, question fans who were advocating for a “22-man” camera shot to be utilized for dirt race streaming as a viewing option.

if @FloRacing set up an extra camera that just stayed static all night with a view like this, and offered an alternate feed that we could choose to watch, that would be 👌 pic.twitter.com/H6QsMmT8Yg

I like the idea of having a wide-view camera running at all times to ensure that no incidents go uncaptured during a race. But there’s no way in hell I’m going to advocate for dirt streaming services that I pay to view to make the equivalent of a Facebook Live stream on a cellphone a static viewing option.

2 – caution flags that slowed Thursday’s Battle of the Midway 73 feature.

45 – big-block modifieds entered in the Battle of the Midway 73 Thursday night.

Where it Rated (on a scale of one to six cans with one a stinker and a six-pack an instant classic): We’ll give the Battle of the Midway 73 four fairly priced Budweisers. A 59-lap green-flag run is always welcome in 2022 and the mid-race battle between Perrego and McLaughlin was riveting. Sheppard’s dominance up front and a lag in the racing program after the last-chance event keep the event from scoring higher.

Up Next: Thinkin’ Dirty head back to the World of Outlaws ranks this coming weekend, with the annual Prairie Dirt Classic going off for $50,000 to win at Fairbury American Legion Speedway in Illinois. Coverage can be found on DirtVision.