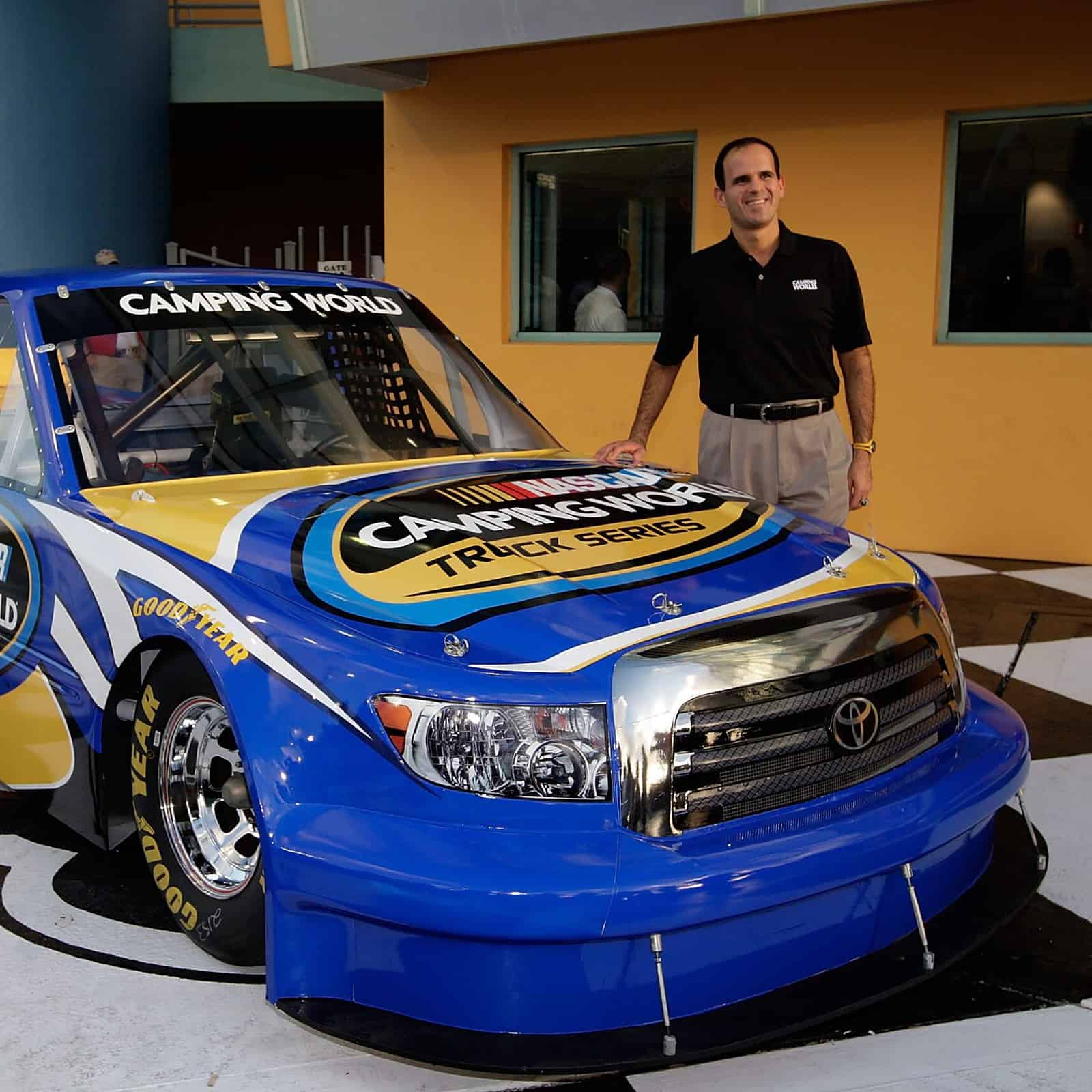 Camping World, which has served as title sponsor for the NASCAR Camping World Truck Series since 2009, will end its tenure at the end of this season.

Camping World CEO Marcus Lemonis announced Wednesday (July 27) via Twitter that the company will not return to sponsor the series in 2023.

What a ride it’s been! Thank you @NASCAR pic.twitter.com/yLZjJN6OXr

Not long after the announcement, Lemonis appeared on SiriusXM NASCAR Radio.

“You got to make tough calls, and we’re in an environment and economy that I think is going to be perfectly fine because we’re resilient people. My people matter to me more than a sticker on a car or a name on television. It’s just at the end of the day, I’m watching people struggle.”

While it does come as a bit of surprise since Camping World has served as title sponsor for such a long time, it shouldn’t be considered completely out of the blue. Lemonis dropped a cryptic tweet earlier this season in response to Mars, Incorporated’s “swan song” as title sponsor for the Pocono Raceway NASCAR Cup Series event ahead of its exit from NASCAR at the end of the season.

“Lots of change happening and I’m sure more coming,” the tweet read.

Granted, there was no indication at the time that Camping World was on its way out, but it should have at least raised a few eyebrows since the company’s current contract only runs through the end of this season. Add in Camping World’s expansion to other series, including NHRA and the Camping World SRX Series, and the writing was on the wall.

Enter Camping World. The company signed on for a seven-year partnership as title sponsor for the series and the Camping World Truck Series was born.

“Camping World has a strong affinity with NASCAR fans, and we’re thrilled to be the primary sponsor in NASCAR’s Truck Series,” Camping World chairman and CEO Marcus Lemonis said at the time. “With the state of the current economy, Camping World’s main objective is to communicate our brand in the most cost-effective manner and to promote affordable, family fun.

“Additionally, we feel strongly that this sponsorship will dramatically increase our customer base in experiencing our entire product offering. We expect this relationship to not only benefit the teams and fans, but we will put a special emphasis on supporting the four auto manufacturers in selling more trucks and the Truck Series sponsors to yield the same return on investment that we’ve enjoyed. Camping World will work diligently to promote the four manufacturers and team sponsors by positioning them as preferred product providers to the four million RV enthusiasts we currently serve.”

Clearly, the company appreciated its involvement in the Truck Series as an extension through the 2022 season was announced

For the 2019 and 2020 seasons, the series changed its branding slightly and went by the Gander RV & Outdoors moniker, one of Camping World’s subsidiaries, before returning to the Camping World name in 2021.

Just seven races remain before Camping World leaves the series. And for the first time since late 2007, the question remains what company might end up serving as the new title sponsor. Although, interestingly enough, it appears we might come full circle and have Craftsman step in once again.

.@NASCAR has known for some time that @CampingWorld was not renewing, and it's well down the line with a potential replacement, per sources.

🔲 The leading candidate is believed to be @Craftsman. pic.twitter.com/HwxonLsexg

But regardless of what company replaces Camping World, there’s no denying the legacy Camping World and Lemonis leave behind.

First and foremost, it’s a change that the Truck Series hasn’t seen in 14 years, and it was a partnership that lasted longer than Craftsman’s tenure. By comparison, the Cup Series went through two title sponsors in Sprint and Monster Energy before moving to its current tiered sponsorship model in 2020.

More importantly, Lemonis didn’t just sign a contract and a check. Instead he became fully involved in the series.

Entering the 2021 season, Lemonis announced a series of bonuses set to go to teams at specified points throughout the season.

The first prize was a pair of $25,000 checks that went to Ben Rhodes, who won the season opener at Daytona International Speedway and his road crew. Later in the season, John Hunter Nemechek‘s road crew snagged a combined $125,000 for leading the point standings after races at Kansas Speedway and Knoxville Raceway.

Finally, once the season ended, Sheldon Creed and his road crew received $50,000 and $25,000, respectively, as a bonus for Creed leading the most laps during the year.

Not long after that announcement, Lemonis was at it once again.

It’s no secret that team sponsorship has plagued the Truck Series across the board for years, but when 2020 champion Creed finished runner-up in a plain white truck in February 2021 on the Daytona International Speedway road course, Lemonis became much more vocal about the problem sitting in plain sight.

Let me make this simple for all of us @NASCAR teams.. we need to work together on the B to B side to create commerce and sponsorship… I’m willing to help each of you but can’t tolerate week after week unsponsored competitive drivers.. lean on me .. the fans will support them pic.twitter.com/gDoB73A3xJ

Barely two weeks later, Grant Enfinger, who was relegated by a lack of sponsorship to a part-time schedule with ThorSport Racing, was set to race a truck outfitted in the familiar, primarily blue and yellow, Camping World colors.

Of course, when you give an inch, people want a mile. Twitter blew up with people suggesting a variety of teams that could benefit from a Camping World sponsorship, so guess what happened?

That’s right. The offer was presented and several teams took advantage of it. Of course, when you’re struggling with funding, why wouldn’t you go ahead for a guaranteed $15,000 at a bare minimum? Never mind the potential bonuses for finishing well.

By the time the race at Las Vegas Motor Speedway rolled around, 10 low-funded teams adorned the Camping World colors. Just two of those drivers took advantage of the additional bonus, though. Enfinger and Parker Kligerman both finished inside the top 10 and took home an additional $10,000.

This season, Lemonis was the driving force for Todd Bodine to run six more races in a quest to have 800 career NASCAR starts, a partnership that began with a Twitter challenge issued to fans. The task? Present 800 reasons why the Camping World CEO should sponsor Bodine for six races in 2022 to help him reach that milestone.

The fans sure answered with “over 17,000” reasons according to Todd’s wife, Janet Bodine.

After being away from the Truck Series since 2013, Bodine’s results were about what you’d expect for a driver who’s been out of the truck for nearly 10 years. He returned at Las Vegas Motor Speedway in a partnership with Halmar Friesen Racing, which fielded the trucks for all six starts.

That first race back was tough and Bodine ended up bringing out two cautions en route to a 21st-place finish. Five races later, he was back behind the wheel at Darlington Raceway, this time posting a 10th-place finish (despite an early spin) that put a near-permanent smile on his face.

After that, Bodine has posted results of 13th at Texas Motor Speedway, 20th at Sonoma Raceway and 27th at Nashville Superspeedway. He made his final start this season and perhaps for his career last weekend at Pocono. Unfortunately, he was collected in a wreck just 12 laps into the race and ended up 36th in the final running order. His career now spans 241 NASCAR Cup Series, 333 Xfinity Series and 226 Truck Series races. At this time, there are no plans for him to enter another race in the future.

Todd Bodine will make his 800th career NASCAR national series start Saturday at Pocono. Will there be an 801st start? His response: pic.twitter.com/7f7twZfIzD

Of course, we can’t forget about the 2020 Kyle Busch Bounty. A series of tweets following Busch’s seventh straight Truck Series win, dating back to 2018 led Kevin Harvick to put up $50,000 to any Cup Series driver who could race in the Truck Series and beat Busch at his own game.

But that wasn’t enough as Lemonis stepped in to sweeten the pot and doubled the prize to $100,000. And if Busch emerged victorious? It really was set to be a win-win as the money would go to Samantha and Kyle Busch’s charity, The Bundle of Joy Foundation.

Before anyone even had a chance to take on the challenge, the COVID-19 pandemic put a stop to NASCAR for more than two months before racing picked up once again.

In the first Truck Series race when the season restarted, Chase Elliott bested Busch and took home the bonus. In a “spur of the moment thing,” Elliott joined in by imitating Busch’s trademark celebratory bow.

“It was not a dig at anybody, just having fun with it. It was about beating him, so why not have some fun with it.”

At a time when the Truck Series needed a title sponsor to replace the departing Craftsman, it was Camping World that stepped in. I don’t think anyone really knew what they were in for once Lemonis got involved. But one thing is for sure. The overly vocal and sometimes downright blunt CEO has made his mark on the series and his impact will still be felt for many years to come.

Made the most out of race with no practice or qualifying. Nice job on behalf of @tate_fogleman to start last and drive to a top-20. @mattdracing says it’s business as usual for 2023 with a team he calls “family”. More from the team soon. @RackleyRoofing | @WAR_Shocks | pic.twitter.com/Hogv8alvQ8

Regardless of who comes on as title sponsor, they will never approach what Camping World has done for the series. My hat is off to them, well done Sir.