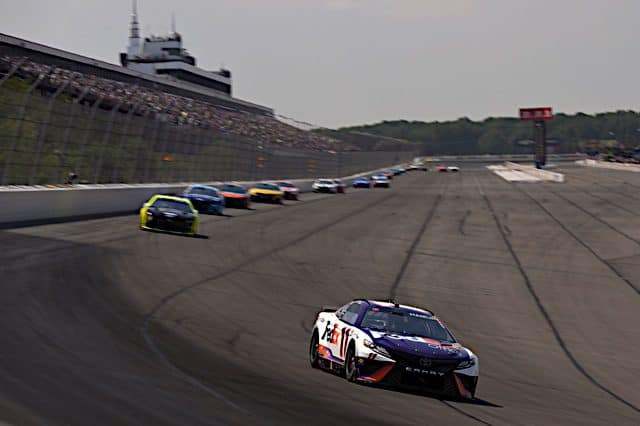 How will Ty Gibbs do in his second NASCAR Cup Series start, and is he making a case for Cup in 2023?

Ty Gibbs got the call to replace Kurt Busch in the No. 45 car after he was not cleared to race at Pocono Raceway last weekend, and the youngster will be filling in again this Sunday (July 31) at Indianapolis Motor Speedway’s road course.

Gibbs’s debut got off to a rocky start, as he started in the back and was running around 30th place for much of the day. However, he kept his car clean and made steady gains throughout the second half of the race. By the time the checkered flag fell, he finished a solid 16th place in his Cup debut.

For a driver with the amount of hype that Gibbs has, he had a lot to live up to, as he was a heavy betting favorite to at least score a top-10 finish. But even though he wasn’t able to clear that hurdle, that shouldn’t be much of a concern.

The drop of the green flag was Gibbs’ first time in the Next Gen car, as he was only able to practice on simulators the night before. The most important results of his debut are that he got better as the race went on and didn’t make any mistakes. With practice and qualifying this weekend at Indianapolis, Gibbs will eclipse his debut performance at Pocono.

However, Gibbs would be best suited to remain in the Xfinity Series for another year. But if he has a top-five run this weekend or wins the NASCAR Xfinity Series championship at Phoenix Raceway in November, the question of him moving to Cup should be brought up again.

Was Denny Hamlin right to retaliate against Ross Chasten the way he did at Pocono?

Everyone saw it coming from a mile away, and Denny Hamlin finally set the story straight with Ross Chastain at Pocono last weekend. While racing for the lead on a restart with 18 laps to go, Hamlin drove up the track and left Chastain with little room in the top lane through turn 1.

Chastain then hit the wall after running out of room and ricocheted into the path of Kevin Harvick before coming to rest at the inside wall.

Even though Chastain knew that retaliation was headed his way, Hamlin could have handled the payback better than he did. Pocono is one of the longest and fastest tracks, and Hamlin extracted his payback on a restart with the entire field behind him. Chastain’s crash had the potential to collect more than half the field when he turned back into traffic, as an onslaught of drivers had to dodge and quickly speed around his spinning car. Given how bunched up the field was, it was fortunate that only one other driver was collected in the melee.

Chastain vs. Hamlin appears to be over for now. But by getting back at Chastain, Hamlin now has Harvick angry at him.

Harvick was running in the top five and in a must-win situation at Pocono, and he was left with a 17th-place finish after the crash. And given the disqualifications, last weekend was one of Harvick’s prime opportunities to punch his ticket to the postseason.

If Harvick misses the playoffs or has another run-in with Hamlin, last week’s crash won’t sit well with Harvick and the No. 4 team. And as we saw in last year’s playoffs, Harvick is not a driver out of which to make an enemy.

The NASCAR Camping World Truck Series heads to Lucas Oil Indianapolis Raceway Park for its playoff opener. Who are the favorites to win?

Lucas Oil Indianapolis Raceway Park was a staple of the Truck Series from its inception until a long hiatus that began in 2012. The 0.686-mile short track is now back after more than a decade.

With many drivers running on the track for the first time ever, Friday night’s (July 29) race will be as unpredictable as ever.

As is the case almost every week, the series’ top talents in Zane Smith, Chandler Smith and John Hunter Nemechek among others will be contenders to win and run well.

However, several drivers have had success at IRP in other divisions of racing as well. The ARCA Menards Series raced at the track throughout most of the 2010s, and two current Truck drivers won races there: Christian Eckes in 2018 and Chandler Smith in 2019 and 2020.

In terms of drivers with Truck starts at IRP, Matt Crafton and Johnny Sauter are the only two that were present for IRP’s most recent truck race in 2011. Crafton had a best finish of third at the track in 2010, while Sauter led 139 laps and finished second at the track all the way back in 2004.

With their previous experience and success at the track, look for these drivers to make some noise at the front of the field Friday night.

With Pocono finding success with one race, how many tracks should have two dates on the Cup schedule?

The trend has now followed Pocono Raceway. 2022 marked the first year that Pocono had one date since 1981, and the track reportedly had its largest attendance since 2010.

Healthy attendance is important for the perception and financial stability of tracks, so one date may be the way to go for the foreseeable future. In addition, the removal of second dates allows the introduction of brand-new tracks onto the schedule. That in turn leads to new sets of fans attending races and following the sport.

Daytona, Talladega and Martinsville should be absolute locks to have two dates. And although Bristol Motor Speedway has one date on dirt and one date on concrete, the racing is good enough at the track to have two dates — the question instead turns to finding a home for the former spring race that was so frequently rained out.

Beyond those four, NASCAR should be open to entering new markets and racing at new tracks. But if other tracks are to have two dates, the best course of action is to make them different in some shape or fashion.

At Daytona, Atlanta and Darlington, one race is 500 miles while the other is 400 miles. Likewise, tracks like Vegas and Kansas would benefit from a 500-400 dichotomy, or even a 400-350 one. To make the championship race at Phoenix more prestigious, a return to 600 kms. instead of the current 500-km. distance would add to the finale.

The two dates can also be run at different times of the day. If one race is during the afternoon, make the second race at night, especially if one of the races is run during the hot summer months.

Chastain won’t cut Hamlin any slack either. Hamlin kept it up with Joey too, until Joey broke Hamlin’s leg. lol

You totally forgot about Charlotte having 2 dates. At least 1 is on the oval and 1 is on the roval. Kansas doesn’t deserve 2. Same with Phoenix, Atlanta and Richmond as they currently run. Texas and COTA should be scrapped entirely. Spread those doubles to other tracks that are currently being shut out. Go back to Chicagoland and forget the street fiasco using a Kansas date and restore the Road America date.

Don’t use dirt on Bristol and give a Texas date to a real dirt track.

Nobody complained about the tracks, or distances, until the new improved versions of the cars entered the picture, which they are still playing with.