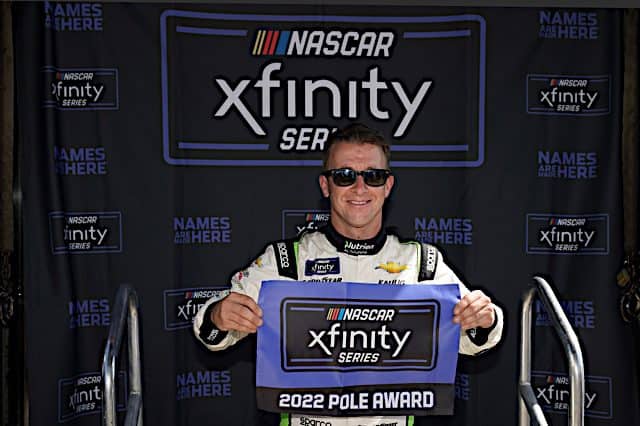 It looked as though Riley Herbst would upset road course-savvy veterans for the NASCAR Xfinity Series pole at the Indianapolis Motor Speedway road course, but AJ Allmendinger had other plans as he snagged the pole with seconds remaining in qualifying for the Pennzoil 150.

Allmendinger locked up the top spot in his No. 16 Kaulig Racing Chevrolet with a speed of 97.834 mph.

The pole is Allmendinger’s third of the season and sixth of his career, as well as his first on a road course this season.

Ty Gibbs catapulted with a few seconds remaining to join Allmendinger on the front row. Herbst will start from the third position, with NASCAR Cup Series driver Alex Bowman alongside him in fourth.

Sam Mayer will launch from fifth, while Chase Briscoe will start sixth at his home track.

A pair of JR Motorsports drivers set the fourth row, with Noah Gragson qualifying in seventh and Josh Berry in eighth.

Austin Hill and Justin Allgaier rounded out the top 10.

The No. 13 of Brad Perez, the No. 66 of JJ Yeley, the No. 78 of Josh Williams and the No. 90 of Mason Filippi failed to qualify for the race. Parker Kilgerman suffered a power steering issue on his No. 35 Chevrolet and was unable to make a qualifying lap. However, he is locked into the race on owner points.