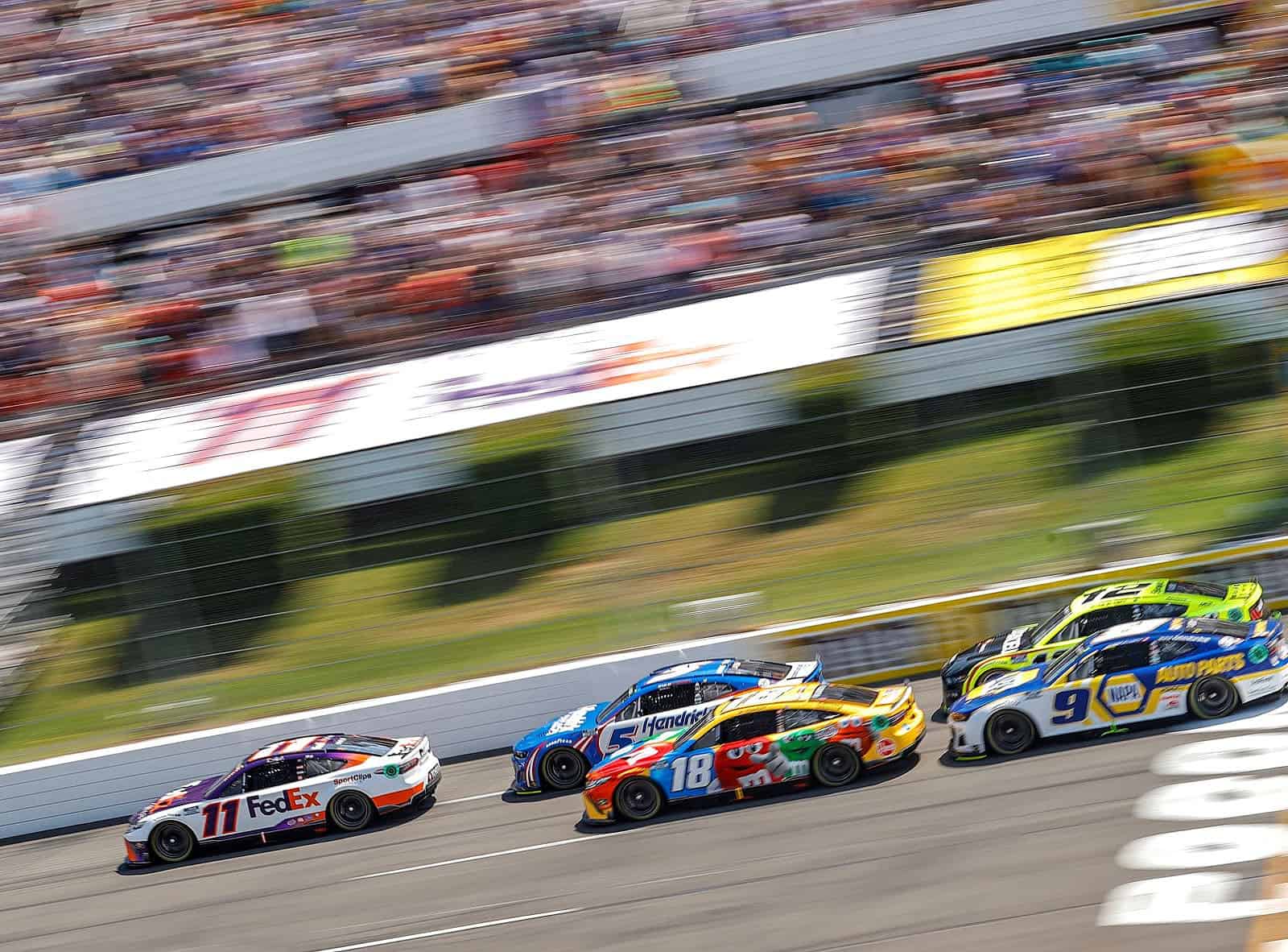 SPEEDWAY, Ind. – While racing for the NASCAR Cup Series pole at Pocono Raceway last weekend, Kurt Busch lost control and had a hard rear-end crash into the outside wall. Busch was not medically cleared to race the following day at Pocono due to a concussion, and Ty Gibbs was a last-minute substitution in the No. 45 car.

But after having a week to recover, Busch was ruled out for tomorrow’s (July 31) Verizon 200 at the Brickyard as well.

During Saturday’s Cup media bullpen at Indianapolis Motor Speedway on Saturday, July 30, drivers voiced well wishes to Busch while detailing their own experiences and questions about the new car.

Joey Logano stated that NASCAR should look into the safety for the new car, but he first praised the Next Gen’s role in flips and the structure of the roll cage.

“I think we need to take a serious look into [the car],” Logano said. “It would be dumb if we don’t with what’s going on. In my mind, the car is no doubt safer for intrusion. The [Ryan] Newman crash, my wreck at Talladega [Superspeedway, last April], roll cage crush-type things. Good for that.”

Despite the Next Gen’s ability in protecting a driver in the most terrifying crashes, Logano said that the more commonplace accidents hurt more than they used to with the new car.

“For 99% of the crashes where you used to just get out and be OK, it hurts now,” he said. “I went through a few of them this year and we’ve wrecked more stuff this year than we ever have and we’re in a car that’s different than ever. It hurts. I hate it for Kurt; he’s going through what he’s going through, and it’s awful. And I’m glad he’s doing the right things to make sure he’s healthy and recovers correctly.

“Every single driver gets out and says that it hurts more, I’m pretty sure. I don’t care what the numbers say after that because there’s a pretty good data recorder inside there that’s holding onto the steering wheel.”

Kyle Larson echoed some of the same concerns, and he also noted that rear-end impacts appear to hurt more than front-end crashes.

“Yeah, [I’ve noticed a difference] with the rear end,” Larson said. “I’ve crashed this year, but it’s been all frontal stuff and it feels comparable to last year’s stuff. I did spin out at Darlington [Raceway] at a test and backed into the wall and it was way harder than it was before. That’s kind of how he hit, so yeah, I mean, that’s concerning, but I think everybody’s raised those kinds of concerns to NASCAR. But I think they’re so far along that I don’t know what they could do to soften up the car.”

As a driver with just a handful of starts in the Gen 6 car before its retirement, Austin Cindric said that he too noticed differences in crashes between the two cars and that NASCAR should continue to explore ways to learn from crashes with the Next Gen car.

“But at the same time, there’s certainly some things we can learn from that, and hopefully we can continue to improve.”

With recent concerns, a few drivers in the field have begun using mouth guard accelerometers, which are inserted into a driver’s mouth during a race and measure the impacts a driver endures in the event of a crash. Chris Buescher isn’t using the device himself, but he noted that multiple drivers are.

“I think there’s a good handful that are are, and it’s all about data collection and make sure we can learn right,” Buescher said. “And obviously with Kurt being out right now, we’re all sitting here wishing him the best and a fast recovery, but also trying to understand why that impact got him there in the first place. And I think that is a good step in the direction of figuring out what it is.”

The Cup Series will compete at the Indianapolis Motor Speedway road course this weekend, and the series will head to Michigan International Speedway the week after. With the 2-mile configuration of the track, next Sunday’s (Aug. 7) race will see high speeds and some of the same risks that led to Busch’s crash in Pocono qualifying.

I don’t know why they aren’t already logging that data from every car in the field. The ECU is perfectly capable of collecting and logging this info along with the hundred other parameters it monitors. It would literally require adding a sensor, a C++ library and a few lines of code.

Heck I’m no electronic engineer and I could throw something together with an Arduino and a couple modules in an afternoon. NASCAR is 100x better than they used to be but a bit of that “Daddy has spoken, the subject is closed” attitude remains.

If it’s too dangerous for you fellows there are many that would happily take your places . Primo Donna Racing since Nanny NASCAR stopped racing to the yellow or in the pits.