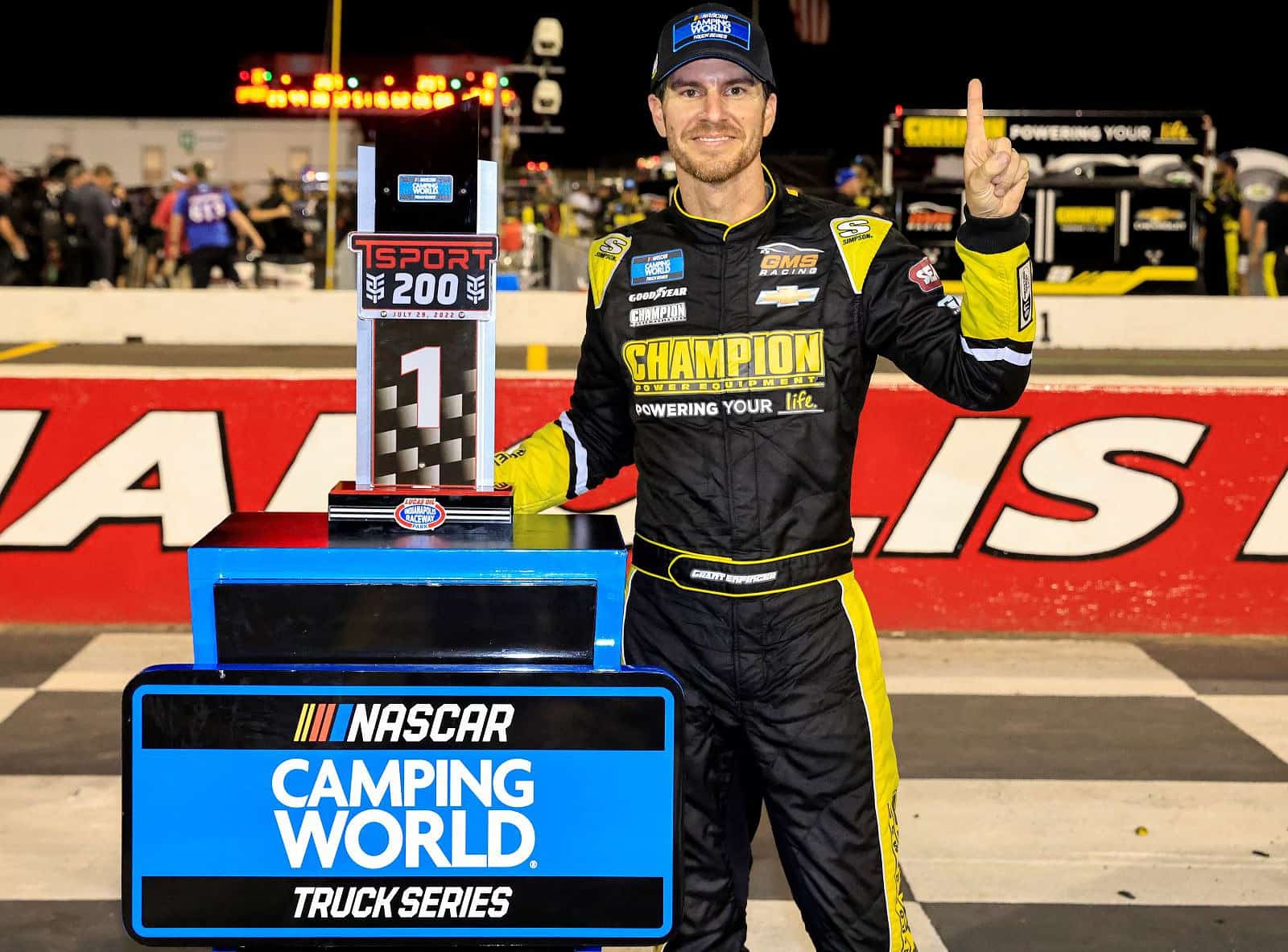 CLERMONT, Ind. – It had been a frustrating season for Grant Enfinger, but all the waiting paid off and more, as he scored his seventh career NASCAR Camping World Truck Series win at Lucas Oil Indianapolis Raceway Park on Friday night (July 29) in overtime.

Enfinger led just 13 laps all night, but he had an average running position of third and was mixing it up with the leaders throughout the entire race. After taking the lead with 12 laps to go, Enfinger lost the lead after pitting for tires on a late caution with seven laps to go. But he quickly made his way up to fourth on the ensuing restart, and another restart gave him the opportunity to sneak by the rest of the field to win the first Truck race at IRP since 2011.

John Hunter Nemechek won the pole in qualifying, and teammate Chandler Smith qualified right beside him in second. They ran just that way at the drop of the green flag, as Nemechek was out front for the first 64 circuits. The duo ran 1-2 for the entire first stage, but the stage one caution saw Smith take the lead on pit road. On the ensuing restart, it was Carson Hocevar who got the jump on Smith, and he took over the top spot on lap 71.

Hocevar vs. Enfinger at Halfway

The middle of the race saw an incredible battle between Enfinger and Hocevar for the lead. After a restart on lap 81, Enfinger got to the back bumper of Hocevar and ran side-by-side and nose-to-tail with him for more than 20 laps. Enfinger’s hard work finally paid off 25 laps later on lap 105, as he finally got clear of Hocevar and took control of the race.

Shortly after the battle between Enfinger and Hocevar, a caution came out that led to split strategy on pit road. Ty Majeski took two tires and restarted in the top five, and he took the lead from Chandler Smith on track on lap 117 en route to a stage two victory. Majeski stayed out under the stage two caution, and he controlled the final third of the race. Unfortunately for him, he developed a flat tire within the final 15 laps, and he was passed for the lead by Enfinger on lap 189. He was saved by a caution a few laps later, but a surefire win turned into an eighth-place finish after mixed pit strategy and an overtime restart.

Tempers Flare at the Finish

It’s safe to say that several drivers won’t be sending Christmas cards to each other. While racing for a top-10 position on lap 191, Colby Howard gave Hocevar a bump out of turn 4. Hocevar then responded by hooking him in the right rear on the frontstretch, and one of Howard’s best Truck Series performances came to a premature end.

During the caution, there was split pit strategy. Enfinger and Majeski pitted for tires, while Nemechek stayed out and inherited the lead with Taylor Gray right behind him. On the lap 199 restart, Gray had a textbook restart and got the jump on Nemechek heading into the first two turns. But in turn 4 coming to the white flag, Nemechek washed up the track and spun Gray out. For Gray, a chance at his first Truck win ended in a 22nd-place finish.

With Zane Smith and Nemechek lined up on the front row for the final restart, Smith responded by walling Nemechek heading into turn 1. Nemechek dropped to 10th at the end of the race, while Smith took the lead on the backstretch with two laps remaining. But Smith’s old tires were no match for Enfinger’s fresh rubber, and Enfinger made quick work of him on the final lap to score his first win of the season.

The Win(s) That Could’ve Been

Majeski was cruising in the final stage, at one point building up a two-second lead over Enfinger. The 71 laps he led Friday night was a career high, and he looked poised to score his first career win. But after a flat tire and lost track position on pit road, a prime winning opportunity slipped away. He was able to come back and finish eighth, but he will now have to put in all together again and focus on advancing to the second round of the playoffs.

For Taylor Gray, the ending to his race was far more heart breaking. Gray appeared to be clear of all traffic heading into the white flag, and a surefire win slipped away after the contact with Nemechek. The team was understandably upset after the contact, as Nemechek and the David Gilliland Racing team exchanged heated words with each other on pit road after the race. Gray will have more opportunities to compete for wins in the future, but for him and DGR, this race will be one that got away.

By virtue of his win, Enfinger punched his ticket to the second round of the playoffs. The cutoff race will be held at Kansas Speedway on Sept. 9, and the lowest two drivers in points will be eliminated. Behind Enfinger, Zane Smith (+50), Ben Rhodes (+36), Stewart Friesen (+28), Nemechek (+24), Chandler Smith (+24), Majeski (+19) and Hocevar (+7) are above the cutline, while Matt Crafton (-7) and Christian Eckes (-7) find themselves on the outside looking in.

Corey Heim may have been the highest finishing rookie in fifth, but it was Layne Riggs who stole the show at the end of the night, as the 20-year-old finished seventh in his Truck  debut for Halmar Friesen Racing.

The Truck Series is off next weekend before returning to Richmond Raceway the following weekend. The Worldwide Express 250 for Carrier Appreciation will take place on Saturday, June 24 at 8 p.m. ET, with TV coverage provided by FOX Sports 1.