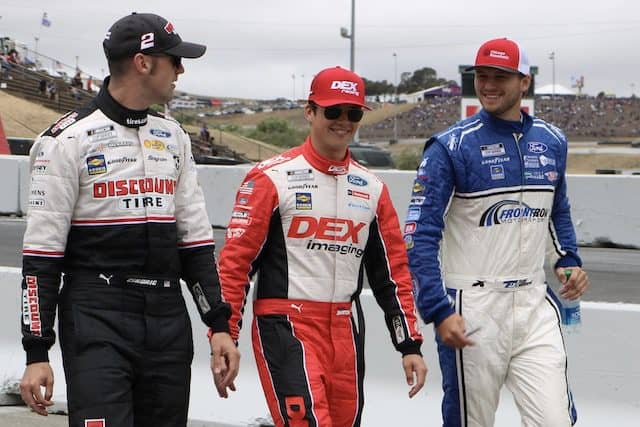 SPEEDWAY, Ind. – The NASCAR Cup Series is a tough business to make it in, and 2022 Cup rookies Harrison Burton and Todd Gilliland have endured a fair share of struggles in their first full-time seasons.

Through the first 21 races, Gilliland had a best finish of 15th at Darlington Raceway in May. For Burton, his best result was a 10th at Atlanta Motor Speedway in July. Both drivers were well outside the top 25 in points heading into the 22nd race of the season at the Indianapolis Motor Speedway road course.

But after a chaotic overtime finish at Indy saw drivers cut corners and spin out on restarts, the seas parted for Burton and Gilliland to finish third and fourth, respectively, earning career-best performances. And with those results, they became the first drivers born in the 2000s to score a top-five finish in a Cup Series event.

Burton began the day by qualifying 13th, his third-best start of the season. He fell back and only spent 23 of the 86 laps inside the top 15, but he made his way toward the front when it counted the most and made all the right moves in the final laps of the afternoon.

“It’s a good momentum builder for us,” Burton said. “Had a rough day going and then kind of dug deep and got something out of it. That’s what it’s all about, what our team’s all about, and really proud of that.”

Burton and Gilliland have been racing against each other for years in NASCAR’s lower divisions, and the pair’s finishes were not lost on Burton.

“I can’t get away from [Gilliland],” Burton joked. “We either finish 25th or third and fourth together. It’s been that way since we were ARCA racing.”

For Gilliland, he turned heads on Saturday (July 30) morning by qualifying ninth, the best effort of his career. Gilliland showed throughout Sunday afternoon that the top-10 starting spot was no fluke, as he spent more than half of the race in the top 15 and had an average running position of 14th throughout the 86-lap event. It was the most complete race of his Cup career, and it ended with his best-ever result.

“That’s really our best weekend, start to finish by far, so hopefully that’s just something to build on,” Gilliland said. “For me, that’s a lot of confidence. Road course racing is tough, too. I’ve always loved it, but it hasn’t really loved me so much this year, especially the first time here at Indianapolis. That’s really cool.”

The duo’s strong finishes didn’t come without some good fortune. Christopher Bell brought out the caution with five laps to go, and that set the field for a three-lap shootout. With just three laps to decide a win at the Brickyard, the lap 80 restart saw Chase Elliott, Austin Dillon and others spin out after the field went five-wide into turn 1.

Gilliland and Burton found themselves in eighth and ninth, respectively, by the time the caution flew for Dillon’s immobilized car. The race was then sent into overtime, and the duo was now poised for career-best results. All they had to do was navigate the final two laps.

When the green flag waved for lap 85, Gilliland and Burton were immediately able to capitalize. Ryan Blaney and AJ Allmendinger restarted inside the top five, but the two made contact in turns 1 and 2, with Blaney spinning in front of the field.

Burton and Gilliland were quickly able to navigate the calamity to find themselves running fourth and fifth. Ross Chastain emerged in second, duking it out with eventual race winner Tyler Reddick for the lead, but he was later penalized for shortcutting turn 1 on the initial restart. With Chastain removed from contention, Burton and Gilliland now found themselves running third and fourth.

The field cleanly made it to the white flag, and the duo held off Bubba Wallace, Joey Logano and Allmendinger to retain their top-four finishes as the race concluded.

Behind a dominant Reddick, it was Austin Cindric who finished runner-up for his best result in the Cup Series on a road course. With Cindric, Burton and Gilliland finishing 2-3-4, it marked the first time since 1994 that three Cup rookies finished in the top five in the same race.

Burton and Gilliland’s performances were not lost on Cindric after the race, as he uploaded a photo of the trio posing in front of the IMS pagoda while celebrating their results.

The Cup Series now heads to the Irish Hills of Michigan International Speedway on Aug. 7 for the 23rd race of the 2022 season. Gilliland and Burton will be riding high from their career-best days at the Brickyard and will look the carry their momentum forward for the rest of the 2022 season.

I was amazed & pleased to see these teams navigate the minefield to get the finishes they did.
It’s not like they had to dodge a bullet to do it, they had to dodge one, on every pit stop & restart. Well done, they & their teams have every right to be proud.