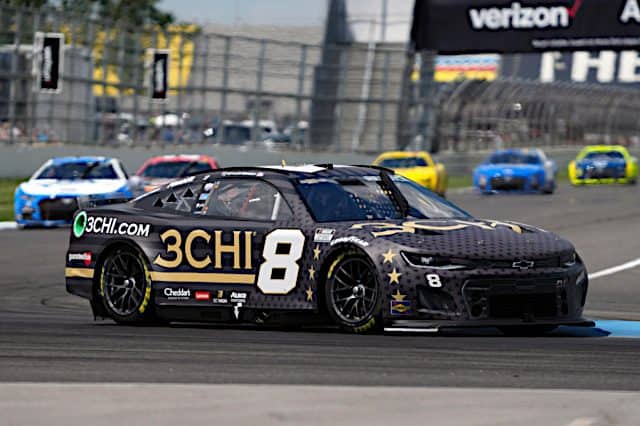 Entering 2022, Tyler Reddick had never won a NASCAR Cup Series race. This Sunday (July 31), at the end of the Verizon 200 at the Brickyard on the Indianapolis Motor Speedway road course, the Richard Childress Racing driver can kiss the bricks as a two-time winner in 2022.

Reddick took the lead for the final time with 33 laps to go, wheeling around the outside of Christopher Bell‘s No. 20 in the final chicane, but it wasn’t exactly a Sunday cruise from there. Through restart after restart, Reddick had to defend from the Cup Series’ best, fending off Ryan Blaney, Chase Elliott and Ross Chastain one by one as they challenged for the top spot, then came up short.

In one last overtime restart, Reddick got the jump on the field, but Chastain muscled past him on the backstretch after cutting the access road in turn 1. Rather than waiting for NASCAR to hand down a verdict on the No. 1, Reddick passed him back in turn 12 before taking the white flag and setting off for the checkered.

See how @TylerReddick scored the win at @IMS in overtime!

Here's a look at the final restart at Indy. #NASCAR pic.twitter.com/Yo43SqrrzP

“I couldn’t believe [Chastain] got ahead of me,” Reddick told NBC from the famous bricks of the start/finish line, “I was kind of waiting to see if he was going to have a penalty … Hats off to Ross [Chastain] for trying to do that, but really glad it didn’t end up working out because I’d have been pretty pissed off … just really glad to be able to do it here in Indianapolis. This is one really special place to race, and really excited to kiss the bricks here in a little bit.”

The first stage was calm out front, as Reddick and Cindric pulled out a comfortable lead over the field, before both came to pit road with two laps remaining in the stage, leaving hometown boy Chase Briscoe on track to claim his third stage win of the season.

Back in the pack, the first 15 laps were anything but calm. Turn 1 was a trouble spot, with Justin Haley, Brad Keselowski, Elliott and Chastain (twice) all spinning in the 90-degree right-hander.

Chase Elliott went for a ride before the end of Stage 1. #NASCAR

Chris Buescher in the RFK Racing No. 17 had just cracked the top 10 when he came to pit road with three laps left on lap 12. Mysteriously, black smoke began billowing from inside the driver compartment and fire erupted out the passenger window. Unbelievably, after the Violet Defense crew emptied a fire extinguisher into the car, and a few extra stops to blow out the smoke damage and extinguisher foam, Buescher was able to keep going to an unlikely top 10.

A strategy call to stay out put Ryan Blaney and William Byron to the front to start stage two, and the Goodyears held up far better than anyone expected. Blaney and Byron were able to hold off Reddick and Cindric’s new tires until first Byron, on lap 30, and Blaney, with two remaining in the stage, came down pit road.

The first turn continued to bite drivers, with Kevin Harvick immediately knocked into a spin from contact that also gave Alex Bowman a flat tire.

The Stewart-Haas Racing driver, who needs a win to make the playoffs, spins. #NASCAR

More than 40 laps later, an angry Harvick retaliated against Bowman in turn 9, suffering left rear damage that sent the No. 4 behind the wall.

On lap 24, Aric Almirola made hard contact with Kyle Larson on the entrance to turn 1, putting both cars laps down after suspension repairs. Allmendinger, Burton and Custer also suffered off-track excursions during the second stage.

Bell, Wallace, Ty Dillon and Denny Hamlin made the strategy call to stay out at the end of the second stage, hoping to stretch fuel and make it to the end on just one more stop.

At the start of stage three, Reddick pushed Bell out to a five-second gap ahead of the third-place car, and with 33 laps to go he powered around the outside of Bell’s No. 20 to retake the lead, the first non-strategy pass for the lead all afternoon, and a lead Reddick would hold until the checkered flag. Ahead of the rival strategy, Reddick led Bell to pit road for the final time one lap later.

The strategies had been set and the leaders had settled into a rhythm, but then with 22 laps remaining, Larson drove into turn 1 with absolutely no brakes at all and nothing he could do to avoid the No. 42 of Ty Dillon.

Larson loses his brakes and slams into the No. 42 at near-full speed. #NASCAR

Thankfully, both drivers climbed from their cars under their own power, and Larson jogged over to apologize to Dillon for bringing his day to an early end.

Outside the care center, Dillon told Frontstretch, “it was an impact like I’ve never felt in my life … that was a big one. I just hate it for our No. 42 Ferris Camaro … nothing you can do about it, just a string of bad luck we’ve had this season.”

Restarting with 19 to go, Reddick, Blaney, Elliott and Allmendinger got the jump on Bell, with Reddick scooting out to three-second lead while Blaney served as the proverbial cork in the bottle.

Elliott had just gotten around the No. 12 when debris from Bell’s blown tire brought out the caution with nine laps to go, stacking up the field for another melee into turn 1 with three laps to go.

​​Contact between Byron and Blaney sent Elliott spinning in turn 1, while Kyle Busch and Chase Briscoe spun, knocking Bubba Wallace off-track. Then a few corners later, contact between Erik Jones, Austin Dillon and Martin Truex Jr. lodged the No. 3 in the gravel trap, bringing out the caution again and setting up the overtime finish.

With the win, his second in the last five races, Reddick vaults to fifth in the playoff standings, even with fellow two-time winners Logano and Hamlin. Blaney extends his advantage over the cutline to 121 points, while Truex holds a 96-point advantage over Harvick in 17th place.

Elliott maintains his regular-season points lead of 103 points on second-place Chastain, with Blaney 125 behind the leader.

With only four races remaining until the playoffs, the NASCAR Cup Series heads next week to Michigan International Speedway for the Firekeepers Casino 400, Sunday August 7 at 3 p.m. ET on USA Network.

If the 5 had hit the 11 or 19 like he did the 42 they would have driven away like swatting a fly. The 11 played ping pong with the other cars and the car wasn’t affected at all.

the reverand cars are holy rollers.