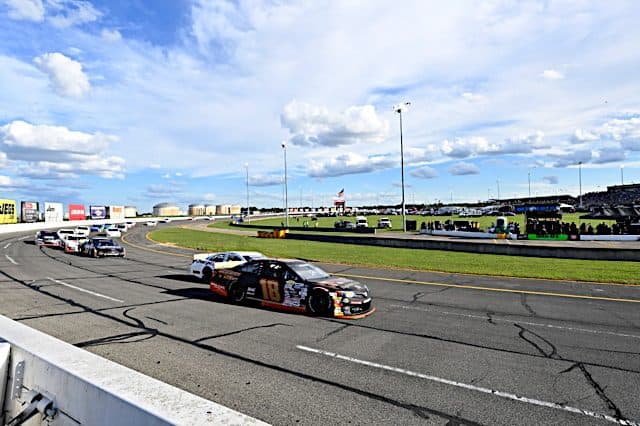 In the ARCA return to Lucas Oil Indianapolis Raceway Park (IRP) this past Friday (July 29), two of the four drivers in the race with the last name “Smith” dominated the competition, combining to lead all the laps. Chandler Smith led 111 laps en route to winning the Reese’s 200, marking his third straight ARCA victory at the 0.686-mile short track. Sammy Smith finished second, leading the other 89 laps.

The duo’s dominance left only six drivers on the lead lap, but the ARCA championship battle tightened. Rajah Caruth now leads Nick Sanchez by one point and Daniel Dye by five. These three are more than one race’s worth of points ahead of their competitors. Toni Breidinger is fourth in points, ahead of fifth place Greg Van Alst by one point.

After three races in July, where do the ARCA contenders fall in the Frontstretch power rankings?

“Yeah, just got too tight there in the end, I think,” Sammy Smith told Frontstretch post-race. “That restart was tough. I don’t know, I feel like a good job. He was able to get me, just couldn’t get back by him.”

Sammy Smith trails Brad Smith by 19 points for seventh place in the championship standings. The next track on the ARCA schedule is Michigan International Speedway (MIS). Although Sammy Smith has never competed there before, the No. 18 team won that race last year with Ty Gibbs. Interestingly, Smith has yet to win at a track where Gibbs was victorious last year. Will that feat occur in Brooklyn, Mich.?

Taylor Gray quietly finished third, unable to catch the top two in the ARCA event at IRP. Despite only competing part-time, Gray leads ARCA with three victories and he also is tied for the most top five finishes.

Following his ARCA race, Gray then jumped into the No. 17 Ford for the NASCAR Camping World Truck Series race also at IRP. He had a shot at his first career Truck win, but John Hunter Nemechek spun Gray out from the lead. Gray was understandably mad after the race and he declined to speak to Frontstretch.

Heart broken is all I can say. Thank you @dgr_racing @FordPerformance

Caruth entered IRP with a new crew chief. After Brad Means served as Caruth’s crew chief at Pocono Raceway, Rev Racing announced Means has that role for the rest of this season. A team spokesperson also confirmed to Frontstretch that it was an organizational change, and former crew chief Brad Parrott is no longer with Rev.

“His talent level is very high,” Means said about Caruth in the team press release. “To be able to work with someone who has that ability so early on in their career is really exciting. What he has accomplished in such a short time period is impressive. I look forward to continuing on this trajectory, as we work toward the championship.”

At IRP, Caruth qualified seventh but finished eighth, one lap down. It is his fifth straight top 10 finish, and he is tied for the series-high top 10 finishes.

Sanchez brought his No. 2 Chevrolet home with a seventh-place finish, the first driver one lap down. Yes, Sanchez only trails his teammate Caruth by one point in the championship standings, but Sanchez must finish on the lead lap more often. In 11 ARCA races this season, Sanchez only has five lead-lap finishes. He already has more non-lead-lap finishes this season than he had last year.

“When I look back at this season, there’s nine races we could’ve won,” Sanchez told Frontstretch. “We should have had two or three of them on top of our two [victories]. Obviously, the execution, there’s been some struggles there, but overall speed has been faster than last year.

“When you go back and look at the execution tally, we are probably at a 25-point deficit from where we could be. I look at that, but that part of the season’s over. Now we are due for a win at this point; I think the speed’s there.”

Dye finished the best of the championship three contenders in fourth place. He said he thought he had a car capable of finishing in third place, but he had to recover after he made the ARCA Reese’s Sweet Move of the Race.

Dye now has five straight top 10s, and three of those are top five finishes. Dye firmly has his eyes on the prize: the ARCA championship.

Eight days after the ARCA field left IRP, the series travels about 240 miles northwest to MIS. The Henry Ford Health 200 will take place on Saturday, Aug. 6 at 6:30 p.m. ET, with TV coverage provided by MAVTV Motorsports Network and available on FloRacing.