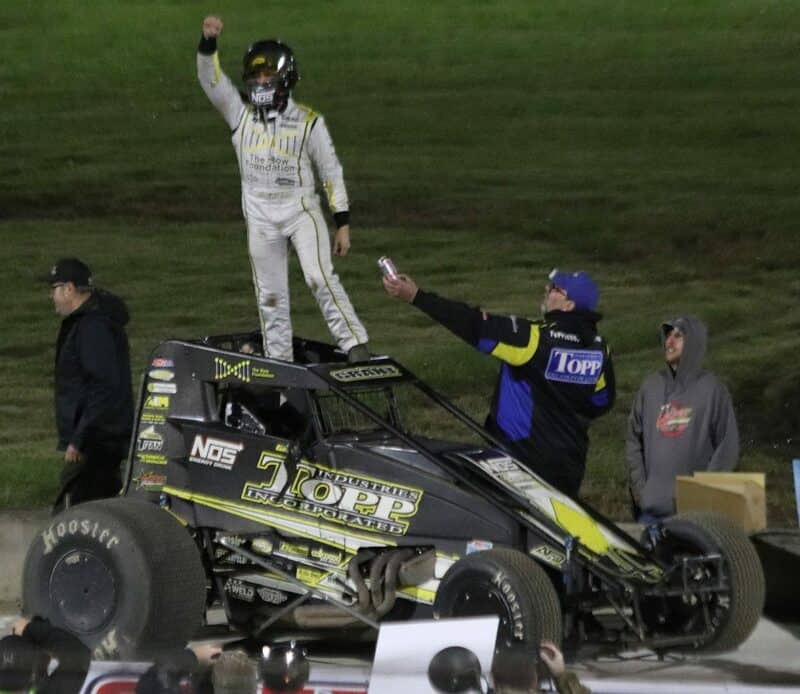 Overshadowing a stellar open night of Indiana Sprint Week that saw the highest car count for ISW’s opening event since 2014 and a feature decided by Shane Cottle stealing the lead from Justin Grant on a green-white-checkered finish was the dropkick heard ‘round the world after CJ Leary went after Robert Ballou.

To put it in context, Ballou and Leary made contact on the exit of turn 4, sending Leary’s machine into a violent tumble that saw his tail tank separate from the chassis. It was an ugly night for Ballou, who was called out both by Cottle and Grant in their victory lane interviews and who also involved in another red-flag incident when he got out of shape on the backstretch and swiped into Brady Bacon, sending that car flipping as well.

The Bacon incident was nasty and entirely Ballou’s fault. Having watched the replay of Ballou/Leary a half-dozen times, I’m still not convinced it wasn’t just a racing incident.

But even if Ballou was entirely at fault for the Leary incident, there’s no justifying Leary’s actions in drop-kicking a man who’s completely restrained and unable to defend himself within a racecar. It was fitting that Leary landed on his ass trying to play Karate Kid, because someone should have been there to put him on said ass for acting such a, well, ass.

And while this incident would not prove to have a lasting impact on Indiana Sprint Week, it is part of a behavioral problem that is becoming epidemic in sprint car racing.

The same Friday (July 22) that saw this incident occur saw a similar incident happen in the World of Outlaws race at Williams Grove Speedway, where Freddie Rahmer attacked Danny Dietrich in his racecar on pit road after the two tangled in a heat race.

And there was also the incident back in the spring that saw Logan Wagner take shots at a strapped-in Anthony Macri under a red flag at Port Royal Speedway after an on-track incident.

USAC, and any other sanctioning body hosting sprint car races, has got to get this nonsense under control. Attacking drivers that are in full safety restraints should be a no-no just on general principle, but it’s impossible to expect any member of society to behave like a grown man these days. This issue is compounded in sprint car racing though, because drivers in sprint cars literally can’t go anywhere. The cars have to be push started, meaning once they stop on track they’re parked and completely vulnerable.

USAC officials this Friday night allowed both Bacon and Leary to confront Ballou on track during red-flag periods. Bacon to his credit delivered a message and walked off. But now that there’s a demonstrated pattern of drivers opting to act like Worldstar thugs and attacking opponents while they’re down, track officials owe it to competitors to keep them protected while competing.

Mother Nature in all her wisdom rained out Saturday’s scheduled race at Kokomo Speedway, and a further rainout that saw no feature get contested at Lawrenceburg on Sunday left plenty of time for emotions to cool by the time the next Indiana Sprint Week feature took the green flag at Circle City Raceway Monday night (July 25). Winning that race was none other than Leary, without a trace of the hotheadedness that saw him become a wrestler in a firesuit Friday night.

It’s a theme that Indiana would see play out again later in the week, when veteran Grant Enfinger drove (cleanly) through a mess of young gun NASCAR drivers bowling over each other at Indianapolis Raceway Park to win that Friday’s (July 29) Truck Series race.

Clay or blacktop, hard and clean has a way of winning out.

It’s high praise in the dirt track world to have a hashtag or acronym tied to a facility. Dirt fans heard plenty of times this weekend that the Fairbury American Legion Speedway was “FALSy” when the racing got good on track during the Prairie Dirt Classic.

Kokomo Speedway certainly proved worthy of that title, as their Indiana Sprint Week feature on Tuesday night (July 26) was an achievement. Not only were the grandstands all but full despite the race being moved from Saturday night to a Tuesday, but the surface allowed eventual winner Grant, Ballou and Kyle Cummins to put on a spectacle at the front of the field, with the feature going side-by-side for pretty much its entire second half.

Said Ballou after his first podium of ISW, the slicing and dicing was made possible because Kokomo was the first track that put together a surface capable of racing on. While I’m not 100% on that bandwagon, there is no debate that the Kokomo surface this Tuesday night was the smoothest of the three features contested.

Kokomo markets itself with the acronym #GYATK (Get Your Ass to Kokomo). I had planned to make the trip to the midwest for Indiana Sprint Week before real life got in the way. This feature at Kokomo was the first of ISW to have me truly lamenting my ass wasn’t in Indiana.

Everything Ill-Timed at Lincoln Park

Let’s start with Thomas Meseraull, who found out he had been fired from his ride because he found another driver’s seat being installed when he arrived.

Got to the track and jack was putting @AntonHernandez_ seat in the car. Apparently I don’t drive the car hard enough. Not the first time I been fired during sprint week. Shit happens oh well, sry Jack I tried 🤷‍♂️ #pullstearoff

His replacement, Anton Hernandez, then found himself removed from that same racecar during an ensuing rain delay.

Rain around a dirt track is a sensitive thing. Getting a light rain an hour or two before race time is often a blessing for a racing surface. Getting rain during a race program, however, fails to get the timing right, because it leaves fewer competitive laps for the track surface and moisture to get worked in and widened out.

Case in point, Thursday night’s (July 28) feature at Lincoln Park. While race winner Mitchel Moles credited the folks at USAC and Lincoln Park for getting the program in (and they do deserve credit for that), the reality is that the track was so juiced up that it never got wide enough for the high-powered sprints to get to full-fledge sliding.

Yet, with two laps to go, the racing Gods finally decided to smile down on the Indiana Speed Week feature, with Brady Bacon finally finding enough traction on the high side of the track to take the lead from Moles, who had at that point led 28 consecutive laps of the feature… only for a caution to fly involving, you guessed it, Ballou, who had tangled with Kevin Thomas Jr. KTJ was visibly upset with Ballou, but there was no replay provided during the Flo Racing stream to know who was at fault.

As a result, Bacon’s pass was not scored.

On the ensuing restart, Moles capitalized and kept the lead for good.

Of course, race fans should have expected such ill-timing as they settled in for Thursday’s feature. Because the PA crew at Lincoln Park announced that the concessions stand was going to a two items for the price of one to clear out excess food… during the pace laps. Note to concession stands out there, if you really want to get rid of food put it in a tray, stand by the gates as the crowd exits and take singles. Lot more effective than expecting fans to miss a feature start to eat the leftovers.

Ballou was involved in another red-flag incident during Friday’s (July 29) Indiana Sprint Week feature at Bloomington, though this one for a change involved only the driver of the No. 12 car, who got out of shape in turn 3 and did a hop, skip and jump before a lazy flip.

But despite being involved in a single-car spin, Ballou’s machine still found a way to cause trouble on the track. As he was being towed off the track, Ballou’s wounded racecar ended up making contact with the parked machine of Jason McDougal on the backstretch. Fortunately, McDougal’s car was not damaged in the incident.

But it’s hard to shake the label of villain of Indiana Sprint Week when your car is causing trouble under red without the driver even wheeling it.

Ballou was alive and kicking enough to score the final feature win of Indiana Sprint Week Saturday night (July 30) at Tri-State Speedway, but it was Ione, Calif.’s Justin Grant that won the war, claiming the overall points title for the first time in his 13-year USAC career with a third-place finish.

Grant’s consistency was undeniable. Posting a feature win at Kokomo and an average finish of 2.67 over the course of the mini series, Grant’s points-racing effort is about as good as they come. And that Grant was able to avoid all the drama of racing with Ballou and treacherous race conditions that ate up cars during opening night qualifying at Gas City and sent drivers Cottle and Jake Swanson to the hospital proved a winning recipe.

After all the drama Grant found himself in the center of to start the 2022 season, square in the middle of a tire-treatment dilemma that resulted in near-civil war between the USAC sanction and the newly formed Xtreme Sprint Car Series, go figure that avoiding said drama paid off with a seat in a rocking chair.