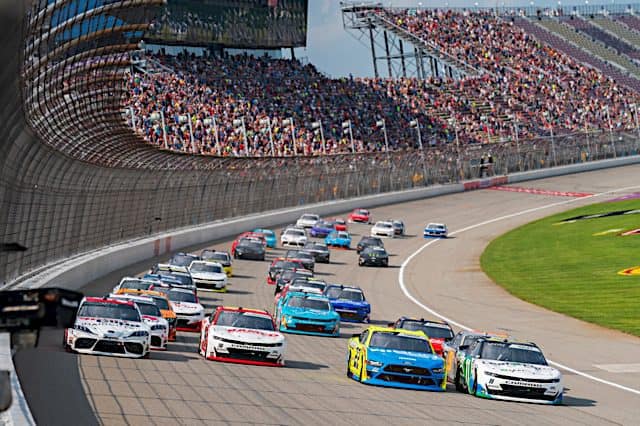 The NASCAR Xfinity Series is set to race in the Great Lakes region at Michigan International Speedway.

Forty-one cars are entered for 38 spots, so three drivers will make the trip home following qualifying.

Blaine Perkins will be in the No. 02 Detroit Taco Company Chevrolet for Our Motorsports. Perkins made eight starts with the team in 2021 and will attempt his NXS season debut this weekend. Our announced today that it and Brett Moffitt have parted ways.

Joe Graf Jr. attempts to make the race in the No. 07 Bucked Up Energy Ford. Chase Briscoe piloted the ride at the Indianapolis Motor Speedway road course.

Akinori Ogata attempts to make his second start of 2022 with MBM Motorsports in the No. 13 Toyota. Ogata made his season debut at New Hampshire Motor Speedway.

John Hunter Nemechek looks to make his first start since Road America in the No. 26 Stillhouse Toyota for Sam Hunt Racing.

Kyle Sieg is back in the No. 28 Ford for RSS Racing to attempt his 12th start of the season.

Jesse Iwuji returns to the No. 34 Chevrolet for Jesse Iwuji Motorsports. Iwuji last competed at Atlanta Motor Speedway in July.

Patrick Emerling attempts to qualify the No. 35 Chevrolet in for Emerling Gase Motorsports. Parker Kligerman piloted the ride at Indianapolis.

Josh Bilicki will attempt to drive the No. 45 Insurance King Chevrolet for Alpha Prime Racing. Bilicki will look to make his fifth start of the year.

Brennan Poole returns to the No. 47 Chevrolet for Mike Harmon Racing. Brandon Brown was in the seat at Indianapolis. Brown will return to the No. 68 Brandonbilt Foundations Chevrolet this weekend.

Dillon Bassett will attempt to make his second start of the season. Bassett competed at Nashville Superspeedway after failing to qualify in his first two appearances. He will drive the No. 77 Chevrolet for Bassett Racing.