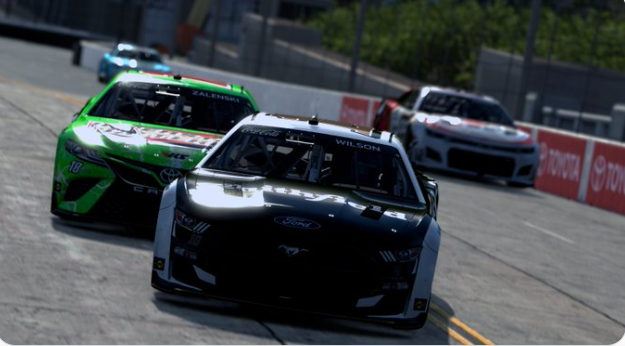 On Tuesday night (Aug. 2), the drivers of the eNASCAR Coca-Cola iRacing Series took a break from the stress of the regular season to compete in an exhibition All-Star Race on the Chicago Street Course.

Steven Wilson wound up the being star among the All-Stars by leading the final six laps to claim the victory. It is Wilson’s third victory of 2022 to go along with regular season wins at Atlanta Motor Speedway and Road America.

The 12-turn, 2.14-mile road course meandering through the heart of the Windy City was first featured in a 2021 Pro Invitational Series race and will be on the NASCAR Cup Series Schedule in 2023.

The Coca-Cola iRacing All-Star event was actually three different races in one. The evening’s festivities commenced with a 12-lap open race comprised of 15 full-time series drivers who had not yet clinched a spot in the All-Star Race. The topnfive finishers in the open race would advance to the main event.

Dylan Duval took his No. 41 Gearwrench/Stewart-Haas eSports Ford to the front on the initial start and led all but one lap in the open. However, Duval failed to lead the most important lap: the last one. In a final lap battle for the win, Garrett Manes in the No.31 Elliott Sadler eSports Chevrolet got into the back of Duval and turned him around.

“We had a good run in our Gearwrench Ford Mustang. I’m sick of getting used up by these kids. It’s definitely frustrating,” a dejected Duval said in his post-race interview with Alan Cavanna.

WOW! THEY TOUCH FOR THE LEAD! Dylan Duval is OUT! Garrett Manes falls to fourth but he advances! @Parker79p sneaks through and WINS!

Led every lap except the last one.

It's time to stand my ground and not let these fragile minded children continue to ruin my races. I put too much time and effort into this to be pushed around the way I have.

Should be in the show, we're not but we'll get them when it counts. pic.twitter.com/Ys6J7DLJeS

This opened the door for Parker Retzlaff to pilot his No. 6 RFK Racing Ford to the win in the All-Star Open Race. Blake Reynolds, Brian Mercurio, Manes and Dylan Ault finished second through fifth to punch their tickets into the main All-Star Race. Duval plummeted to seventh after the final lap incident.

“I saw [Duval and Manes] battling the lap before. It looked like they were going to wreck each other for the win. I waited back a little to try to capitalize on it, and I did,” Retzlaff said.

With the All-Star field set, the 22 drivers took to the track for an eight-lap heat race. The top-eight finishers from the heat race would be inverted for the 16-lap feature, with all the other drivers falling in behind in order of heat race finish.

Unlike the open race, the heat race did not produce any last-lap drama, with Mitchell deJong leading all the laps and winning by 1.886 seconds in his No.23 Logitech/23XI Racing Toyota. Graham Bowlin placed second, and Bobby Zalenski finished third. By virtue of his eighth-place finish, Matt Bussa would start the feature race on the pole in his No. 75 Mode Motorsports Ford.

When the green flag waved for the feature race, Bussa made the most of his pole position to lead the opening laps. Bumped back to eighth with the inversion, deJong tried to make his way back to the front, but his progress was halted when he wrecked on lap three, taking Michael Conti in the No. 8 JR Motorsports Chevrolet with him out of contention.

Lap 11 brought the first lead change of the main event, as Wilson navigated his No. 10 Smithfield/Stewart-Haas eSports Ford by Bussa. Later that lap, race control put out a scheduled competition caution to bunch up the field.

Wilson got a good jump on the final restart with three laps to go and then held off a furious rally from Zalenski to take the checkered flag. Zalenski held on for second over Casey Kirwan. Bowlin brought it home fourth, and Manes rounded out the top five.

“I didn’t know I had that pace in me tonight,” Wilson said. “I just had to make sure [Zalenski] couldn’t get to my inside and bring it home.”

Wilson’s prize for winning the All-Star Race is four tickets and pit passes to a NASCAR Cup Series race of his choice as well as a NASCAR driving experience.

“I’m pretty excited about that,” Wilson said after being told about the prize. “Thanks to all these guys at Stewart-Haas Racing and all our partners.”

I can't wait to be driving a @chicagobulls City Edition inspired @SunocoRacing #5 next Tuesday! I’ve been a huge Bulls fan for a long time and I’m so excited to see this beauty hit the track!#WeRise x @SunocoRacing

It's an @eNASCARCocaCola All-Star showdown tonight from the streets of Chicago!

Catch us in the All-Star Open at 9pm EST on https://t.co/yfHsgtOCuQ! pic.twitter.com/QMkBm7ykgy

The eNASCAR Coca-Cola iRacing Series will resume its regular season schedule on the road course of Watkins Glen International on Tuesday, Aug. 16. It is the next to last race of the regular season. The race will start at 9 p.m. ET, and it will be broadcast live on eNASCAR.com/live, YouTube.com/iRacing and Twitch.tv/iRacing.