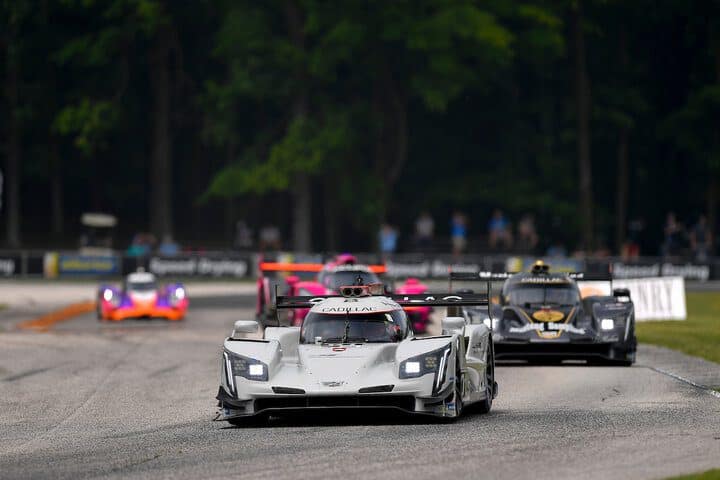 This weekend, the IMSA WeatherTech SportsCar Championship will be at Road America for IMSA Fastlane SportsCar Weekend.  This is the only sprint race on the calendar in which all five classes will compete.  37 teams are entered for the race.

In the DPi class, there are the six full-time squads entered.  There will be four Cadillacs and two Acuras on the grid.  Meyer Shank Racing with Curb-Agajanian’s Tom Blomqvist and Oliver Jarvis currently have a 56-point lead over Wayne Taylor Racing’s Filipe Albuquerque and Ricky Taylor.  This is effectively only a couple of positions between the team.

LMP2 has six entries.  At PR1 Mathiasen Motorsports, the sprint lineup of Josh Pierson and Patrick Kelly are back in the car in place of Mikkel Jensen, Ben Keating and Scott Huffaker.  At High Class Racing, Fabio Scherer is driving alongside Dennis Andersen this weekend instead of Anders Fjordbach.  Scherer was supposed to be the team’s third driver for the endurance rounds only.

LMP3 has nine entries.  JDC-Miller MotorSports is fielding an entry for Gerry Kraut and Scott Andrews.  This car is a Duqueine chassis wearing No. 90.  Kraut, 70, has two previous WeatherTech starts with the team.  They were both at Sebring in 2014 and 2015, where he finished fourth in the former PC class both times.

Andrews has been all over the place this year.  He has made three WeatherTech starts in 2022 for three different teams in two classes.  He was with Team Korthoff Motorsports for the Rolex 24 at Daytona, where he finished third.  He drove for VasserSullivan at Sebring in place of Aaron Telitz, who came down with COVID-19.  He finished seventh there.  At Canadian Tire Motorsport Park, Andrews drove in place of Felipe Fraga, who had DTM responsibilities (Fraga is back this week in the No. 74).  He had a chance to win before being eliminated in an incident.  He also had a full-time gig with Riley Motorsports in IMSA Michelin Pilot Challenge in a Toyota GR Supra GT4.  However, that team has missed the last two races after a big crash at Watkins Glen.

At Sean Creech Motorsports, Malthe Jakobsen will share the No. 33 Ligier with Joao Barbosa instead of Dr. Lance Willsey.  James French will also return to Performance Tech Motorsports in place of Rasmus Lindh.  French has driven for the team off and on since 2014.

The GTD Pro class has only five entries.  It is unchanged since Lime Rock.  WeatherTech Racing chose to switch to regular GTD after the entry list came out for Lime Rock.

The GTD class has 11 entries.  NTe Sport is back with Jaden Conwright and Marco Holzer in their Lamborghini.  Meanwhile, Daniel Juncadella is back in the WeatherTech Racing Mercedes alongside Cooper MacNeil, replacing Jules Gounon.

The IMSA Fastlane SportsCar Weekend event is scheduled to go green at 11:40 a.m. ET Sunday morning (10:40 a.m. CT).  The race will air in full live on Peacock.  It will be picked up in progress on USA at Noon.