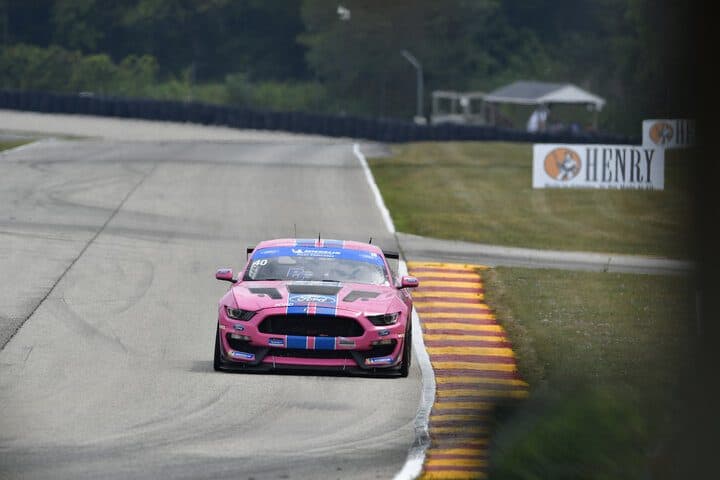 For this weekend’s four-hour IMSA Michelin Pilot Challenge race at Road America, there are 40 teams on the entry list.  This is an increase of six teams from the last race at Lime Rock Park.  In addition, since this is a four-hour event, there are a number of three-driver lineups.

In the Grand Sport class, there are 27 teams entered.  The biggest change this week comes at PF Racing, where the team announced Wednesday (Aug. 3) that Chad McCumbee is out of the car for the rest of the year.  This is not because of some kind of disagreement between McCumbee and the Pesek family.  McCumbee has weekend conflicts that will prevent him from driving the No. 40 Ford Mustang GT4 going forward.  In his place will be Joey Hand, former Ford GT factory driver, development driver for the upcoming new for 2023 Ford Mustang GT4 and the new GT3 Mustang for 2024.  In addition to that work, Hand is racing part-time for Rick Ware Racing in the NASCAR Cup Series.  Hand previously would have been ineligible to race in the series due to his platinum driver rating with the FIA, but was recently downgraded to gold.

We're thrilled to welcome @JoeyHandRacing to the PF Racing family! Joey will be commanding the #40 @OzarksRaceway Ford Mustang with @jpesek61 in the IMSA Michelin Pilot Challenge 4-hour race at Road America.

Hardpoint has expanded to two Porsches for this week.  In the No. 9 Porsche will be Derek DeBoer, Sam Owen and Sean Gibbons.  All three drivers currently race in SRO America.  Gibbons and Owen are teammates in Pirelli GT4 America SprintX for OGH Racing under the NOLAsport banner in the Am-class.  DeBoer also races in the Am-class, but for The Racers Group.  In the second car, John Capestro-Dubets joins regular drivers Nick Galante and Eric McAlister.

Javier Quiros returns to Riley Motorsports to share the No. 14 Supra with Alfredo Najri and Thiago Camilo.  Meanwhile, the No. 21 Supra returns after missing the last two races after Anton Dias Perera crashed the car at Watkins Glen.  Colin Braun is back with the team as well.

At Rennsport One, Alexandre Premat is back in the No. 28, replacing Capestro-Dubets.  Kelly-Moss is back with their Porsche that they debuted at Watkins Glen, while Tom Dyer is back with CarBahn Motorsports with Peregrine Racing.

In TCR, there are 13 teams entered.  However, the biggest surprise of the lot is who is not entered.  JDC-Miller MotorSports’ No. 17 Audi, the team that won at Lime Rock with Mikey Taylor and Chris Miller, is currently not on the entry list.

Honda of America Racing Team (HART) is back with their Honda Civic Type-R.  Ryan Eversley will be back in the fold alongside regular drivers Chad Gilsinger and Steve Eich.  Eversley previously drove for the team in 2019.

Belgard & Techniseal Racing has expanded to two cars.  In the regular No. 15, Eric Rockwell is back, replacing Preston Brown.  They are joined by Nick Loojimans, a Canadian racer who competed at Watkins Glen and Canadian Tire Motorsport Park earlier this season for TWOth Autosport.  Brown moves over to the new No. 84, which will have Alex Rockwell and Kyle Raineri.

The Road America 240 is scheduled to go green at 2:15 p.m. ET Saturday afternoon.  The race will air live on Peacock.