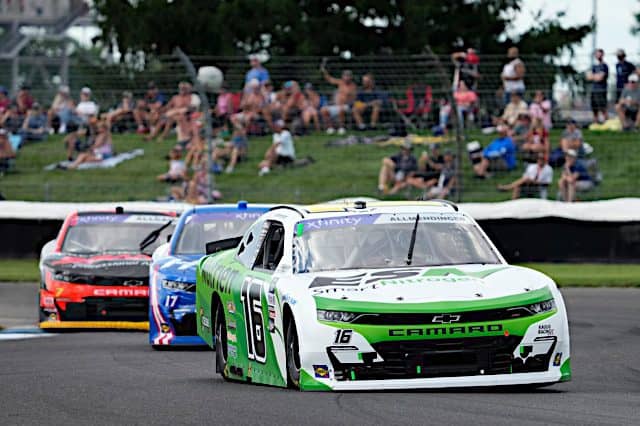 Yes, all are trophies, but more importantly, the identity of each one is unquestionable. When you see them, you know what their connection is.

The NASCAR Cup Series is the world’s top echelon of stock car racing. The NASCAR Camping World Truck Series is the pickup version of the Cup Series with up-and-coming drivers sprinkled in with some truck lifers and the occasional twilight-years driver. But what is the identity of the NASCAR Xfinity Series?

A quarter of a century ago, NASCAR’s top three divisions’ identities were cut and dry. The Cup Series image hasn’t changed, as it was and remains the highest form of stock car racing. Trucks were a series that raced the majority of its schedule on oval tracks less than one mile in length, with a few larger speedways and road courses.

See also
Dropping the Hammer: As the World Turns With Richard Childress Racing
The Xfinity Series in the late 1990s, then the NASCAR Busch Series, was a blend of the two divisions. Short tracks, speedways, superspeedways and road courses filled out the schedule. Additionally, standalone races were common. These standalone races could be at tracks the Cup or even Trucks visited at different times of the season. They also could have been tracks exclusive to the Xfinity Series.

But in 2022, 32 of the 33 races the Xfinity field races at are support races for the Cup Series — racing at the same track on the same weekend. The race at Portland International Raceway in June was the lone standalone race.

Part of the identity of the Xfinity Series 25 years ago and even as recent as 11 years ago was that it traveled to tracks and markets the Cup Series didn’t. It raced on tracks like Nashville Fairgrounds Speedway, Myrtle Beach Speedway, Pikes Peak International Raceway, World Wide Technology Raceway (Gateway), Kentucky Speedway and Memphis International Raceway. The only way the biggest stars in NASCAR would race there was if they raced in the Xfinity Series.

For many reasons, not limited to financial and economical, these tracks were dropped or replaced, and slowly NASCAR’s second-tier series began to look more and more like Cup 2.0. This change wasn’t limited to the Xfinity Series, but the Trucks still went to Canada and raced on dirt. And this, on top of being pickup trucks and not a car, made the Truck Series have more of a standout identity with unique races compared to Xfinity.

A small shot in the arm for Xfinity Series uniqueness came in 2011 when the then-Nationwide Series Car of Tomorrow car was introduced, and Ford introduced the Mustang and Dodge the Challenger to NASCAR. Later in 2013, Chevrolet brought the Camaro. The muscle or pony cars made the Xfinity Series have a different identity, but now the Mustang and Camaro are both in the Cup Series, and Dodge is currently out of the sport.

The Indianapolis race weekend closed out a month that included an announcement of the Cup Series’ first street course race (at least in the modern era), heightened talk of electric vehicles and which configuration of Indianapolis Motor Speedway is right for NASCAR.

One week ago, the Next Gen car performed outstanding on the flat, 2.5-mile triangular oval at Pocono Raceway. This led to many sparking the discussion of a Cup return to the Indianapolis oval because Pocono and Indianapolis are comparable.

Whether you agree with me or not, when the Xfinity Series left Lucas Oil Indianapolis Raceway Park after 2011 and was replaced by IMS on the schedule, it devalued the Brickyard 400 for the Cup Series. From 1994 to 2011, if you wanted to race a stock car at the world-renowned Indianapolis Motor Speedway, you had to be among the 43 best drivers in the world. But the Xfinity transitioned to racing in the wake of the Brickyard 400.

With the Cup race at Pocono being such a success and the Trucks returning to IRP, NASCAR and IMS have a golden opportunity to make NASCAR’s annual trip to Indianapolis one of the most diverse on the calendar. If the Cup Series returns to the oval, the Trucks continue racing at IRP and the Xfinity Series remains on the IMS road course, each series brings something unique to race fans visiting Indy. The Cup races on the historic Indy oval, the Trucks race on a short track and Xfinity drivers compete on a road course.

I’ll go out on a very thin limb and say I’m not the only one who thinks that isn’t a fantastic group of tickets. And I challenge you to find a more diverse weekend in NASCAR — in one city.

This is just one identity fix for NASCAR’s second tier series — going to unique or different racetracks just as it did for the better part of its first 30 years of existence.

What is another way to make the Xfinity Series unique again: going electric.

I won’t hide my opinion that the thought of NASCAR, let alone all racing and commercial vehicles, going completely electric … I don’t like it. But it looks like that is the direction racing is going. I’d implore the highest levels of racing to remain using combustible engines. Because, after all, the roar of the engines is part of the draw.

What the FIA has done with Formula E is an excellent example of what NASCAR could do to the Xfinity Series. If the Xfinity Series goes all-electric, that alone gives the series a brand-new identity that would be unique in stock car racing. Then, when you add street courses, you have a perfect mixture of branding.

In Formula E’s short history, most races have been on temporary street courses. It brings a high level of racing to the masses without the loud combustible engine noise while showcasing an OEM’s electric technology. A reimagined Xfinity Series could race strictly at street courses, temporary courses (i.e., St. Petersburg) and short tracks. Why not have some quarter- and third-mile exhibition races during NASCAR Cup Series weekends, like at Charlotte Motor Speedway or Atlanta Motor Speedway?

Disclaimer: The author is an employee of Speedway Motorsports.

Suppose the Cup Series continues to race on the big, high-speed and high-banked ovals. That continues the existing identity for Cup, and the Trucks continue to be trucks — having the Xfinity Series go electric and street racing gives them a unique spot in stock car racing, let alone the world auto racing stage.

No matter how you slice it up, the Xfinity Series is in an identity crisis. Yes, it has excellent racing, but what separates it from Cup and Trucks? A “Names Are Made Here” slogan? In 2022, that isn’t enough, especially when NASCAR is marketing each on its own and not strictly a feeder series, similar to what Formula 2 is to Formula One.

The short-term solution to the identity crisis that the Xfinity Series is suffering is going to tracks and markets the Cup Series does not or finding ways to replicate the 2020 Brickyard weekend at racetracks across the calendar. The long-term solution is a drastic rebrand, such as electrification and SUV/crossover bodies. And since there is no use denying that electric power units, at the very least hybrid technology, will play a role in auto racing’s future, the Xfinity Series is the obvious choice for this change.

“No matter how you slice it up, the Xfinity Series is in an identity crisis. Yes, it has excellent racing, but what separates it from Cup and Trucks?” – Um, maybe the excellent racing?? Xfinity is the better series now and has been for several years – so of course that means NASCAR needs to change it?? I know, go tell the boss to dump dirt on all the tracks they run – that will fix it…

What is another way to end the Xfinity Series permanently: going electric. There – fixed that sentence for you.