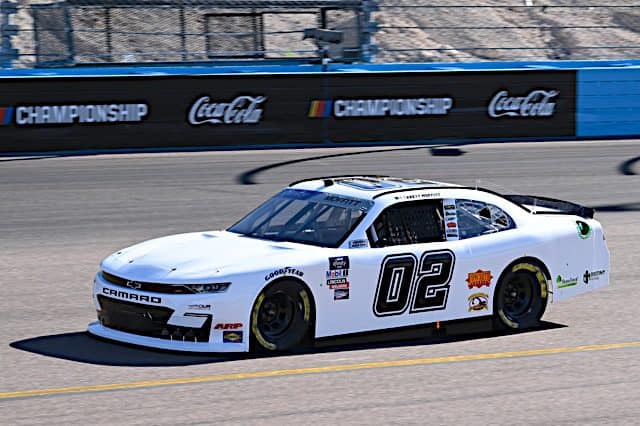 It’s the toughest side of motorsports when someone loses their ride strictly over money. That’s what happened to Brett Moffitt, who was schedule to race the full NASCAR Xfinity Series season in the No. 02 Our Motorsports Chevrolet. However, Moffitt has been replaced due to lack of funding.

He is an interesting figure in motorsports. He has a ton of talent, won the NASCAR Camping World Truck Series championship in the 2018 season driving for Hattori Racing Enterprises and has 12 wins in the Truck Series, which is more than a lot of drivers currently in the Cup Series.

Yet, Moffitt has done some things that has made him fall out of favor with a few in the garage. That has led us to wonder: Does Brett Moffitt deserve another opportunity in NASCAR? Mark Kristl and Stephen Stumpf debate.

With three months left in this NASCAR season, Brett Moffitt ought to spend it wisely. He is currently unemployed. Rather than merely seek seat time in various NASCAR events, Moffitt would be better suited finding decent opportunities to audition for next year. Yes, Moffitt should be considered for a full-time NASCAR ride, especially in the NASCAR Camping World Truck Series.

When Moffitt switched his points eligibility from Niece Motorsports in the Truck Series to Our Motorsports in the NASCAR Xfinity Series last year, it seemed to be a wise move. Moffitt and Niece struggled, only scoring one top 10 together while rookie Carson Hocevar burst onto the Trucks scene. Driving for upstart Our in Xfinity, Moffitt finished runner-up in the season opener and accrued four top-10 finishes. For all involved, it was the best decision.

Yet Moffitt’s initial success piloting the No. 02 waned, as he never finished inside the top five for the rest of the season and only managed six more top 10s in the other 23 races. This year, his return appeared beneficial for the organization, yet only four top 10s and a lack of sponsorship cost Moffitt his ride. What a fall from triumphantly hoisting the Truck Series championship trophy in 2018.

Moffitt still has value in the garage. He is a few days shy of turning 30 years old, so he still should have years left in his NASCAR career. Moreover, Moffitt has competed in all three NASCAR series with 219 combined starts. He knows the racetracks, he knows the competitors and he knows how to contend for victories.

No, Moffitt is not in consideration for a NASCAR Cup Series ride. His performance in Xfinity probably will not garner him many offers either and certainly not in top 10 equipment. If a team such as Bassett Racing approached Moffitt with an offer, while it would give him a paycheck, running in the back half of the field likely is not what Moffitt wants nor needs to revitalize his NASCAR career.

The Truck Series garage is Moffitt’s best opportunity. He is a past champion, so his provisional is an asset, especially to teams struggling to gain owners points. Moffitt also has 12 wins, 15th most in series history. From a marketing standpoint, having a former champion and notable winner piloting a truck could help a team secure sponsorship.

Because that’s what Moffitt lacks – sponsorship. Moffitt needs a team with sponsorship. So which teams would be viable options for him?

The top choice would be AM Racing. The team already has sponsorship, but it is searching for the right driver. Primary driver Austin Wayne Self opted to skip a few races, the team fielded a second entry part-time and recently stated in a race preview, “AM Racing is building for its future and will make announcements soon regarding its path for the remainder of the 2022 and 2023 NASCAR seasons.”

In addition, Moffitt already has a relationship with the team, running both events at Knoxville Raceway, albeit finishing with two DNFs due to crashes. Still, Moffitt knows the team. Moreover, the team has proven this year that it has solid equipment. Self himself had two top 10s in the first three races this season and newcomer Max Gutierrez finished eighth in second career Truck start.

If AM Racing wants to stay competitive in an increasingly competitive Truck Series field, it must upgrade its driver. Self’s two top fives and 15 top 10s in 142 Truck starts have proven he is not the best candidate.

Sure, Moffitt has not finished with a top five in Trucks since the 2020 season. But consider this fact: in three full-time Truck seasons, Moffitt finished first, third, and third in the points. In six straight years, he led at least one lap. In three of his last 10 Truck starts, he has started 15th or better. All those statistics are an improvement over Self’s numbers.

Moffitt’s end with GMS Racing was not pretty. But his desire to win the championship and contend for wins was admirable. Given the right opportunity, Moffitt could once again help an organization better itself. Moffitt would add value to mid-pack Truck Series teams and AM Racing would be a good fit for him. – Mark Kristl

Brett Moffitt a Reminder it Takes More Than Talent

Does Moffitt have the talent to be in NASCAR? Absolutely. He proved it during his time in the Truck Series.

But his current situation doesn’t completely stem from a lack of sponsorship.

From 2018 to 2020, Moffitt was a force to be reckoned with in the Truck Series. He won the championship in 2018 with Hattori Racing Enterprises, and he scored the most points of any driver in both 2019 and 2020 at GMS Racing.

But all of that came to a screeching halt in the 2020 finale at Phoenix Raceway. Moffitt dominated and was just three laps away from his second title before the caution came out for Dawson Cram. Moffitt’s team elected to stay out, and he lost the championship after he was swallowed up on the restart by trucks with fresh tires.

Moffitt did not hold back on his criticism of the team after the race.

Heading into the race, it was unknown what Moffitt’s Truck Series plans were for 2021. Sponsorship had been thin at times, as Moffitt’s truck at Bristol Motor Speedway in 2020 was completely blank.

But it didn’t take long for Moffitt and GMS to move on, as it was announced that he would not return for 2021 just one week after Phoenix.

The fact that GMS parted ways with Moffitt almost immediately after Phoenix shows that there was a degree of fallout from his post-race comments and the ending. If the split was purely due to sponsorship, it wouldn’t have happened as suddenly. Moffitt and GMS most likely would have attempted to run it back for the 2021 season given their previous success if that was the case. In addition, Moffitt had run the majority of the Xfinity races with Our Motorsports in 2020 and re-signed with Our in 2021 almost directly after the split with GMS. If sponsorship was a problem in running a full-time season for GMS in 2021, he at least had another ride to fall back on.

After leaving GMS, Moffitt no longer found himself in an elite ride capable of contending for wins. He briefly drove for Niece Motorsports in the Truck Series in 2021 before leaving after six races; in two-and-a-half seasons at Our Motorsports in Xfinity, he was able to compete for top 10s on occasion before getting sidelined this week.

The best way to get sponsors is to put them in victory lane, and the winning came to an end once Moffitt left GMS.

If the caution doesn’t come out at Phoenix, Moffitt would be a two-time champion and, for all we know, could still be racing with the team today. He may also be in consideration for the No. 42 Cup ride that is available in 2023, but the fractured relationship with GMS has certainly seemed to impact that.

If it was strictly off talent, several teams would love to have him as a driver. But Moffitt had time driving for one of the best teams in the Truck garage, and it came to a shocking, sudden end after a bitter defeat. And once a driver is out of an elite ride, it is hard to find another one.  Moffitt certainly has the talent on-track to be successful in NASCAR, but it will take time for him to rise up the NASCAR ladder after the rough end to his GMS tenure.  – Stephen Stumpf