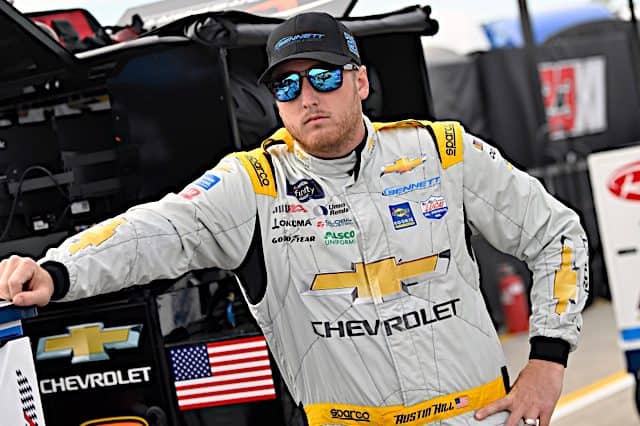 A Ford driver has won the last seven straight NASCAR Cup Series races at Michigan International Speedway. Will that trend continue on Sunday, and if so, who will be the winner?

Anthony Damcott: Among drivers who haven’t won this season, Michigan has been a good track to Ryan Blaney, so I’d look for him to be leading the Blue Oval brigade at some point in the race. Kevin Harvick also has to have this one circled on his calendar — he just won here back in 2020, so he’s recently familiar with victory lane at the track. Aside from maybe Joey Logano, I don’t really see any other Fords winning this race unless someone like Chris Buescher steals the race, which could very well happen. But it’s more likely that Blaney, Harvick and Logano will be the Fords to watch.

Luken Glover: Unfortunately for the Blue Oval, the odds are not in their favor this weekend. The closest track resembling MIS is Auto Club Speedway. In the 2022 edition of that race, Ford wasn’t nonexistent at the front, but it didn’t exactly make a big splash, either. The Hendrick Motorsports cars, Tyler Reddick and even Erik Jones have strong opportunities under the Chevrolet banner. Toyota has boosted its performance on faster tracks this season. Defending winner Blaney is arguably in the best position to win this race, and he very well could. But based on 2022 results, the nod would have to go to Chevrolet.

Mike Neff: While it would seem like the Chevy teams have been a little faster of late, you never count out the Fords at Michigan. Blaney has had terrible luck lately. He needs to win to lock into the playoffs. Nothing would be cooler than to watch him join the list in front of the corporate suits from Deerfield, Mich.

Cole Custer has better NASCAR Xfinity Series statistics — wins, top fives, top 10s — than Cup this year. Should Stewart-Haas Racing demote him back to the Xfinity Series next year?

Neff: Only if there is someone else with a bunch of money behind them who wants to steal his ride. Cole Custer has won at the Cup level and deserves to keep riding that wave until he becomes a liability.

Glover: At 24 years old, the move would still give Custer plenty of time to develop. Riley Herbst has been much improved this season, but he has yet to win in his second year with Stewart-Haas Racing. SHR has struggled as a whole the past two seasons, but Custer has not had the success of his fellow teammates in several areas. With the rumors of Kyle Busch moving to SHR, plus other worthy free agents in the pool, a different look may be the best thing for Custer at this stage.

Damcott: Absolutely. It’s clear Custer is either a Cup bust or was rushed too quickly. Considering he’s been in the premier series since 2014, my opinion leans toward the Cup-bust argument. He has raced in two different generations of Cup cars and has only managed to win once with a team that, while it has struggled recently, isn’t exactly a backmarker team. He has just two top 10s this season, though they both came in the last four races of the season and are his first top 10s since May 2021. However, his Xfinity stats the last few years suggest his talent is just what the Xfinity Series needs. He could easily have himself a great career in the Xfinity Series, much like drivers like Elliott Sadler, Justin Allgaier, Regan Smith and many others. In all sports, athletes peak at a certain level, which is OK in some sports with feeder series such as MLB, NBA or NASCAR. Custer seems to have peaked in the Xfinity Series and should move to SS-Green Light Racing next season with a technical alliance from SHR. It’s a win for all parties involved.

Austin Hill will make his Cup debut at MIS. How important will his performance be for his career trajectory?

Damcott: Austin Hill has suddenly caught fire since being promoted to the Xfinity Series full time. It looked like he was just going to be a career NASCAR Camping World Truck Series driver like Matt Crafton, as he had spent four full-time seasons in the Truck Series and four part-time seasons before that. Sure, he made some Xfinity starts with Hattori Racing Enterprises, but it seemed like Hill was content with being a permanent staple in the Truck Series. Now, this opportunity is a step in the right direction. The start is most likely to help Hill get adjusted to a Cup car, suggesting that he will be the guy to take over Reddick’s No. 8 in 2024. This is also good for Richard Childress Racing to start thinking about its future, and it looks like the team made a great choice signing Hill to its Xfinity program. This is a crucial, but correct, step for Hill’s career, but both he and the team need to be careful and not overstep — that is, both parties can’t get too excited and look to put Hill in a car full time next year. I still believe Hill could use an extra season in Xfinity before being promoted to Cup full time.

Neff: It is just another step. You take experience when you can get it. Hop into a ride any time the opportunity presents itself. If he does well it may open some eyes, although he has already opened most of the eyes he needs to in the sport.

Glover: Hill will certainly have eyes on him this weekend, especially in the RCR camp, but he should not have too much pressure on him. He is only in his first season in the Xfinity Series and is doing a solid job there. While suspicions remain, Reddick will likely be in the No. 8 car for RCR next season. If this is indeed an audition for Hill to replace Reddick in 2024, he has plenty of time. A top 20 this weekend should be the target.

See also
Eyes on Xfinity: 5 Drivers That May Drive for Petty GMS in 2023

Which team, if any, would be a good fit for Brett Moffitt to join this season?

Neff: Brett Moffitt is a good choice for almost any team. The open seat at Petty GMS Motorsports, another Trackhouse Racing Team ride, the No. 18 for Joe Gibbs Racing. He is a champion, and his skills will work for anyone.

Damcott: None. Moffitt’s big issue is attracting sponsors, it seems. Everywhere Moffitt has gone in NASCAR’s top three series has been a short-term opportunity because it seems like he either isn’t marketable enough for sponsors or will not do the work to attract/retain sponsors. HIs interview at the end of the 2020 Truck season pretty much burned his bridges with GMS Racing, which was really the last good shot he had (as well as the longest, driving two full seasons with the team). Every team he joins in the Xfinity or Truck series seems to end because of some sort of sponsorship or financial issue. Given that Moffitt has been jumping from team to team for several years, one has to wonder if there’s any team who would pick him up at this point if sponsorship is an issue that he just can’t shake. Moffitt has also shown that his loyalty is questionable, too. He was supposed to run the full Truck season with Niece Motorsports in 2021, but after just three top 10s in seven Xfinity races, he switched points and left Niece. I’m not sure teams want to take a gamble on a driver who will leave at the drop of a hat for a better opportunity. It’s an unfortunate thing to happen to the 2018 Truck champion, but it seems that he doesn’t have many options, if any.

Glover: It is hard to believe we are talking about Moffitt just four years after overachieving with Hattori to win the 2018 Truck title. Since then, however, it has been all been downhill. After nearly pulling off an upset at Homestead-Miami Speedway in Xfinity a year ago, Moffitt has made little noise at the front since. Big Machine Racing Team would be one option, but it is not much of a step above Our Motorsports. Sam Hunt Racing has made steady progress and could snag Moffitt. Finding a home at this point will be tough, and it is hard to see a clear landing spot for 2023.

Anybody else feel like Noah Gragson would be a better fit at RCR (at least personality wise),.. and Austin Hill at Petty GMS?

I don’t think making Custer the scapegoat for SHR’s struggles does anyone any good.

Agreed – but maybe depends on which Custer a person means. Cole no way, but Joe? He might own a little responsibility on that front.

Custer IS a liability right now. His stats so far this year are rivaling Danica’s 2016 season, just like his year last year was similar to Danica’s 2017. I say let Custer flounder around in 23 and test out Herbst in the 41 in ’24.(if Kyle Busch isn’t in the #41)