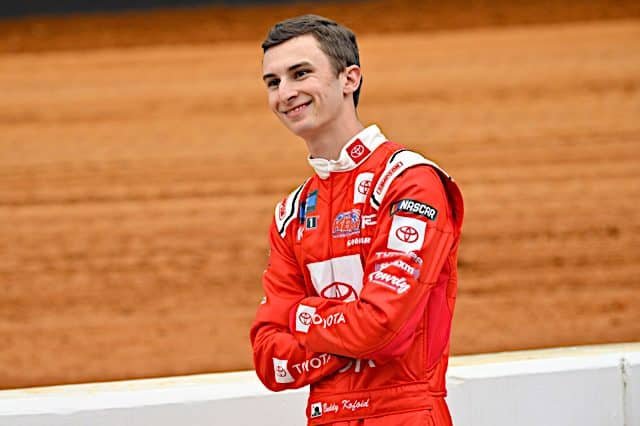 Defending USAC midget national champion Buddy Kofoid continued his title defense with a crown-jewel victory in the BC39 at Indianapolis Motor Speedway.

The closing laps at the Dirt Track at Indianapolis Motor Speedway again proved to be the highlight of the 2022 midget racing season to date, with current USAC points leader Buddy Kofoid prevailing in a lengthy exchange of sliders with Cannon MacIntosh to score the BC39 win, a win the driver deemed the biggest win of his midget career in victory lane.

🏁 @MichaelKofoid rides the wall to the win at @IMS! #BC39 @USACNation

The event, a crown jewel on the midget scene, saw initial race leader Mitchel Moles under heavy fire for the lead from MacIntosh from the drop of the green, with Macintosh taking the lead on lap 13 after two earlier charges got derailed by untimely cautions.

After Moles went tumbling down the backstretch with 10 laps to go, the ensuing restart saw Kofoid throw three consecutive and clean sliders at Macintosh, prevailing for the lead with eight circuits to go. Macintosh returned the favor and would even lead a few more laps, but Kofoid was driving away with four laps to go, then pulled away for good on a lap 37 restart.

NASCAR Cup Series regular Chase Briscoe finished 10th in the B-main and had to take a promoter’s provisional to qualify for the A-main. Briscoe started at the rear and was never a factor, finishing 21st.

NASCAR Xfinity Series regular Sheldon Creed finished eighth in the B-main and failed to qualify for the BC39.

Defending Cup champion (and BC39 champion) Kyle Larson qualified for the A-main and finished fifth, though Larson never challenged for the race lead.

Former Cup regular Ryan Newman couldn’t stay out of trouble in the first D-main, slapping the wall to avoid a lap 1 Big One, then spinning himself out on the ensuing restart and getting collected in Bill Rose’s spin the restart after that. Newman finished 10th and failed to transfer.

Cup regular Ricky Stenhouse Jr. put on a show Thursday night, transferring out of the C-main and then going on a 17th to sixth run in the B-main to earn a spot in the BC39 feature. Stenhouse finished 19th in the main event. You know it’s a good run when Nascarcasm is being serious on Twitter.

Kofoid’s closest competition in the USAC midgets points race, Justin Grant, put on a show of his own Thursday night. Battling from the C-main to make the feature, Grant charged from the rear of the A-main field all the way up to fourth by race’s end, easily earning hard charger honors on the night and continuing a historic streak.

From the C to the B to the A.@JustinGrant40 had a long row to hoe throughout tonight's @Driven2Save #BC39 Pres. By @WeatherTech.

He remains the only driver to finish in the top-10 in all 4 editions of the BC39. pic.twitter.com/6cqFLy3IeQ

After the drama he endured during Indiana Sprint Week, getting back to a solid night on track was just what the doctor ordered for Thomas Meseraull, who finished third in the BC39 feature.

The BC39 feature was not the only part of Thursday’s race program to feature scintillating laps. The battle for the final transfer spot in the second D-main was as good as it gets, with World of Outlaws regular Donny Schatz besting USAC regular Logan Seavey.

🔥 @Logan_Seavey and @DonnySchatz go toe-to-toe for the final transfer position at @IMS! #BC39 @USACNation

Even though he led 12 laps, Moles never appeared to have the car to win the BC39. He was definitely, however, in position to finish far better than he did after flipping late in Thursday’s feature.

🚨 @mitchelmoles01 is okay after a hard hit and flip at @IMS! #BC39 @USACNation

Indianapolis native Tyler Courtney had about as rough a homecoming as they come, spinning out twice in his C-main, getting into the feature via a promoter’s provisional and then spinning himself out during the feature. It’s hard to remember a race in any form of open-wheel racing where Sunshine gave so murky a performance.

Wednesday’s fifth heat race was a scenario I’ve never seen play out in dirt racing before. Despite the heat going green for its entire 10-lap distance, only three of the 10 cars that started the heat finished it.

That is what a midget race is supposed to look like. A crown-jewel event brought about an effort far more representative of a professional racing circuit this Thursday night, with hard racing that didn’t see the field using each other and their racecars up with ill-advised moves that would make a Kamikaze pilot blush. It wasn’t quite the humdinger that last year’s feature was, but Kofoid vs. Macintosh up front was a damn good show in the closing laps.

There’s nothing midget about BC39 ticket prices. World of Outlaws pit passes are cheaper than reserved seats for this event.

Racing has been fun here at @IMS, but coming from a dirt track this here is BS. We paid $55 for our seats and the people next to us had to pay $85.

BC39 Grand Marshal Tony Kanaan took some exhibition laps in a midget between the D and C-mains Thursday night. Boy, did he look the dirt-track rookie … when he pulled the entire stack of helmet tear-offs from his visor in one big clump while being pushed off. In all seriousness, Flo Racing really messed this one up by blasting Autograph instead of track audio while he was on track. It would have been nice to hear how Kanaan was working the throttle.

Watching Kanaan wheel a midget at BC39 was really cool, too bad someone made the decision to play music instead of using the ambient mics 👎🏼

I’ve got to give IMS track president Doug Boles a ton of credit for doing a lap around the track to greet all the feature race starters. There’s a lot of promoters across the country on dirt and asphalt alike that would do well to emulate this behavior.

On behalf of the fans, @jdouglas4 walks to, and thanks, every single driver competing in the @Driven2Save #BC39.

Next up: The Main Event. pic.twitter.com/CN2pKQX58n

On that same note though, as cool as it is to see such a prestigious racetrack take it’s one dirt event of the season as serious as it does, some of the emulation of the races on the big track comes off as gimmicky. I can understand providing a victory wreath in victory lane, but building a fake yard of bricks for dirt racers to kiss is a bridge too far.

Though I’d be entirely in favor of giving dirt-track winners at the facility a bottle of chocolate milk.

Cautions and red flags that slowed the BC39 feature.

Midgets entered for Thursday’s BC39 at Indianapolis.

Where it Rated (on a scale of one to six cans with one a stinker and a six-pack an instant classic): The 2022 BC39 gets four and a half well-chilled Technicolor Dreamcats from Sun King Brewery in Indy. The closing laps of Thursday’s feature were barnburners, and both Grant and Stenhouse put on shows worth noting coming from the back of the field.

A race program with a lot of stoppages for track work and a track that didn’t come around till the final 10-15 laps keep this one from entering rarified air like last year’s edition.

Up Next: The World of Outlaws Late Models heads to Cedar Lake Speedway for the $50,000-to-win USA Nationals. Mike Marlar extended his streak of top-five finishes in super late model racing to 22 Thursday night with a prelim feature win. Coverage will (finally) be available on DirtVision without a pay-per-view charge for those with an annual subscription.

Thanks for writing about this race. I could not find any results reading my regular racing websites.