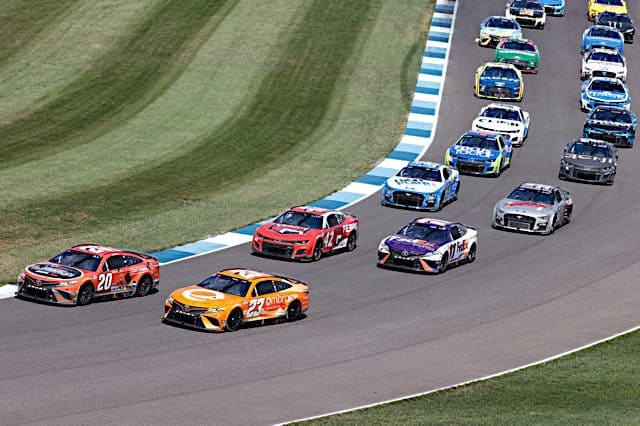 Has Tyler Reddick solidified himself as an elite road racer in the NASCAR Cup Series?

With dominating near-wins at Auto Club Speedway and the Bristol Motor Speedway dirt track at the beginning of the year, it would seem weird at the start of the season to think that Tyler Reddick‘s first two Cup wins would come on road courses. But here we are.

Reddick has a force on the twisties in 2022. He started off the season by running top five all day before finishing fifth at Circuit of the Americas in March. Reddick’s race at Sonoma Raceway has been the lone outlier of the season so far, as he finished 35th after a midrace crash. He then followed up that disappointment with back-to-back road course wins at Road America and the Indianapolis Motor Speedway road course.

At Road America, he straight-up passed and defeated a dominant Chase Elliott for his maiden Cup victory. At Indianapolis, he won the pole, led the most laps and held off all challenges in overtime for the second win of his career.

So has Reddick established himself as a favorite on road courses for the foreseeable future?

If last Sunday was any indication, absolutely. He is already tied with Elliott for the second-most road-course wins since the start of 2021 with two, only trailing Kyle Larson‘s three.

Nevertheless, Reddick is now one of the heavy favorites to win road course races until he proves otherwise.

The decision to penalize Ross Chastain for using the access road at Indianapolis proved controversial. How can NASCAR address this problem for the future?

Ross Chastain made the highlight reels in his effort to win at Indianapolis. He restarted fourth in overtime, and after running out of room heading into turn 1, he elected to use the access road in order to prevent a crash. He came out of the access road with the lead and crossed the line in second, but NASCAR deemed Chastain’s move worthy of a penalty; he was credited with a 27th-place finish.

The penalty was questionable because there were no rules set in place for someone using the access road, and it ultimately stemmed from a judgment call.

Despite this, Chastain used the access road as a shortcut. When he aborted his attempt to make the first turn, he was running fifth. He rejoined the field in the lead. The penalty most likely was handed out because Chastain used the access road to advance his position. In a similar vein, NASCAR’s yellow line rule at Daytona International Speedway, Atlanta Motor Speedway and Talladega Superspeedway states that drivers cannot go below the line to advance their position. Chastain’s ruling was a judgment call, and one that may have gone the other way if he rejoined the field in fifth place or further back.

However, NASCAR also made a mistake in not handing out the penalty immediately. Because Chastain was ruled ineligible for the win, his presence on the track impacted the outcome of the finish, as the No. 1 car created a buffer between Reddick and the second-place finisher, Austin Cindric. If Chastain wasn’t there, would Cindric have had a chance at passing Reddick? We’ll never know.

To prevent a situation like this from happening again, NASCAR should institute a uniform rule that a driver cannot use the access road to advance their position. That would prevent anyone from using the access road from gaining an unfair advantage, and it would also prevent drivers from having their days ruined by being forced off the track.

Had Chastain used the access road and rejoined the race in fifth or sixth, it would have been perfectly fine. But because he used it to take the lead, he should have been penalized immediately.

How can NASCAR prevent crash-fest finishes like Indianapolis from happening in the future?

NASCAR’s weekend at the IMS road course was shaping up to be a tame one. The NASCAR Xfinity Series race had only two cautions for incidents, and with six laps to go, the only caution for incident in the Cup race was for a bizarre crash between Larson and Ty Dillon.

That all came to an end when Christopher Bell shredded a tire while running in the top 10. The caution was brought out and the field was set up for a three-lap shootout.

And on said restart, drivers threw caution to the wind and all common sense went out the window.

The field went five-wide into turn 1, and as expected, a half dozen cars went spinning through the grass in three separate incidents through the first few turns.

The caution was out again, and the final overtime restart didn’t go much better. The field was only four-wide heading into turn 1 this time, and Chastain elected to take the access road to prevent a collision. In turn 2, AJ Allmendinger got into the back of Ryan Blaney while running in the top five, and Blaney went spinning in front of the field before the leaders reached turn 3.

We’ve seen this story countless times at superspeedways like Daytona and Talladega. When presented with just a handful of laps to win the race, drivers will become overly aggressive and make moves they otherwise wouldn’t have made when the trophy is on the line. The frequent result is numerous wrecked race cars and multiple overtimes.

This used to be primarily limited to superspeedways, but the same types of chaotic finishes are becoming commonplace at all types of tracks.

The solution? Single-file restarts in the final 10 laps of a race.

In the double-file restart at Indianapolis with three to go, the field went five-wide into the first turn. If the same restart was single file instead, the drivers would be entering the turn three-wide at most, as there would be fewer cars packed together in the field. Running five-wide in this scenario would essentially be impossible.

But just how effective would single-file restarts be? Just look at last year’s Cup race on dirt at Bristol for an example. Midway through the race, drivers were unable to stop crashing while running side-by-side on restarts. NASCAR then made the executive decision to go to single-file restarts for the remainder of the race, and there were no issues on restarts for the remainder of the event.

Double-file restarts can be used to put on a show for fans throughout the first 95% of race, but when everything is on the line for a race win, single-restarts should be used until the field stops producing ugly finishes like the one at Indianapolis.

Is Kyle Larson having a championship hangover?

Credit to Larson’s dominant 2021 season, because you know the expectations are high when being fifth in points with a win is considered a rough season.

The struggles for Larson continued at Indianapolis on his 30th birthday, as his day ended after a bizarre and frightening crash with Dillon on lap 61. Both drivers walked away from the crash unscathed.

Larson was already three laps down from previous crash damage in the race, and it appeared that the No. 5 had suffered a brake failure as he barreled into the turn before taking out Dillon. However, Hendrick Motorsports revealed that there was nothing mechanically wrong with the brakes later in the week. The SMT data from Larson’s crash was later leaked online, and it revealed that Larson was briefly off the brakes and was heading too fast into the corner. He then stepped on the throttle at the last moment to avoid crashing into Dillon’s car to no avail.

Whether Larson’s foot slipped off the brake or Larson tried pumping the brakes after they didn’t slow the car down fast enough will remain unknown, but it adds another bizarre and disappointing ending to a race in his title defense.

Road America was one of Larson’s best races of the season outside of his lone win at Auto Club Speedway, as he finished third and had an average running position of fourth. But those races have been few and far between for Larson this season, and he has just 18 laps led in the last six races.

Fortunately for Larson, there is time for him and the No. 5 team to turn their slow start around. There are 14 races left in the season, and with tracks like Darlington Raceway, Bristol, Kansas Speedway and Homestead-Miami Speedway still on the schedule, Larson will still have plenty of winning chances.

But the team is still far off from recapturing the dominance it had in 2021, and there are just four races left to right the ship before the playoffs begin in September.

I like your idea of single file restarts with 10 to go. Not only will it help the chaos on restarts, but it will get rid of some of the late race caution debates that have gone on all year. Now the bigger question: what’s does TV think should happen? Because the rest of us are only along for the ride.

Considering that’s exactly what the brain trust at NASCAR (as governed by their TV overlords) wants, I’d suggest the question is moot.

Actual Racing Fans would rather see NA$CAR handle road course and street courses like Indycar and F1 do; start of the race double file is fine. You get one big, dramatic crash to start the race. After that, all restarts are single file because, well, we gotta log laps under green to finish the race today.

Due to the open wheel nature of Indy / F1, there is a certain amount of self-policing due to car design/vulnerabilities on how much a driver will force an issue. With NA$CAR, there is nothing to force much self control for the driver. They know they can be sandwiched between 4 cars, bend every corner, and still be able to race. So there is nothing to prevent them (short of a wall, huge curbs, spike strips, or landmines) from being stupid and trying to stuff 8 cars into a space only wide enough for 2.

Wait till next season. Indy Road Course, “We have the most exciting wreck fest.” Chicago Street Course, “Hold my beer!”

Local Winged Sprint Car tracks in PA have the answer to help reduce wreck fest on restarts
The restart cone
Brings the cars down the straight two wide into the turn
Cone pulled when cars pass
Any car hitting cone or rope, pass through penalty or worse stop and go