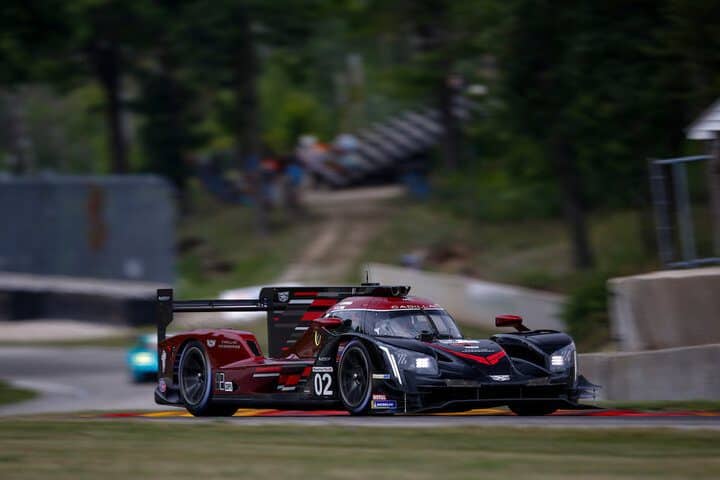 Chip Ganassi Racing’s Alex Lynn was fastest overall in IMSA WeatherTech SportsCar Championship practice Friday (Aug. 5) at Road America with a lap at 133.303 mph.  For comparison purposes, this lap was a little more than four seconds slower than the best lap in practice during the INDYCAR weekend back in June.

In the early afternoon practice session, there was quite a bit of activity on track.  During the session, there were two red flags.  The first occurred 49 minutes in when VasserSullivan’s Jack Hawksworth stalled on course in Canada Corner.  A few minutes after the session resumed, High Class Racing’s Dennis Andersen crashed exiting the Kink, a scary proposition.  Luckily, Andersen was able to drive his ORECA 07-Gibson back to the pits, but not before the red was displayed again.

At the beginning of the session, PR1 Mathaisen Motorsports’ Steven Thomas and Malthe Jakobsen collided at turn 8.  Thomas slid off and stopped briefly, but was able to resume.

The Cadillacs were quick at the very beginning of the session.  Action Express Racing’s Pipo Derani was quick early, then Chip Ganassi Racing’s Earl Bamber went to the top.  However, Wayne Taylor Racing’s Ricky Taylor turned in a lap at 131.834 mph to top the session.

Taylor’s lap was three-tenths of a second faster than Bamber.  Derani was third fastest, then Meyer Shank Racing with Curb-Agajanian’s Tom Blomqvist.  Sebastien Bourdais was fifth.

In LMP2, Era Motorsport’s Ryan Dalziel was fastest with a lap at 129.944 mph, good for seventh overall and less than two-tenths of a second slower than the DPi of JDC-Miller MotorSports’ Tristan Vautier.  Dalziel’s lap was .732 seconds faster than Tristan Nunez in the No. 11 PR1 Mathiasen Motorsports entry.  DragonSpeed’s Juan Pablo Montoya was third fastest, then Tower Motorsport’s Louis Deletraz and Nunez’s teammate Josh Pierson.

Despite the issues at the very beginning of the session, Jakobsen ended up fastest in LMP3 with a lap at 120.997 mph, 13th overall.  Jakobsen was three-tenths of a second faster than Riley Motorsports’ Felipe Fraga.  Scott Andrews was third in JDC-Miller Motorsports’ new Duqueine No. 90.  MLT Motorsports’ Dakota Dickerson was fourth, while CORE autosport’s Colin Braun was fifth.

CarBahn Motorsports with Peregrine Racing’s Robert Megennis was fastest in not just GTD, but of all the GT drivers with a lap at 115.322 mph, good for 22nd overall.  Megennis’ lap was .071 seconds faster than NTe Sport’s Jaden Conwright.  VasserSullivan’s Frankie Montecalvo was third, while Turner Motorsport’s Robby Foley was fourth.  Winward Racing’s Russell Ward was fifth.

Finally, GTD Pro was led by BMW M Team RLL’s Connor de Phillippi with a lap at 115.075 mph, 25th overall and fourth fastest of the GT runners.  De Phillippi’s lap was one-third of a second faster than VasserSullivan’s No. 14 Lexus for Ben Barnicoat.  Corvette Racing’s Antonio Garcia was third, while Pfaff Motorsports’ Matt Campbell was fourth.

The afternoon practice session was originally scheduled for 105 minutes.  However, that was extended to two full hours due to a 32-minute red flag midway through the session.  This was due to the curbing on the outside of turn 1 breaking up.  Since turn 1 is a quick turn and drivers often swing out there, it was a safety hazard that had to be taken care of.

Lynn’s lap was a quarter of a second faster than Bourdais.  Albuquerque ended up third quickest, then Oliver Jarvis in the Meyer Shank Acura and Olivier Pla.

Dalziel was quickest again in LMP2 with a lap at 129.399 mph, a little slower than in the first session.  He was .326 seconds quicker than Montoya.  Deletraz was third fastest, then Nunez and High Class Racing’s Fabio Scherer.

Andretti Autosport’s Gabby Chaves was fastest in LMP3 with a lap at 121.401 mph, 13th overall.  Chaves’ lap was .482 seconds quicker than Andrews.  Sean Creech Motorsports’ Joao Barbosa was third in class, followed by Fraga and Braun.

Unfortunately, Andrews’ car stalled on course at the Kink to bring out the session’s second and final red flag.  Given that this occurred right at the end of the portion of the session where everyone was eligible to be on track, it would not be out of the question that this was simply Andrews running out of fuel, but it still isn’t the best way to end a session.

In GTD Pro, Hawksworth was fastest in class and of all the GT teams with a lap at 115.687 mph.  Hawksworth was .686 seconds faster than Campbell.  De Phillippi was third fastest, followed by Garcia.

Hawksworth’s teammate Montecalvo was fastest in GTD, just seven-thousandths of a second slower than Hawksworth and second of GT runners.  Montecalvo was .857 seconds quicker than the Acura of Rick Ware Racing’s Aidan Read.  Ward was third, then the BMW of Paul Miller Racing’s Madison Snow.  WeatherTech Racing’s Daniel Juncadella was fifth.

Qualifying for the IMSA Fastlane SportsCar Weekend event is scheduled for Noon ET Saturday.  The session will be streamed live starting at 11:55 a.m. ET at IMSA.com.