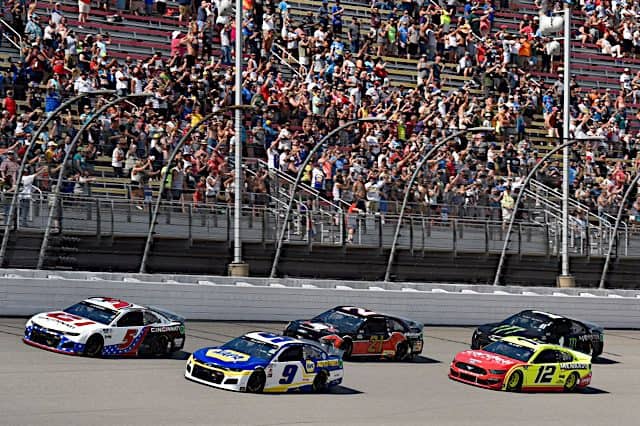 The 2-mile racetrack sits in the Irish Hills area of Michigan and has produced some fairly good racing in recent years. Last year, William Byron led late until a caution came out for some rain, and when the race restarted, Ryan Blaney was able to slingshot into the lead, holding off challenges from other drivers.

Lately, the winner here has come from 12th or better, except Kurt Busch in 2015 and Kevin Harvick in 2020 (the second race of the doubleheader). Ford has claimed the past seven races, with Harvick taking four of them.

So when you build your DraftKings player pool, you’ll likely want to choose drivers who start well, as the winner earns the most DraftKings points (not counting bonuses for position differential, fastest laps or laps led). Be sure to also check out Saturday’s practice and qualifying results (12;35 p.m. ET, streaming on NBC Sports app).

Finally, the Next Gen car has run at several different track types this year, so you can examine the results from some races such as Auto Club Speedway (another 2-mile track) and Kansas Speedway (1.5 miles in length). Keep in mind, though, that Auto Club has more tire wear than Michigan and was run earlier in the year. Drivers and teams have probably adjusted to the car since then.

Before I share my DraftKings picks for Michigan, here’s what happened to last week’s drivers at the Indianapolis Motor Speedway road course.

Chase Elliott was running near the front late until he got spun, resulting in a lower score on DraftKings. Also, Harvick had a rough day at Indy, getting spun twice and eventually retiring early. But rookies Austin Cindric and Todd Gilliland scored top-five finishes, which helped their fantasy totals and boosted this roster over the finish line.

This lineup cashed the large multi-entry $1 double up, but not the $6,000 Quarter Jukebox tournament. In that contest, the top score was 291.4 and won $300 with race winner Tyler Reddick, Cindric, Michael McDowell, Bubba Wallace, Harrison Burton and Gilliland.

Kyle Larson has an interesting history at Michigan; he won three straight races (Aug. 2016 and both in 2017). Then, in his last two events there, he finished third (2019 and 2021, leading 70 laps in the latter event). Most of his experience at MIS was with Chip Ganassi Racing, so it will be interesting to see how he’ll perform in the Next Gen car with Hendrick Motorsports.

Although Larson crashed out in a big way last week at the Indy road course, DraftKings still placed him as the second-most expensive driver. But even with that high price tag, Larson should run as well as he had on some other intermediate racetracks.

At Pocono Raceway, he placed fifth after leading 18 laps. Plus, at Charlotte Motor Speedway, Larson drove from 36th to ninth in May after being out front for 51 circuits. At Kansas, he led 29 laps en route to second place.

Did I mention that Auto Club Speedway was where Larson earned his lone win of the season so far? If he can have a fast car and avoid problems, expect the reigning Cup champion to score well on DraftKings.

Christopher Bell is a little bit pricey considering he’s only finished in the teens at Michigan throughout his career. Still, two of those were 13th places after he started further back in the pack, boosting his DraftKings score.

This season hasn’t been all that bad for the No. 20 Joe Gibbs Racing driver. His fourth place at Pocono helped to increase his fantasy total to 47 on DraftKings. Also, Bell earned his first win of the season at New Hampshire Motor Speedway, scoring 72.1 DraftKings points as a result. Additionally, he was fifth at both Kansas and Charlotte, fellow intermediate tracks that compare to Michigan.

Can the Toyotas find speed at this 2-mile course? If you think Bell can, put him in your roster.

I know I’m starting to sound like a broken record at this point, but hear me out. Michigan is one of Harvick’s best racetracks in recent years, as he’s won the most races of any active driver. He led 92 and 90 laps in each of the 2020 doubleheader races en route to victory. He also was out front for 108 circuits in 2018, winning that one, too. Harvick’s so good that he’s only finished outside the top 10 four times since 2013.

Unfortunately, one of those was last season when he placed 14th. And I know the No. 4 Stewart-Haas Racing pilot’s struggled a lot this year, including the past two Cup races. But Harvick’s still shown some flashes of good results, like a fifth place at New Hampshire Motor Speedway and a third at Charlotte. He also went from 32nd to seventh at Auto Club.

Michigan just might be the place where Harvick grabs his first victory in nearly two years.

It’s probably rare to use two Toyota drivers in the same lineup at a track where Toyotas haven’t won in a while. But Bubba Wallace has shown some speed and determination lately, so I couldn’t ignore him.

Wallace currently has the best active top-10 streak, earning two top fives at New Hampshire and Indy and an eighth at Pocono. Also, the 23XI Racing driver went from 30th to 12th at Nashville Superspeedway. And at Kansas in May, Wallace gained 14 spots to place 10th.

A ninth place at Michigan in 2020 is all the more reason to bank on Wallace this week. The No. 23 Toyota team will do what it takes to get up front.

Unlike Wallace, Austin Dillon struggled for much of July, finishing 23rd or worse in four of the last five events. But I believe Michigan is a place where the No. 3 Richard Childress Racing team can turn it around.

Yes, he didn’t finish well last year, but was running in the top 10 through stage two. Dillon may have just fought a bit too hard with Brad Keselowski at the time, as he ended up crashing hard shortly after they crossed the line to end that stage. However, Dillon does have five top 10s at this track, including an eighth in 2020 and a seventh in August 2017.

This season, Dillon advanced from 21st to 13th at Kansas, 29th to 15th at the World Wide Technology Raceway at Gateway and 20th to 14th at Nashville. Hopefully, Dillon will have another result in the mid-to-upper teens at this price.

Ricky Stenhouse Jr. has similar results as Wallace, both this year and at Michigan. His lone top 10 was an eighth in 2017. However, he finished 12th at MIS last season and drove from 32nd to 19th in 2020.

Plus, last week he gained 25 positions to end the Indy race 13th, his best finish since the end of May. In that Coca-Cola 600, another intermediate track, Stenhouse finished seventh after starting 29th. And at Kansas, he went from 36th to eighth, part of a four-race top-10 streak.

Stenhouse could help you fit two dominators in your lineup in case you need them to win big on DraftKings.