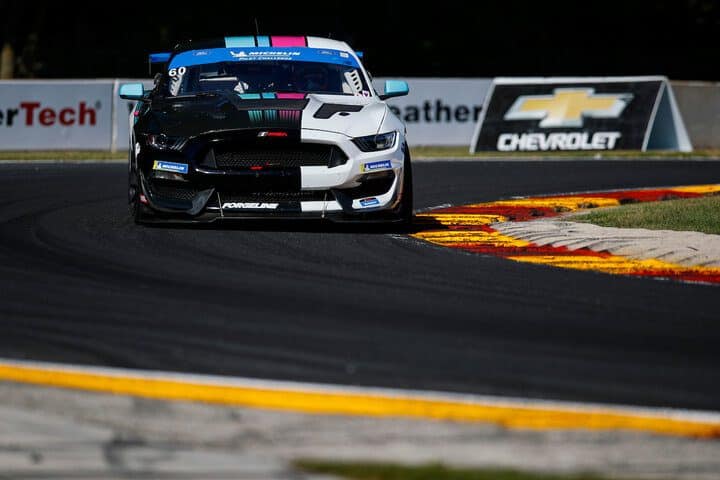 In the opening practice session Thursday afternoon, the best times were set at the very beginning of the 60-minute session.  Kelly-Moss Road & Race’s Alec Udell set a lap at 106.502 mph nine minutes into the session on his second lap at speed.  That lap held up to be the quickest of the session.

Robby Foley in the second Turner BMW was sixth fastest with Murillo Racing’s Christian Szymczak close behind.  Rebel Rock Racing’s Robin Liddell, fresh off of a victory at Lime Rock, was eighth fastest, then BGB Motorsports’ Spencer Pumpelly.  NOLAsport’s Jason Hart rounded out the top 10 in his Porsche.

In TCR, Road Shagger Racing’s Jon Morley was fastest in his Audi with a lap at 103.689 mph, good for 23rd overall.  Morley’s lap was .286 seconds faster than Belgard & Techniseal Racing’s No. 15 Audi with Denis Dupont driving.  VGRT’s Karl Wittmer was third in the fastest Honda, followed by HART’s Chad Gilsinger.  Van der Steur Racing’s Tyler Gonzalez had the best Hyundai in fifth.  The quickest Hyundai Elantra N TCR was Ryan Norman in seventh.

The entry list for the race has been cut down to 39 teams.  Rennsport One has chosen to withdraw the No. 28 Porsche that was supposed to be shared by Stevan McAleer and Alexandre Premat.

Teams were met with cooler weather for the second practice session Friday morning.  That said, the warming temperatures meant that a lot of the best times of the session were set in the opening 15 minutes.  Of that group, Pumpelly was fastest.

However, Mars came back out in the closing minutes of the session and set the fastest lap of the weekend with a little more than seven minutes to go.  Mars’ lap ended up being .129 seconds faster than Pumpelly’s lap in the opening 10 minutes.  Foley was third, then Billy Johnson in the second KohR Motorsports Ford.  CarBahn Motorsports with Peregrine Racing’s Tyler McQuarrie was fifth.

Auberlen was sixth fastest, then McCann Racing’s Andrew Davis.  TeamTGM’s Matt Plumb was eighth in his Porsche, while Camilo and Szymczak were ninth and 10th, respectively.

In TCR, VGRT’s Wittmer was fastest in class with a lap at 103.504 mph, good for 26th overall.  The lap was slower than Morley’s quick lap on Thursday, but quicker than Wittmer’s best time in the first session.

Qualifying for the IMSA Michelin Pilot Challenge Road America 240 is scheduled for 9 a.m. ET Saturday morning (8 a.m. CT).  We will have a recap of the session here at Frontstretch for your pleasure.