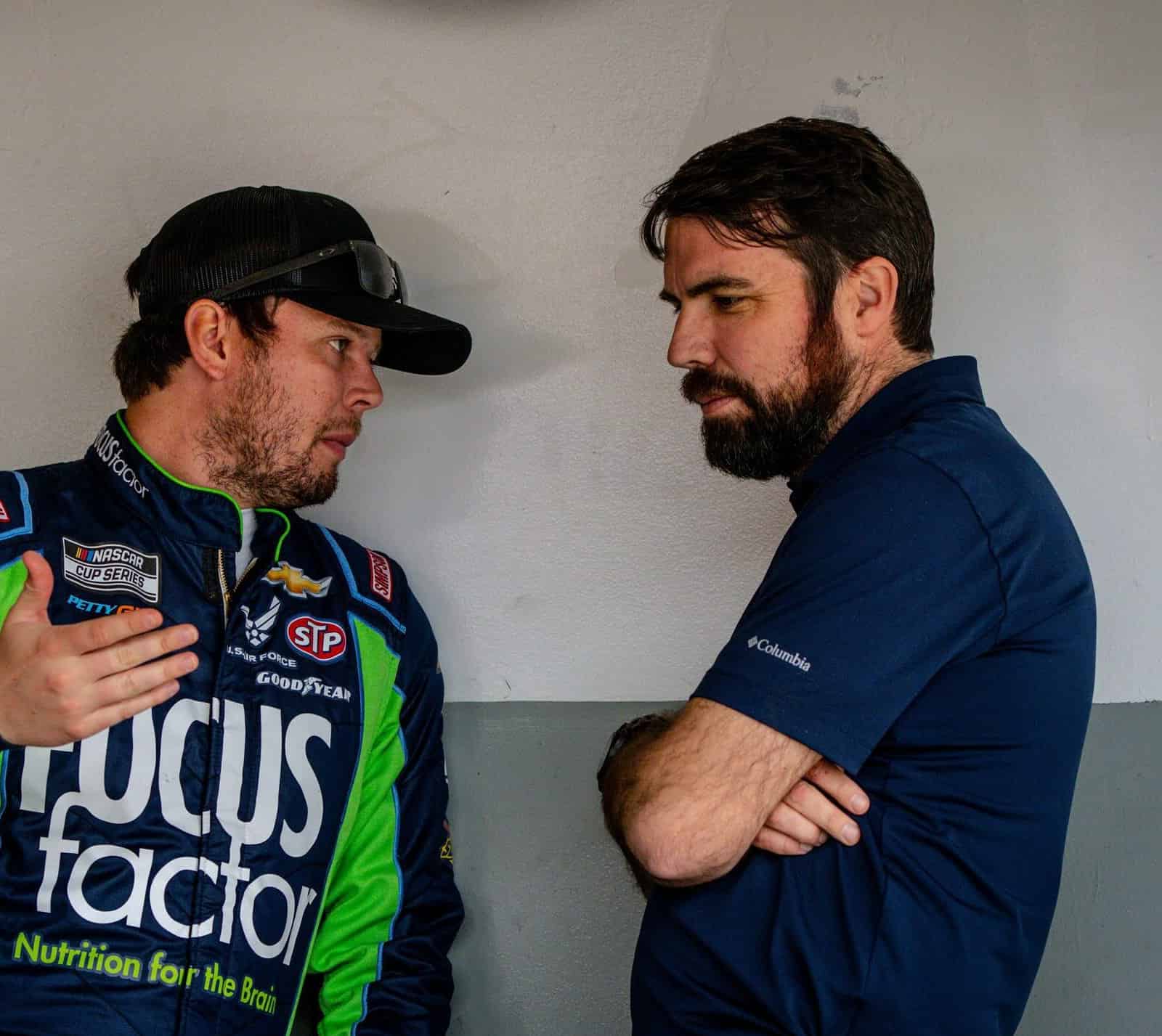 Growing up in Gaylord, Michigan in the late ’80s and early ’90s, Dave Elenz was the odd-man out in his family when it came to NASCAR fandom.

“My family was all Bill Elliott because Melling Tools is right from down there (in Jackson, Michigan), my cousin actually worked in Melling,” Elenz told Frontstretch last weekend at Indianapolis Motor Speedway.

In the days where he remembers frequently falling asleep in the grandstands during the long 400-mile Michigan races, he threw his hat into the ring of “The King,” Richard Petty.

“Wasn’t the best move in 1989,” Elenz said, noting Petty was far removed from his glory days. “He could be a little slow when I started following him.”

Flash forward three decades. Elenz now stands in the hauler of the No. 43 Chevrolet

The 41-year-old is 21 races – after being ejected from Pocono Raceway for an inspection failure – into his tenure as crew chief of The King’s No. 43 Chevrolet, now driven by Erik Jones for Petty GMS Motorsports.

“I don’t know that it really led to my choice,” Elenz says of whether his past fandom influenced his career choices. “Working with Erik, Chevrolet’s happy with this group. That’s all stuff that excited me. It’s just kind of neat that it’s with Richard.”

No, if there was one overriding puzzle piece that resulted in the decision by Elenz to leave JR Motorsports after seven years and two titles there as a crew chief, it was the car he would be working with in 2022.

“I had been waiting on the Next Gen,” Elenz said. “Just because I was so far off on the other car, like the 550 package and all that stuff, I wasn’t going to be usable on the car side to that.

“Waiting on the Next Gen car to come opens up a place like Petty GMS, because they have all the same components,” Elenz said. “We don’t have to start an engineering department and design department and start machining components for two years before we get anything that could compete. We can go buy it … So that for sure was why I wanted to come right now.”

Over the years Elenz had “said ‘no’ to people” about other chances to be a Cup crew chief as he waited for the right opportunity.

He added that it wasn’t difficult for him to turn the offers down.

“(JR Motorsports) was a pretty good gig,” Elenz said. “They won a lot of races, championships. That’s still fun, it’s not the top level, but it was a good place to hang out.”

While he was waiting on the Next Gen car, Elenz was also waiting for the right driver to work with.

“Working with a good driver helps everything,” Elenz observed.

A native of Byron, Michigan, almost 190 miles south of Gaylord, the 26-year-old Jones is in the midst of his sixth full-time Cup season and his second driving the No. 43.

Home field advantage for the Michigan natives this weekend 👌 pic.twitter.com/eYefVxMI25

Similar to Elenz, Jones had been strategic in his career path in the years after losing his ride at Joe Gibbs Racing following the 2020 season.

“The last few years I’ve been just working year-to-year deals and not unintentionally,” Jones told Frontstretch at Indianapolis. “I was kind of doing it on purpose just to see where things were gonna end up and what opportunities were going to be around.”

That “wait-and-see” approach, combined with Jones and Elenz producing the best season for the No. 43 since 2014 with two top fives and seven top 10s so far, resulted in Petty GMS announcing last weekend it had re-signed Jones to a multi-year extension.

“Coming over to Petty GMS felt like the happiest I’ve been in a while here and felt comfortable with what the program was trying to build and do and wanted to stay for multiple years and was happy we could get that done,” Jones said.

How does Elenz assess the dynamic between him and his driver, two Michigan natives separated by a generation?

“He’s quiet, doesn’t speak. And he’s nice,” Elenz said. “I’m a little loud. Bit of a jerk. .. He’s definitely on the reserved side. And definitely, probably more on the aggressive side (when the race starts).”

Elenz laid out how Petty GMS’ rapid formation entering the 2022 season, combined with the challenges of the Next Gen car, somewhat stunted his and Jones’ ability to form a solid link.

“The first part of the season for us, we had so much to do, getting Petty with GMS and building these new cars and getting people in,” Elenz said. “There wasn’t any time for us to really get to know each other, we’d show up at the racetrack and that was a time we got to know each other.”

Over the past three months, the duo has been able to work together on a more consistent basis, with simulator time and meetings.

After three-quarters of a season together, Elenz jokes that Jones “speaks a little more now. He’ll give me some credit back.”

Together, Jones and Elenz head to their home track in Central Michigan this weekend feeling positive about their chances at a win Sunday (Aug. 7) in the FireKeepers Casino 400.

Back in February, Jones led 18 laps and finished third in the Cup race on the 2-mile Auto Club Speedway, the sister track of MIS.

It was the closest the No. 43 has been to a win on a non-superspeedway track – after leading laps –  since John Andretti led 51 laps and finished second at Bristol Motor Speedway in 2001.

Michigan would seem to be a prime possibility for the team to get a win.

“I feel like we should have speed there,” Elenz said. “But our mile-and-a-half program kind of struggled there for a little bit. And I was getting less excited about it until we went to Pocono last week because we didn’t have the speed that we had earlier in the year.”

In races at intermediate tracks this year where Jones didn’t wreck out, the No. 43 finished 32nd at Kansas Speedway (after a bizarre issue with a wheel on pit road), 14th at Charlotte Motor Speedway and 11th at Nashville Superspeedway.

“We definitely came out of the gate really good and kind of leveled off a little bit,” Elenz said. “But after our performance at Pocono. I’m really excited about going back to Michigan. Same deal we had at Fontana, we should have a lot of speed. Fun race to call with a lot strategy.”

Michigan has a much newer surface to Auto Club’s, which hasn’t been repaved since the track opened in 1997. That will be a key part of the strategy Elenz anticipates on Sunday.

“I mean it makes it easier, right? Because we have internal stops that limit travel on (the car) and it’s really hard to stay off of them and get the aero attitude right,” Elenz said. “Fontana was really difficult to do. We had all those blown tires on the left rear. … So Michigan’s going to be a little easier to get it trimmed out, get the aero attitude that you want. And it’s definitely going to be way more strategy: two tires, fuel only, and I really enjoy that part of it.”

If it works out, Jones and Elenz could pull off a trio of firsts.

They’d also earn the No. 43 its first non-superspeedway win since John Andretti’s victory at Martinsville Speedway in 1999.

And Jones could become the first Michigan native to win a Cup race at the 2-mile oval.

“You always want to run good when you go home and I think we looked at tracks left (in the regular season) and that’s one of the ones we feel like we can win at,” Jones said. “Want to take advantage of both of those things.”

I wouldn’t mind seeing Erik win Michigan. In fact I think it would be neat, a feel good story.