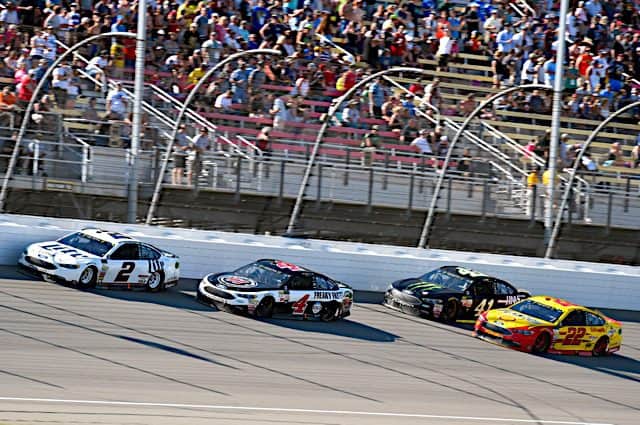 In fairness, NASCAR racing in Michigan actually takes place a little over an hour from the Motor City itself, which lies on the Detroit River that bridges Lake Huron and Lake St. Clair.

Michigan International Speedway is close to Brooklyn, Mich., in the Irish Hills of the state. But it did make for a cool and appropriate headline, given what’s going on there this weekend.

As KISS said in their 1976 classic “Detroit Rock City,” off the album Destroyer:

That’s exactly what we’ll see from the fans. Some of the song applies a bit less, lyrics like “oh my God, no time to turn,” the fact that they’re on an oval instead of I-95 and “I got to laugh ’cause I know I’m gonna die” (let’s hope not), but I digress.

Michigan is primarily significant when it comes to manufacturers. Drivers, sure, but the importance of anyone winning at MIS is especially tied to the history of nearby Detroit, the centerpiece of automotive history in the United States. The headquarters of both General Motors (manufacturers of Chevrolet) and Ford are located there as well, and the talking point of car-make pride is a hot topic whenever NASCAR visits town.

See also
Denny Hamlin: The Most Interesting Man in NASCAR?

The most important stat anyone needs to know heading into this weekend’s FireKeepers Casino 400 at the 2-mile track is that Ford has won the past seven races. This could all change with the Next Gen and the streak could be snapped, but Kevin Harvick has won four of those, including three straight from 2019-’20 and, within that, back-to-back triumphs in a weekend sweep in 2020.

Most recently, Ryan Blaney won last year amid a tear toward the playoffs in which the No. 12 team made it all the way to the Round of 8. He only led eight laps, but those were the final eight en route to the win.

Will the Blue Ovals make it eight in a row?

Historically, Harvick would be the guy to do it. He’s got five wins to his name at the track, but he’s still looking for his first win of the year and first in almost two full trips around the sun. His Stewart-Haas Racing teammates have either little experience (Cole Custer, Chase Briscoe) or don’t typically do well there (Aric Almirola).

Joey Logano leads his Team Penske stablemates with three wins at the track, while Blaney follows with one and Austin Cindric has yet to make his first start at MIS.

Overall, the hungriest guy in terms of a lack of performance in 2022 and lack of Michigan wins overall is probably Brad Keselowski. A whopping zero wins in his longtime manufacturer’s backyard — he’s still with Ford, even if he’s not running near the front every week with RFK Racing — and dismal season this year might be the right mix for him to play strategy and score a desperation win. RFK teammate Chris Buescher has run 11 races and finished eight inside the top 20, but weirdly half of those are exact 20th-place finishes.

Most of the drivers who excelled — or even won at all — at Michigan are long retired, however.

Cale Yarborough was the first, winning two of the initial three Michigan races and eight overall, while David Pearson followed (and then one-upped) Yarborough with nine victories of his own.

More recently, since the turn of the century, it’s a little more all over the place. There’s wins by Sterling Marlin, Jeremy Mayfield, Brian Vickers, Clint Bowyer and a later-years Mark Martin, all since 2000, while more famously Dale Earnhardt Jr. snapped a winless streak that began after Michigan in 2008 with a win at Michigan in 2012.

Outside of that, Denny Hamlin has a couple wins, Kurt Busch a couple, Kyle Busch one … there’s very few preeminent winners at Michigan remaining in the field.

See also
5 Points to Ponder: Will the Grass Be Any Greener Than it is Now for Tyler Reddick?

The biggest threat to Ford is likely the No. 5 of Kyle Larson, even if he hasn’t won in the Irish Hills in five years. Larson reeled off three straight triumphs from the second 2016 race to the second 2017 race and looked unstoppable at the 2-mile oval, but since then finished outside the top 10 three straight times … but then rebounded, finishing third in 2019’s second event and third in 2021’s lone running (he didn’t run in 2020 due to his suspension and ride loss).

That all said, this might be prime time for him to return to victory lane there. He won Auto Club Speedway this year, which he did in 2017 before sweeping the Michigan races, and showed a ton of speed on that 2-mile track. Fellow Chevrolet driver Tyler Reddick is on a roll, is coming off a win at the Indianapolis Motor Speedway road course and was arguably en route to a win in the Auto Club race before tire issues ruined his day, so the No. 8 could also pose a threat to the Fords.

Whatever the case, the Next Gen has also shifted the outlook for Michigan even further into opacity. We don’t know who the contenders will be, much less how the race will unfold. This weekend should be fun.

AH – no worries for chevy fans, hendricknascar has tweaked the aero and horsepower packages in your favor ! Congrats in advance !

Ok, then let’s get Larson a win as we near the playoffs.