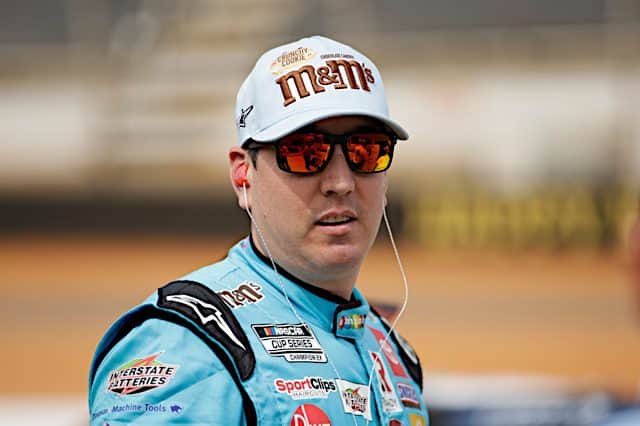 BROOKLYN, Mich. – Kyle Busch and his son Brexton were standing in line for a ride at the Mall of America in Bloomington, Minnesota, on Thursday (Aug. 4) when Busch’s wife, Samantha, called his phone with an urgent message.

“There’s an active shooter and shots have been fired in the mall.”

In an instant, Busch and his son went from being the next in line to enjoy a ride at America’s largest mall to spending the next five to six minutes experiencing the “chaos” of a shooting scare.

The Joe Gibbs Racing driver was briefly captured on video Thursday navigating the mall with Brexton in tow as he talked with Samantha on the phone.

At the time, with their “heads on swivels,” Busch had “no idea” where they were in relation to the threat.

“There was definitely a sense of danger,” Busch recounted Saturday (Aug. 6) at Michigan International Speedway. “At that point, active shooter or somebody shooting at another person, whatever shots being fired, you don’t know. So that’s the scariest part is you have no idea what is happening. So I’m asking (Samantha), ‘Where are you? What store is it coming from? What level are you on?’

Samantha was able to exit the mall first and then helped guide her husband and son out of the calamity and to the safety of the parking lot.

“Fortunately it was close to the exit that we were parked,” Busch said. “So we could just get in our car and venture around and go pick her up from the exit that she exited out of which was on the other side.”

Two days after the incident, in which no one was harmed, police are still searching for suspects.

Busch observed, “there’s many other people that unfortunately go through that stuff,  apparently on the daily.”

He said Samantha has received “a ton of messages” from people with examples of similar scares.

In the aftermath of what Busch experienced at the Mall of America, he said that it was “hard to explain” to his 7-year-old son the reality of what transpired and “the severity of (what) it could have been.

“He’s to the age right now where in those situations, I don’t even think Samantha would let him be on his own until he was 13 or 14 years old anyway,” Busch said. “So he’s always going to have a parent or guardian or something around him for a long time. So all of us have to be mindful in those situations. As to what the best way to do go through that is, I don’t know that we really had the perfect course of it. But we made it through with the best of our information at that point.”

He’ll be ready for Chicago.

The wife loves attention and couldn’t wait to go on social media! Unreal, making it about her (always) it seems to me. Always.