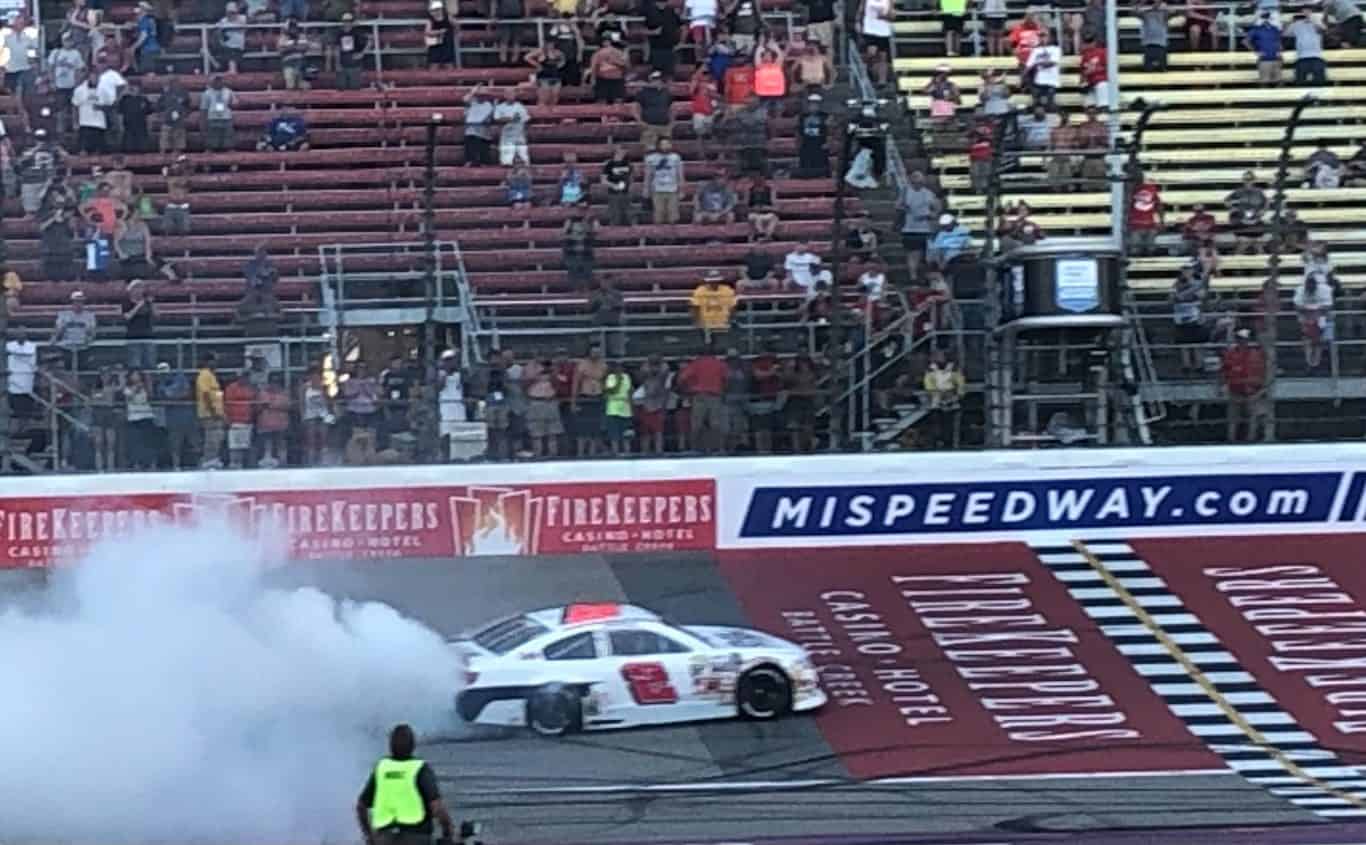 Nick Sanchez entered the weekend second in the standings, but with his third ARCA Menards Series win of the season Saturday (Aug. 6) in the Henry Ford Health 200 at Michigan International Speedway, the Rev Racing driver has seized the championship lead.

Sanchez didn’t have the fastest car, but a combination of strong restarts and inch-perfect defensive driving let the 21-year-old claim the fourth ARCA Menards Series win of his young career, all of which have come on speedways 1.5 miles or longer.

“It was all defense,” Sanchez told MAVTV from the frontstretch. “My team brought me a fast car, but it wasn’t the fastest one, so we had to capitalize on restarts like we always do … we did not have the speed to win this race, we took it away from them.”

Corey Heim recovered from late-race contact with the wall to finish second in the No. 20 Venturini Motorsports entry, with Daniel Dye, Sammy Smith and Gus Dean rounding out the top five.

Rajah Caruth drops to second in the standings with a sixth-place run, while Bret Holmes, Cody Coughlin, Greg Van Alst and Morgen Baird completed the top 10, the only 10 cars to finish on the lead lap.

Heim started the race from pole and stretched out a commanding lead in the early laps. While series points leader Caruth and second-place Sanchez started up front, championship contender Dye had to start from the rear after a flat tire in qualifying. He was joined at the back of the grid by Sammy Smith, who gave up a front-row starting spot with unapproved repairs.

A power move on the start saw Heim open up a commanding gap on the rest of the field, leaving Holmes, Sanchez and Caruth battling for second.

Lap 25 saw the afternoon’s first caution. Manitoba, Canada’s Amber Balcaen hit hard on the entrance to turn 1 and scraped along the wall before coming to rest in turn 2.

The 30-year-old rookie was running in the top 10 at the time of the crash.

🟡 Caution 🟡@amberbalcaen10 gets into the wall to bring out the first yellow at @MISpeedway @MAVTV | @FloRacing pic.twitter.com/BrF1joy6VO

Heim’s crushing performance in the opening stint proved all for naught, as the No. 20 crew struggled to take off the right front tire under the first race break. The slow stop, under ARCA’s modified live pit rules, forced the race leader to return to the pits a lap later to change left-side tires, and restart from the back of the field.

Two laps later, Heim was back in the top five.

A push on the restart from Caruth gave Sanchez the lead for the first time. He fiercely defended that position for 25 laps, holding off first Smith and then Heim with a combination of blocking, side drafting and lapped traffic.

This battle for the lead >>>@MAVTV | @FloRacing pic.twitter.com/HoQP33hLaP

Eventually, Heim got past, overdriving turn 2 on lap 63, letting Sanchez take the bottom, then driving away off the exit of turn 4.

The second scheduled race break came with a competition caution on lap 70, only the second yellow flag of the evening.

Sanchez pushed Smith into the lead on the lap 77 restart, then in turn 3 the Rev Racing driver grabbed the top spot for himself.

But he couldn’t hold Heim off for too much longer.

On lap 86, the caution waved for the final time, for Scott Melton‘s crash on the frontstretch. The yellow set up a 10-lap dash to the finish, with Heim restarting ahead of Sanchez, Dye and Smith.

Once again, a strong push cleared the two cars on the inside into turn 1. Sanchez led Dye off the corner, while Heim got tight, bouncing the No. 20 off the wall and dropping outside the top five.

While Sanchez fended off Dye for the final 10 laps, Heim made an unlikely charge back through the leaders, dealing with Dye before setting his sights on Sanchez.

It came down to the penultimate corner of the white-flag lap, and Heim just wasn’t close enough. He washed up the track on exit, letting Dye to his inside and allowing Sanchez to vanish into the sunset.

Eight races remain in the ARCA Menards Series championship and the series moves next to Watkins Glen International for the General Tire Delivers 200, Friday, Aug. 19 at 6 p.m. ET on FS1.