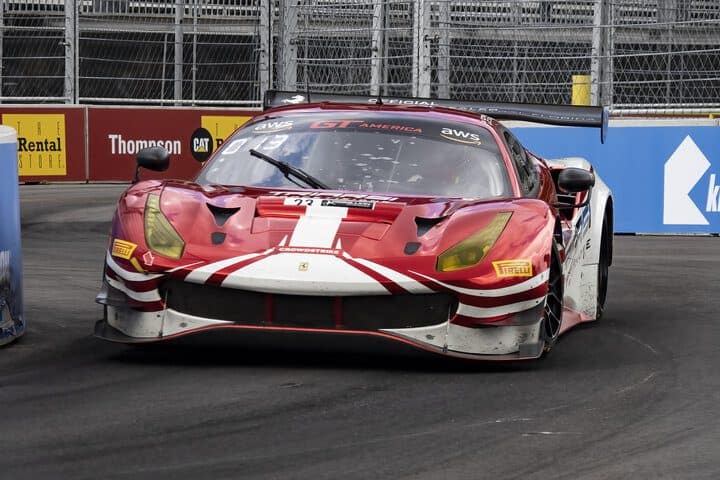 Triarsi Competizione’s Onofrio Triarsi, making his GT America Powered by AWS debut in the Ferrari 488 GT3 that he normally races in Fanatec GT World Challenge America Powered by AWS, led flag-to-flag to win Race No. 1 on the Nashville Street Circuit Saturday evening (Aug. 6). The victory is Triarsi’s first overall victory in any of the series under the SRO America banner.

“It was exciting from the start,” Triarsi told SRO America’s Amanda Busick after the race. “I just had to manage the traffic out there and stay safe; we brought home a great result.”

Triarsi started from the pole in his Ferrari 488 GT3 and wasted no time opening up a decent gap over the rest of the field. Triarsi’s teammate Justin Wetherill started in second, but Jason Daskalos was able to use lapped traffic to barge his way into second.

Just before the halfway point, Wetherill was able to get Daskalos back at turn 4 after the first crossing of the Korean Veterans Bridge. By that point, Triarsi had pulled out to a five-second lead.

The race was by no means clean. DXDT Racing’s Scott Smithson was running fourth early on when he went too fast into turn 9, the 90-degree left after the second crossing of the bridge. Smithson slid his Mercedes-AMG GT4 into the tire wall. He was able to back up and get back underway, but he did lose a position in the process.

The race’s sole full course caution came out just after the halfway point when SMOOGE Racing’s Todd Coleman hit the wall exiting turn 10 at pit-in. Coleman’s Toyota GR Supra GT4 was significantly damaged and had to be removed from the circuit.

The green came back out with a little more than 13 minutes to go. Triarsi was able to open up a small lead and settle in. Meanwhile, the battle for second between Wetherill and Daskalos was back on. Daskalos was able to get past in turn 8, but Wetherill was able to use the straight-line advantage of the Ferrari to retake second.

Behind Wetherill and Daskalos was another battle for fourth between Crowdstrike Racing with Riley Motorsports’ George Kurtz, Smithson and Zelus Motorsports’ Jason Harward. Kurtz and Smithson started battling hard for the spot and slowed each other down, allowing Harward into the mix.

Harward tried to make a lunge to the inside at turn 11 late in the race, but came in way too fast. The result was that Harward slid into the end of the tire barrier. He was able to continue, but dropped back to seventh.

Triarsi was able to hold on to take the victory without any issues. He ended up 2.424 seconds ahead of Wetherill at the finish, completing a Triarsi Competizione 1-2 finish. Daskalos was third, then Kurtz and Smithson.

In GT4, Rotek Racing’s Robb Holland started from pole in his Porsche Cayman GT4 RS CS. Once the race started, he simply drove away from the pack. Chouest-Povoledo Racing’s Ross Chouest gave chase in his Aston Martin, but he had to deal with Edgar Lau in Rotek Racing’s Ford Mustang GT4.

Holland lost a six-second lead over Chouest when the mid-race safety car period came out, but he was able to open it back up right after the restart. Holland ultimately went unchallenged en route to his first win of the year.

Holland’s margin of victory was 3.249 seconds over Chouest. Lau was third, then Premier Racing’s Adam Adelson in his Porsche.  GMG Racing’s Jason Bell was fifth.

Race No. 2 for GT America Powered by AWS teams is scheduled for 11:55 a.m. ET Sunday morning. Coverage of the race is scheduled to start at 11:45 a.m. on the GT World YouTube channel.