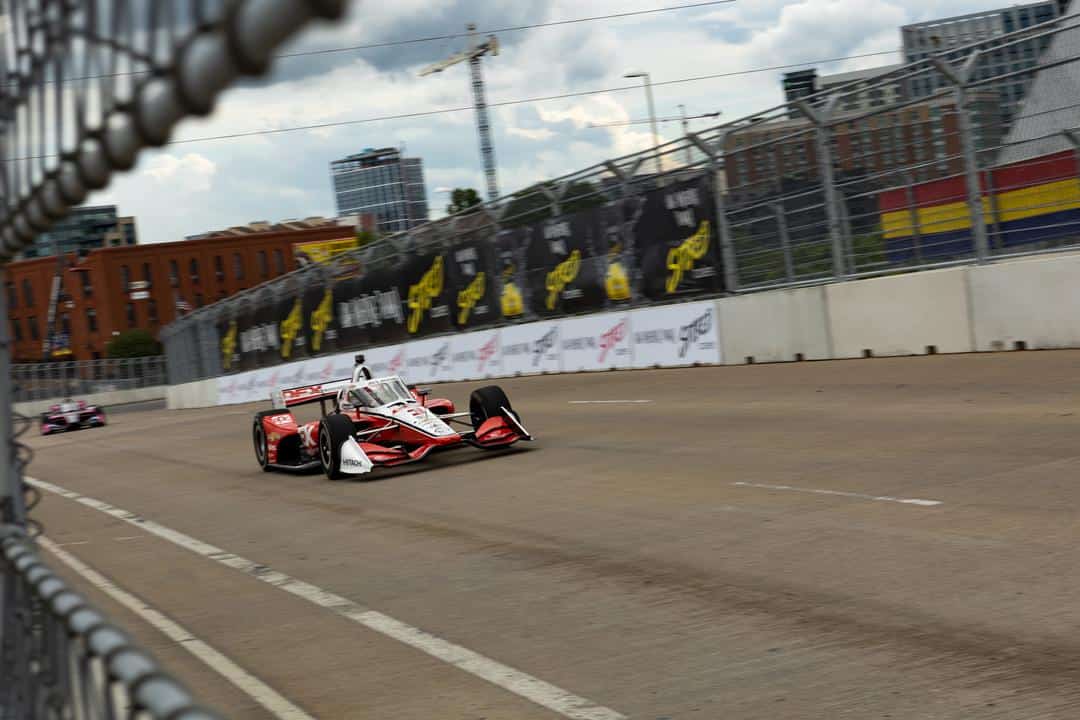 McLaughlin will share the front row with Andretti Autosport’s Romain Grosjean, while Christian Lungaard and Alex Palou will line up third and fourth for Sunday’s race.

“The car was phenomenal,” McLaughlin said.

“To do that on one-lap used tires, that was our fastest lap of the qualifying session I think. Oh man, just one of those good laps.”

Tire wear weighed on the minds of all teams as the weather-delayed qualifying session progressed. Firestone’s new guayule alternate tires were quickly mauled by the course’s abrasive surface through the first two sessions, with their lifespan extending slightly through the Fast 12 and Fast Six outings.

Teams are expected to start on the alternate tires tomorrow and pit for the black walled Firestone Primary tires early in the race.

Round One Group One

Qualifying for the first group of round one was put on hold as quickly as it began when Devlin DeFrancesco’s Andretti Autosport Honda came to a stop in turn 4, triggering a red flag and ensuring the Canadian rookie would not advance past round one.

With barely a minute remaining, Colton Herta, who dominated last year’s race, locked up under braking for turn 4, planting his No. 26 Honda in the tire barrier, triggering the second red flag of the session. Herta was 0.207 seconds up on the cutoff time at the moment he crashed out.

“That was just a little bit too ambitious for what the conditions were,” Herta told NBC’s Dave Burns after the accident. “Just trying to find the right braking point and I overdid it… it was really an honest mistake.”

The large amount of time spent under caution limited the number of flying laps drivers were able to lay down, meaning A.J. Foyt Racing’s Dalton Kellett was able to sneak out of round one and make his first career appearance in the Firestone Fast 12.

Eliminated from group one were:

Round One Group Two

Group two’s session played out in a much cleaner manner, with no on-track incidents, nor any yellow or red flags. However, Chip Ganassi Racing teammates Marcus Ericsson and Scott Dixon failed to put up lap times sufficient to advance to the Firestone Fast 12.

Dixon has now missed the Fast 12 in the last four races.

Eliminated from group two were:

Heartbreak struck championship leader Will Power in the form of a penalty for causing a local yellow.

The Australian was in position to advance to the Firestone Fast Six when he overshot the entrance to turn 1, having to spin his No. 12 Chevrolet around in the escape road and causing a local yellow flag with Pato O’Ward approaching the scene.

As a result, Power lost his fastest lap time, leaving him eighth fastest in the session, while O’Ward was able to advance to the Fast Six.

Eliminated from the Fast 12 were:

The most consequential session of the day played out in the calmest manner, with the most alarming on track incident being a series of heavy lockups from Lundgaard. Both Josef Newgarden and Palou made late charges at the Kiwi’s pole time, but ultimately came up short.

The Big Machine Music City Grand Prix will air on Sunday, August 7, at 3:00 p.m. ET with coverage on NBC.