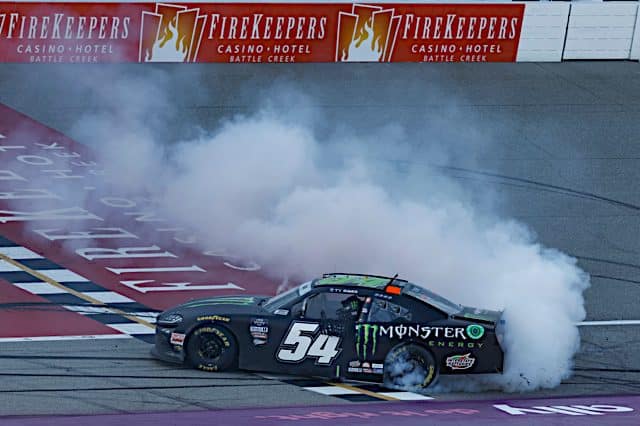 It was all about pit strategy for the No. 54 Joe Gibbs Racing driver, as he won the race off pit road just before the end of stage two while others stayed out. As the pit stops cycled through, Gibbs was able to get back into the lead and win his fifth NXS race of the year.

“We had a very fast Monster Energy Toyota GR Supra,” Gibbs said after the race. “I’m so excited… I feel like this style of racing shows the strategy and the pit stops. It was pretty spread out. My guys did a great job, my pit crew, I workout with them during the week and I see how hard they work…

“It depends on how you look at it, I just race week in, week out, but people can get all excited and think they’re making a huge statement, then they go into the playoffs and suck. I’m just doing what I can week in and week out.”

No steering wheel needed for this burnout. RETWEET to congratulate @TyGibbs_ on getting his NINTH @NASCAR_Xfinity Series win. pic.twitter.com/cc7RaChGrN

Justin Allgaier finished second after having a slower stop in stage two, coming out behind Gibbs. Polesitter Noah Gragson was third after sweeping stages one and two, Brandon Jones was fourth and Austin Hill rounded out the top five.

There were a couple of cautions for incidents during the event, both in stage two.

First, on lap 41, CJ McLaughlin slammed the outside wall hard; Matt Mills, who was a few cars behind McLaughlin, got on his brakes, spun around and also hit the wall.

Later on the caution came out again for David Starr, who spun off of turn 2 after some contact from Dillon Bassett.

This set up a two-lap shootout for stage two between Allmendinger, Cassill and Gragson. Allgaier was leading prior to the caution but pitted, allowing those three to battle for the stage win. Cassill at first held the bottom lane for about a lap but got too loose and fell back. The No. 9 closed in on Allmendinger and edged out the No. 16 to win stage two, sweeping both stages.

Gragson and Allmendinger hoped there would be another caution after they pitted so they could once again battle for the lead.

But no more cautions for incidents came for the rest of the race, allowing Gibbs to lead 54 laps en route to the victory in the Irish Hills.

Ryan Sieg currently holds a lead of just over 50 points over Sheldon Creed for the last spot in the playoffs with five races left in the regular season.

The Xfinity Series travels to Watkins Glen International in two weeks for some road-course racing. It will air on Aug. 20 at 3 p.m. ET on USA Network.