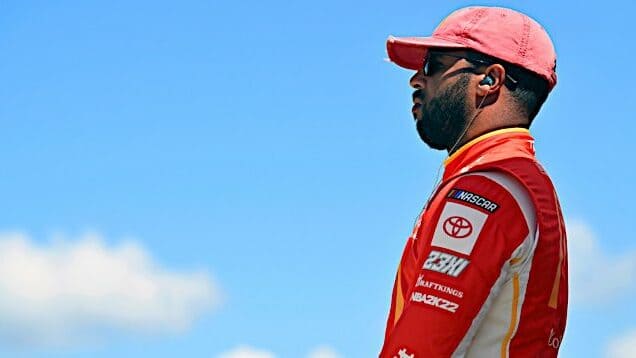 A few minutes after he finished second in Sunday’s (Aug. 7) NASCAR Cup Series race at Michigan International Speedway, Wallace did not exit his racecar.

As Kevin Harvick celebrated ending his 65-race winless streak on the frontstretch, Wallace sat in his No. 23 Toyota on pit road, his helmet on and the safety net still up.

Roughly a minute after he came to a stop, Wallace let the net down. For another 20 seconds, he sat still, staring straight ahead.

Finally, the 23XI Racing driver pulled himself out of the car and began removing his racing gear. When he was done, Wallace briefly leaned against his car and stared out toward the grandstands before kneeling down to further collect himself.

Once he was done, Wallace began the slow circuit of talking to TV reporters, receiving encouragement and congrats from crew members and team owner Denny Hamlin, who finished third.

What did Hamlin tell him?

“Great job, great job all weekend,” he said. “[Wallace] and his team did a great job … the whole team continues to get better and we’re happy with the results.”

Wallace then disappeared over the pit wall and into victory lane to congratulate Harvick on his win.

“Bubba and I have a great relationship,” Harvick said. “We talk and joke and pick. I could tell he was a little bit frustrated because he knew how fast his car was today … there’s great respect there and we have conversations a lot. It’s fun to see them running good, but I’d much rather win, though.”

When he reappeared over the wall, it was time for more interviews to discuss his career-best fourth consecutive top-10 finish and his third top five in the last four races.

But after starting from his first career Cup pole and leading a career-best 23 laps to start the 400-lap race, none of that mattered.

“I finished second,” Wallace said. “Second doesn’t get you into the playoffs.”

With Harvick’s win, there’s now just one spot left in the postseason field open to a potential first-time winner or someone getting in on points.

On Saturday, Wallace had recounted a story from a tire test earlier this year. It had gone so well, Wallace had told his team he’d be “very pissed off” if he didn’t win at the 2-mile track.

Instead, he finished 2.9 seconds back from a potential second career Cup win.

“Way worse than Daytona. Daytona, we fell into that one,” said Wallace, referring to the season-opening race when he lost to Austin Cindric by .036 seconds in a car that was missing its right-front fender.

“This one, we had the car,” Wallace explained. “Got behind a little bit on adjustments in the middle of the race. I didn’t think we were going to get back up there. It’s so hard to pass. The aero on these cars is nuts. Had to grind and stay hungry and get us up there. The next thing you know, it kind of fell our way.”

With 41 laps to go, a wreck between Ross Chastain and Christopher Bell reset the field for a 35-lap run to the finish.

During the ensuing caution, Hamlin beat Wallace to the exit of pit road and would’ve been second on the restart after Harvick stayed out since he had pit right before the caution. However, a pit penalty against Hamlin meant Wallace would restart second instead. He had arguably the best car and his best chance at a win.

How did he fail to cash in?

“I made the wrong choice on the restart,” Wallace said. “The No. 1 rule here, not the No. 1, but near the top, is to not race side-by-side for too long to let people get away, especially the leader.”

But that’s what happened.

Once the race resumed, Harvick was able to run away to a roughly four-second lead as Wallace, Joey Logano and Kyle Larson battled desperately for second.

That battle ended after just one lap when Logano got into the side of Wallace and forced him to cut off Larson as they exited turn 2.

Larson quickly dropped to ninth and Wallace was now stuck behind Logano’s much slower No. 22.

“If we were able to clear him in that moment, maybe we could have made a run,” Wallace said. “But stayed too long behind Logano.”

He didn’t get by the No. 22 Ford until there were 17 laps to go, and by then Harvick was long gone.

Even with his disappointment, Wallace acknowledged his 10th career top five was a “hell of a result.

“It’s a great weekend for us. There’s a ton of positives,” Wallace explained. “The only negative was that we didn’t win. … We had speed, we had the car. The team’s pumped up. Confidence is still continuing to grow … We go into Richmond (next weekend) with momentum still on our side. I’m just bummed we didn’t win the race.”

Did any of the words of congratulations and encouragement given to him in the last few minutes mean anything?

“Deep down, it does,” Wallace said. “I have enough voices of my own in my head telling me no less.”

With that, Wallace was escorted back toward the garage, through a series of conflicting external voices.

On Wallace’s right was a chain link fence with a string of fans behind it.

Multiple fans called out his name in encouragement or gave him a thumbs up.

One yelled, “Hey Bubba, see you in Chicago, baby!”

He got two calls of “Good race, Bubba!”

In the midst of it all, one fan wearing Wallace gear imparted some words that gave his run some personal stakes.

“This day was super important to me. Thank you!”

Wallace, acknowledging the positive voices and seeming to ignore the rest, walked on.

See also
Up to Speed: 23XI Racing on the NASCAR Playoff Brink

apparently Trackhouse’s is awful as well

Darrell Wallace was complaining about a competitor “racing him”. Post race BS noted…Shocking! Not really. SMH.

Denise is teaching him to whine.

That’s one of the reasons he fits in so well at Reverend Joe’s whine and cheese parties.

You are a career average 20th – 25th place driver, Bubba, even after millions of dollars were invested in building a team just for you. Check the standings! Being in the Playoffs regularly may come with a little more seat time and experience, but last year you “rain shortened” your way in and this year you won’t.

It would help if he didn’t have incidents out of his control happen in 15 of 23 races this year. He would likely be around the Playoff cutline or in on points(if we didn’t have 15 winners)

The prior years excuses were that he “just didn’t have the good enough equipment to compete”. Now, it’s because there were 15 mistakes by other people as the reason he is not in the Chase? OK, got it!

(While he had a terrible run at Richmond there was also another pit crew penalty there as well)
Feel free to watch all of these on Youtube. I might’ve gotten a few positions wrong but all the incidents happened. Not saying Bubba is a title contender, he is nowhere close. But this season, he has been a 12-15th place driver who, along with Kurt, has had awful luck, mostly huge wrecks happening right in front of him as well as plenty of crew errors. Look how the performance has turned around since the crew swap. He has the best average finish in Cup at 6.0 over the last 5 races.

Ummm… he wasn’t in the chase last year, his win came after the chase started… nice try, though… it’s good to see the hate coursing through your body

He might need antidepressant drugs to compensate for his delusions of grandeur. A gushing fountain of emotion.

He hears voices in his head. NASCAR, give him a checkup from the neck up.

Maybe they needed to do a check up on Bobby Isaac as well.

Such disappointingly personal negativity. One wonders what triggers it?

He has struggled with depression in the past(at the start of his Cup career maybe?) so I think it’s likely that the emotions of being so close to a huge win plus a slight depression “relapse” cause him to sometimes overreact after being so close? IDK, I’m not a doctor, but if he hadn’t gone through serious depression a few years ago I think we likely wouldn’t see this much emotion out of him. Just my 2 cents.

I mean yeah, I would call P2 close. Was the margin of victory close? No. But he knows if he executes that restart better, with the long run speed they had, he likely runs Harvick down. He was slightly closing on him in the last 5 laps.

Bubba should have caressed the wall with the right rear. That would have made his car fast enough to catch Harvick.

Maybe he hasn’t picked up on that yet. Not surprising!