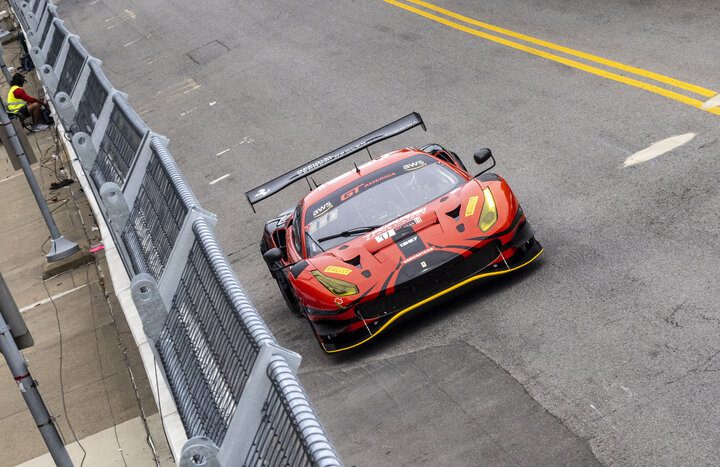 “It was all about being consistent,” Wetherill told SRO America’s Amanda Busick after the race. “Fortunately, we had a little bit of a gap [over the rest of the field] and it allowed me to push a little bit harder.”

After his victory on Saturday evening, Triarsi started from the pole and was able to outdistance his teammate Wetherill with ease. Within a couple of laps, Triarsi had a couple of seconds on his teammate.

Unlike Saturday, that lead slowly eroded. Just after halfway, Wetherill was able to run down Triarsi and take the overall lead in his own Ferrari. Further back, the man on the move was Mirco Schultis in the only Callaway Corvette C7/GT3 in the field. Schultis started eighth and quickly made his way up to fourth.

By halfway, he had run down the Audi of Jason Daskalos for third. A battle broke out between the two drivers of vintage GT3 equipment. After a few laps, Schultis was able to make the move work as Daskalos was struggling with a steering issue. Crowdstrike Racing with Riley Motorsports’ George Kurtz followed past into fourth.

This battle was nearly 20 seconds behind Wetherill. The end of the race got interesting as the Triarsi Competizione teammates caught a group of slower GT4 cars. That gave Triarsi a chance to get the lead back and sweep the weekend, but Wetherill was able to hold on for the win.

Wetherill’s margin of victory was just .342 seconds over Triarsi. Schultis finished third for his best run of the year. Kurtz was fourth, while Daskalos was fifth.

In GT4, Saturday’s winner Robb Holland claimed the pole and set off into the lead. However, there was trouble behind.

The crash and resulting stackup resulted in GMG Racing’s Jason Bell moving up to second. Holland was able to move out to a five-second lead in the early laps before Bell began slowly reeling him in.

Further back, Holland’s Rotek Racing teammate Edgar Lau ended up in a battle with Cagnazzi. Lau was in front until the duo ran up on the slower BMW of SRQ Motorsports’ Rick Uhler. Uhler held up Lau just enough that Cagnazzi was able to make an aggressive move to take third in turn 4.

Cagnazzi continued to show his pace by running down Bell and taking second as well. At the time, he was four seconds behind Holland with a little more than five minutes to go and he was the fastest GT4 driver on the track. Unfortunately for Cagnazzi, he simply ran out of time as Holland held on to take the weekend sweep.

Holland’s margin of victory was 1.589 seconds over Cagnazzi, who ultimately got back to where he started by the finish. Bell was third, followed by Lau. Due to the positioning of the overall leaders, Premier Racing’s Adam Adelson ended up a lap down in fifth.