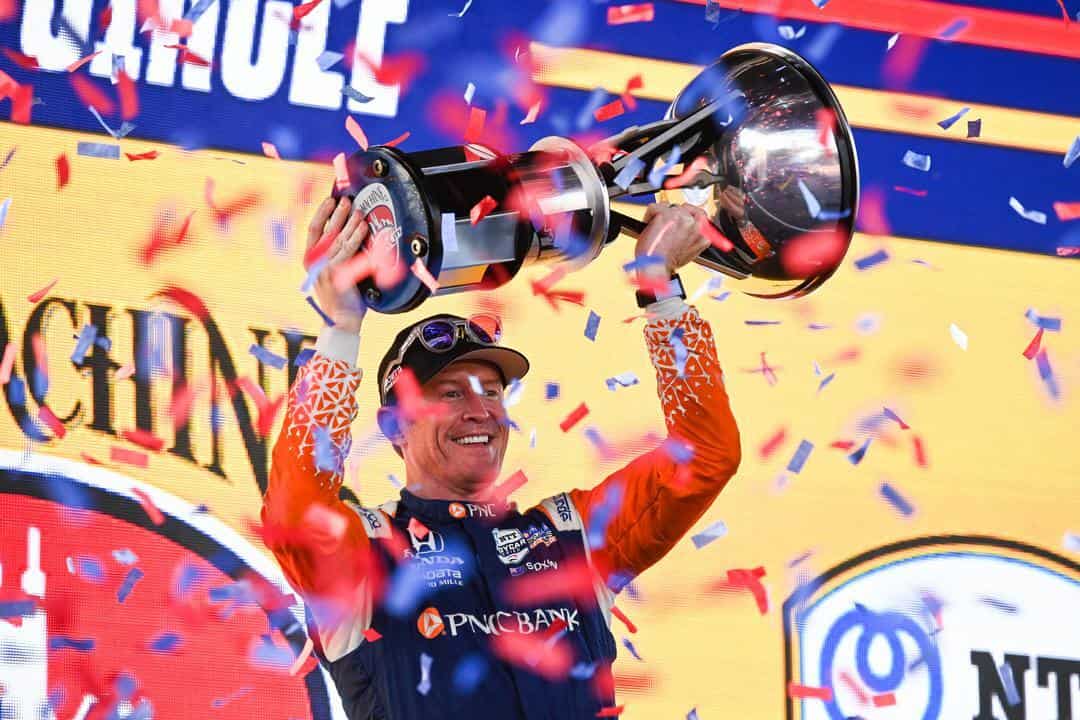 The NTT IndyCar Series Big Machine Music City Grand Prix was a wreck fest for the second year in a row, but don’t tell that to Scott Dixon.

The six-time IndyCar champion cruised past the drama from the back of the pack and won the 80-lap event Sunday (Aug. 7) on the 2.17-mile circuit on the streets of downtown Nashville to score his 53rd IndyCar series win to catapult him past Andretti to second on the all-time win list. AJ Foyt remains the king with 67 victories.

Record: Shattered.@scottdixon9 wins the #MusicCityGP for his 53rd career #INDYCAR win and surpasses @MarioAndretti for the 2nd most wins in series history. pic.twitter.com/MLsVs03zSV

However, Dixon did more than just make history. After collecting his second win of the season behind the wheel of his No. 9 PNC Bank Chip Ganassi Racing Honda, he has pulled within six points of the championship lead with just three races remaining. Only one driver has won more championships than the New Zealand native—and reminiscent of the all-time win list—it’s the same man, Foyt, who has seven titles under his belt.

Polesitter Scott McLaughlin, who nudged Dixon at the line, finished second in the No. 3 DEX Imaging Team Penske Chevrolet. It was the fourth-closest margin of victory in IndyCar series road-course history at .1067 seconds.

Although race organizers attempted to improve the quality of the racing, chaos once again ruled for much of the event.

Dixon, who started 14th, suffered early damage to his left-rear wheel and subsequently made six trips to pit lane to repair the discrepancies. However, Dixon was not to be denied, despite eight caution flags and a late red flag that punctuated a dramatic sophomore appearance on the narrow street course.

Following the sixth caution 15 laps from the finish, Dixon was the beneficiary as the pit lane shuffle moved him to the front of the pack. From there, Dixon used his decades-long experience to bring home the checkered flag that has him smelling a record-tying seventh NTT IndyCar Series championship.

Hometown favorite and two-time series champion Josef Newgarden finished sixth. He led 12 laps before he was forced to pit for fresh rubber on lap 65.

Although Newgarden was impressive with his moves on the track, he also brought out the eighth and final caution of the day when he sent Andretti Autosport’s Romain Grosjean into the wall. Grosjean, no stranger to contact on track this year, waited patiently for the field to pass by under caution in order to make a displeased gesture toward Newgarden.

Romain Grosjean is NOT HAPPY with Josef Newgarden. #INDYCAR pic.twitter.com/fWDZwVz14U

The inaugural Music City Grand Prix had nine caution flags and two red flags, while Sunday’s race had eight caution flags and one red flag. Although there was one less red flag, there was no shortage of carnage. 10 cars were knocked out of the race, including Pato O’Ward, who entered the race fourth in the championship standings.

Last year’s winner and 2022 Indianapolis 500 champion, Marcus Ericsson, was among the victims. He exited the race with five laps remaining with mechanical issues.

The finishing order for the Big Machine Music City Grand Prix can be found here.

The IndyCar Series will next head to World Wide Technology Raceway for the Bommarito Automotive Group 500, which will air Saturday, August 20, at 6:00 p.m. ET on USA.

I don’t know how Scott does it. The guy seems to always come out of nowhere at the end. Regardless, it is amazing to see someone knocking on the door of the all time greats (and surpassing them). Don’t know if he’ll match AJ’s 7 Titles or 67 wins, but it’ll be fun to watch and experience. Hope Scott has a few more good, competitive years to make it interesting – whether he tops AJ or not.